Venice 2015: walking in the footsteps of pilgrims, from Scotland to the Biennale - a-n The Artists Information Company 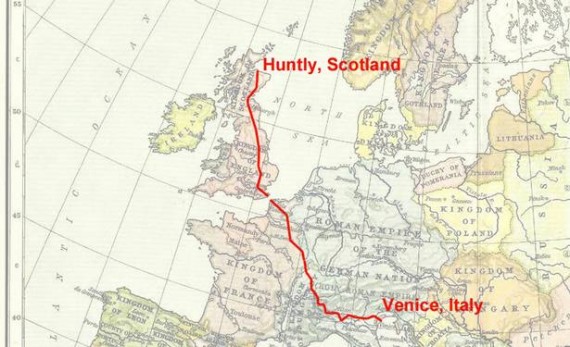 “St Anthony operates as a kind of metaphor, as the patron saint of the lost. He is venerated within the Catholic church as someone who travelled a lot.”

Socially-engaged artist Anthony Schrag does not claim to be particularly devout, but this summer he is, metaphorically-speaking, taking on the mantle of his namesake St Anthony as he undertakes Lure of the Lost: A Contemporary Pilgrimage – a three-month walk from Scotland to the Venice Biennale.

Starting out in June from the project’s coordinating base at Deveron Arts in Huntly, Aberdeenshire, Schrag will map a route to coincide with historic pilgrim journeys, passing through sites of artistic pilgrimage on the way.

“One major thing we are working on is how to navigate the Alps,” says Claudia Zeiske, director of Deveron Arts. “We are looking at the old pilgrimage routes because they have already worked out the best ways of getting from one place to the next.” 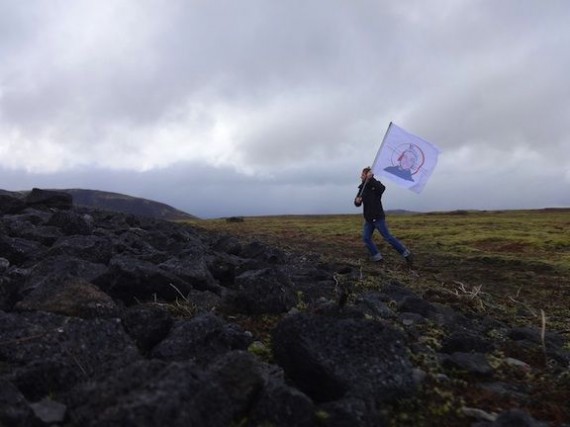 Hosted by artists and arts organisations at each overnight stop, and accompanied by interested individuals at different points along his route, Schrag’s modern-day pilgrimage is very much seen as a social activity.

“It has a lot to do with hospitality,” says Zeiske. “In a similar way that monasteries and local people hosted pilgrims, we are looking for artists and arts organisations to host Anthony. In return, Anthony will bring a token from them to Venice.”

This token is a portable reliquary. Artist-hosts will be invited to send a small artwork or item to Venice with Schrag, who intends to display these works in St Mark’s Square or another unconventional exhibition site within the city.

The walk will culminate with a six-hour descent to Venice, when collaborators and interested members of the public will be invited to join Schrag for the final leg of the journey. This will be a chance for people who have walked with the artist at different points along the way to join him for a celebratory picnic or banquet, somewhere on the streets of Venice.

As part of Deveron Arts’ ongoing cultural health research, a parallel programme of activity will be mapped out in Huntly to consider different sites of pilgrimage within the town and explore people’s relationship to art. Schrag will start his walk from the town on 13 June – St Anthony’s feast day.

From disappointment to enlightenment

The collaboration between Schrag and Deveron Arts comes out of a long working relationship. Since 2008 they have worked on several projects and commissions together, including in 2011 A Perfect Father Day, which looked at the role of the modern father. Schrag has also participated in The Slow Marathon, a social event led by Deveron Arts’ The Walking Institute.

“We both have quite clear ideas about socially-engaged participatory ideas and we work quite successfully in challenging each other in what we can do,” says Schrag.

The idea for Schrag’s long walk came out of what was perhaps an equally challenging process – bidding for the Scotland + Venice commission.

As a curator, Zeiske has been shortlisted for interview several times, and despite the 2015 commission going to Graham Fagen and Hospitalfield Arts, she felt it was the right time for Deveron Arts to do something Venice-related with Schrag. “The disappointment [at not getting the commission] led us to have a lot of discussions and this idea came up,” she says.

Adds Schrag: “We began thinking: why Venice? Why is it such a desired place, why does it occupy this almost sacred site for so many artists? So it became a discussion about that site and that’s where the idea for a pilgrimage came from.

“The walk is really reflecting on a lot of these ideas: the site of the Biennale, how it relates to us and socially-engaged practitioners and curators. Should it be something that we want to go to? And how does it relate to the lives of everyday people that we meet along the way?”

To support Anthong Schrag’s walk to Venice, visit the Lure of the Lost We Fund page.

Anthony Schrag will Skype in from a location on his journey to participate in The Way to Venice talk at St Patrick’s Church, Edinburgh on 30 July 2015

For previews, reviews, blogs and news on the 56th Venice Biennale, follow the venice 2015 tag