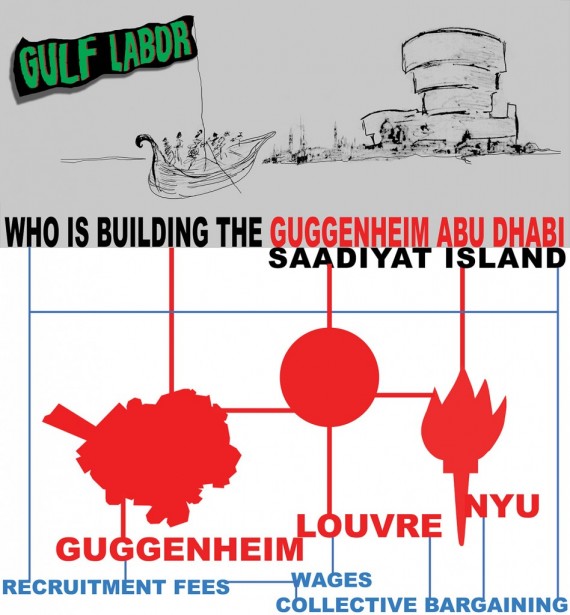 This week sees what organisers are describing as a ‘cacophonous procession’ through Venice in protest at the treatment of migrant workers in the United Arab Emirates (UAE).

The Precarious Workers Pageant begins at 6pm on Friday 7 August and aims to highlight the conditions faced by workers building the new, Frank Gehry-designed Guggenheim Museum in Abu Dhabi.

Starting inside S.a.L.E Docks (located on the South side of the Dorsaduro, Venice), the protest will begin with the deconstruction of a model of Gehry’s new Guggenheim. Pieces of the dismantled museum will then be carried through nearby streets and over canals, passing by the Peggy Guggenheim Museum before arriving at the Galleria dell’Accademia plaza.

The shapes will then be reconstructed to create a stage for a series of testimonials and performances by the demonstrators.

Organised by Workers Art Coalition, Aaron Burr Society, Occupy Museums, G.U.L.F., and Social Practice Queens, the procession forms part of a series of events in Venice addressing the art world’s attitude to the rights of migrant workers involved in the construction of museums on Saadiyat Island, Abu Dhabi.

Friday’s procession also sees the launch of a new book edited by Ross, The Gulf: High Culture/Hard Labor (OR Books). The publication brings to together articles and Gulf Labor research about the Saadiyat Island development, which also includes new outposts for the Louvre and New York University.

Speaking about the planned procession, New York-based artist and writer Gregory Sholette said: “The Precarious Workers Pageant seeks to rekindle the emancipatory spirit of the early, artistic avant-garde. It is also an act of solidarity with those who labour under unjust conditions on Saadiyat Island.”