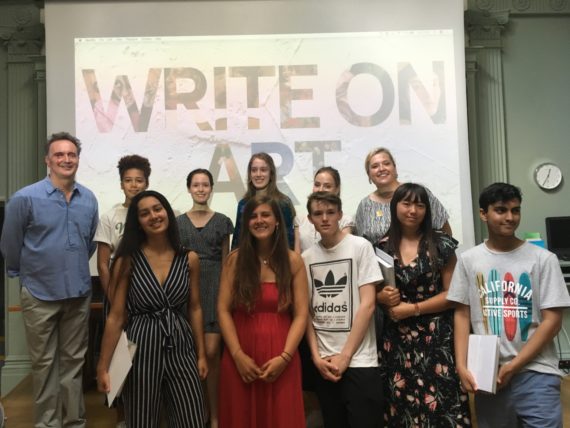 Winners of inaugural ‘Write on Art’ prize announced Launched last year following a decline in the teaching of art subjects at schools and sponsored by Art UK and the Paul Mellon Centre for Studies in British Art, the award is designed to encourage a greater interest in art and art history. For the inaugural competition, 200 students were invited to submit essays covering the topic ‘A work from the Art UK website that fascinates you…’

Finaldi commented: “It is so encouraging to see such talented young writers in their last few years of school. I wish Art UK and the Paul Mellon Centre great success with the prize in future years and hope it will enthuse more young people to look at, think about and write about art.”

Today,they started to demolish my studio “zuo you”in Beijing with no precaution .which I have as my main studio since 2006.it is a East German style socialist factory building.farewell.

Ai Weiwei’s Beijing studio destroyed by Chinese authorities The studio, which is located in Beijing’s outer suburbs, is a former car parts factory and has been Weiwei’s main base since 2006. The artist posted a number of images of the site on Instagram, claiming that he had been given no prior warning of action, with his assistants rushing to remove artwork housed at the space.

Weiwei commented: “Today they started to demolish my studio ‘zou you’ in Beijing with no precaution which I have as my main base since 2006. It is a East Germany style socialist factory building. Farewell.”

According to the Guardian, the rental contract on the space had expired last autumn, with Weiwei planning to vacate it shortly. However, one of his assistants, Ga Rang, told AFP that because the building work began so suddenly it had been impossible to remove some artwork.

Ga said: “They came and started knocking down the windows today without telling us beforehand. There’s still so much stuff inside.”

This is not the first time Weiwei has faced conflict with the Chinese authorities. Despite designing the Bird’s Nest stadium that was at the heart of the 2008 Beijing Olympic Games, in 2011 he spent 81 days in prison after being accused of tax evasion. His supporters helped pay a £1.5m fine, but his passport was confiscated which prevented him from travelling. Following its return in 2015, Weiwei has lived in Berlin.

Employees at the Museum of Modern Art, New York, demonstrate over contract dispute United Auto Workers Local 2110, the union that represents the employees, says it has numerous points of disagreement with MoMA, including health care costs and job security for junior employees. It also wants mandatory salary increases tied to time of service, which the union claims the museum wants to reduce or eliminate.

In a speech delivered to members outside MoMa on 6 August, Maida Rosenstein, the president of United Auto Workers Local 2110, said: “This action is all about showing our solidarity and unity as union membership. We’re going to do it again and again and again until they make a fair contract offer.”

As Artnews reports, MoMA has responded to the action by saying: “MoMA’s extraordinary staff are the best in the world. We are committed to working with the Local 2110 to reach an agreement that will keep our community of dedicated staff and the museum on a path of financial stability and future growth.”

Grants to individual artists down as National Porfolio Organisations receive three-quarters of Arts Council England’s Lottery grant expenditure £353m of Lottery grants, out of a total of £465m, were awarded to NPOs last year, with ACE also distributing £310m from government Grant in Aid, which supported both NPOs and Major Partner Museums. NPOs also received the majority of funds from ACE’s Strategic and Capital Lottery funding.

As Arts Professional reports, the only Lottery funding stream where artists and non-NPO arts organisations took the largest share was the £64m open application Grants for the Arts and Culture (G4A) scheme, which now represents just 14% of all Lottery expenditure. Back in 2010/11 this was significantly higher, at 77%, when open access grants to individual artists and smaller companies, in support of new work and creative participation, formed the largest proportion of Lottery funding.

In a somewhat controversial move, the £465m Lottery expenditure is significantly more than ACE’s income from Lottery ticket sales, which totalled £228m last year. The gap in funding will be made up by future Lottery income and ACE drawing on reserves it has built up by underspending in previous years.

Bristol-based film culture and digital media centre Watershed announces changes to leadership roles The changes include Clare Reddington taking over the role of CEO, leading the organisation alongside executive director Miriam Randall. Current CEO Dick Penny will shift to the leadership of Watershed Ventures, a new subsidiary of the organisation with a focus on plans to increase capacity and developing new ways of contributing to creative growth in the Bristol city region.

Reddington joined Watershed in 2004, working on its Creative Technology and international programmes, and she will continue as creative director of the organisation alongside her new position of CEO. Commenting on the changes, Reddington said: “I am excited and humbled to be taking on a new challenge within an organisation I love, but have every confidence that Miriam and I are more than ready to work with our excellent team on the next stage of Watershed’s journey.”

Penny added: “In the 15 years I have been associated with Watershed, I have seen the organisation grow significantly in its confidence, stability and reach. This growth creates many opportunities for the future, to continue Watershed’s role in developing talent and audiences across the arts and technology, locally, nationally and internationally.”

Lords report recommends EU-wide touring visas The report, which was published last week, says that the UK government should ‘seek a commitment for an EU-wide multi-country, multi-entry short-term touring visa for UK citizens, and offer a reciprocal commitment for EU citizens when freedom of movement ends after Brexit’.

The visas being proposed would allow self-employed people working in the cultural sector to travel for short-term visits between the UK and the EU on short-term contracts to tour and work.

The report also stresses how important reciprocity will be in negotiating future arrangements with the EU. It says an agreement on ‘reciprocal principles would, we believe, be the best foundation for a workable future migration compact. This could include reciprocal social security contributions where the Government should guarantee that EU citizens travelling on short-term contracts to the UK after the transition period will not pay into its social security system’.