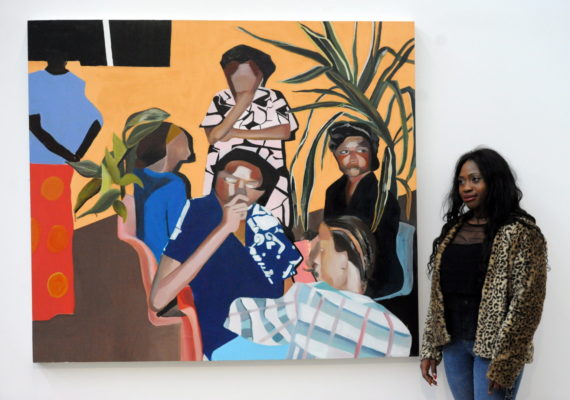 Joy Labinjo has won the Woon Foundation Painting and Sculpture Art Prize 2017. The Newcastle University fine art graduate receives a £20,000 fellowship which includes a 12-month studio residency in the Woon Tai Jee studio at BALTIC 39 in Newcastle city centre. She will also receive mentoring from staff at Northumbria University and BALTIC who jointly host the prize.

Labinjo, whose work draws on personal experiences and situations to explore the complex relationship between identity, race and culture said she was surprised to win the prize, but happy to be able to carry on her practise in “such a great environment and with great mentors”.

“It is amazing to have such a fantastic opportunity, she said. “I had intended to carry on painting after graduation but that would most likely have been with a full-time job, painting as and when.

“It is also such a blessing as I don’t have to commercialise my work and can carry on working large scale and now have the opportunity to decide what kind of artist I want to be. My work has developed a lot over the past year and I am very much looking forward after a year of extended support.”

An exhibition of works by the ten shortlisted artists continues at BALTIC 39 in Newcastle until 6 August 2017.

Oriele Steiner has been announced as the recipient of New Contemporaries’ studio bursary with The Royal Standard and Bluecoat in Liverpool. She receives a studio for one year within the supportive environment of The Royal Standard where she will continue developing her painting and drawing practice.

Steiner, who describes her work as about “being human, and our special ability to feel love, pain, anxiety and suffering”, received a BA in Fine Art: Painting from The University of Brighton in 2015. She was selected for Bloomberg New Contemporaries in 2016, and was recently artist in residence at Los Artistas Del Cortijo in Granada, Spain.