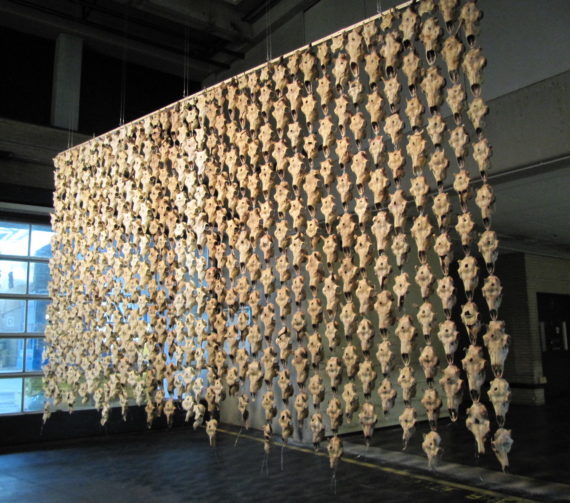 I spent two full days at this year’s Documenta as part of the AN bursary scheme. Amongst the grand set pieces in the main venues I found some of the “quieter” artworks in side rooms to be equally if not more thought provoking. The Neue Galerie seemed to hold keys to the whole event with a selected exhibition of art from previous Documenta festivals and also from the Galerie’s collection. The artworks here provided ways in to some of the main themes of the festival arising from its dual setting this year in both Kassel and Athens. Underpinned by the Syrian war and migration across Greece and into Germany, many artworks explored ideas of conflict, journeys and seeking connections across different cultures. 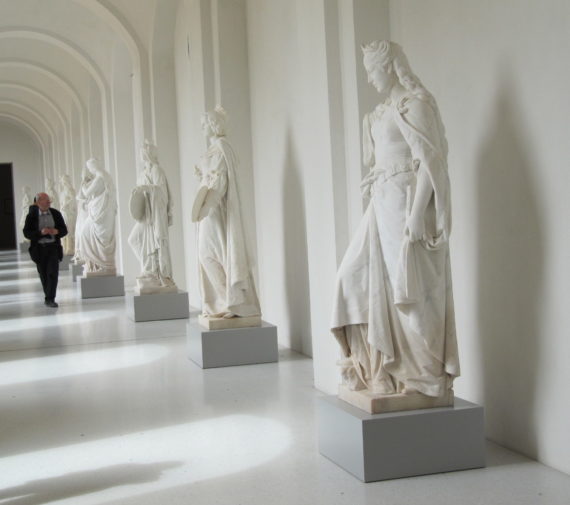 Opened in 1877 the Neue Galerie dates from the days of the German empire and a starting point for me here was a set of marble figure sculptures, “Landerfiguren”, created around this time. These eight allegorical sculptures represented European countries, the “Nations of Art”; ancient Greece, Rome, Italy, France, Germany, Spain, the Netherlands and England. They embody the politics of their time, of strong institutional nationalism and empire, the Western “tribe” that is more cultured and more powerful than the rest of the World. The marble figures are displayed for Documenta next to 3 brass and bronze sculptures stolen by the British during the looting and destruction of Benin after the partition of Africa, again in the late 19th century. Together they raise issues around the relationship of art to political power and symbolise ownership of culture, land and people.

Head of the mother of a queen
ca. Second half nineteenth century. Benin Bronze.

The two different types of sculptures displayed alongside each other tell a story about exclusion, exploitation and colonial legacies that echo across the World even today. In another room at the Galerie is a fascinating display that brings together indigenous Navajo weaving with hi-tech computer manufacture. Hanging on the wall are two traditional hand weavings made by Navajo artist Marilou Schultz. Brightly coloured with intricate linear patterns, we discover that they are the result of commissions to weave replicas of printed circuit boards and computer chips. The weavings are built up thread by thread with no overall planned design and a central display case shows how this particular culture’s dexterity and complex pattern making was exploited by an American company. 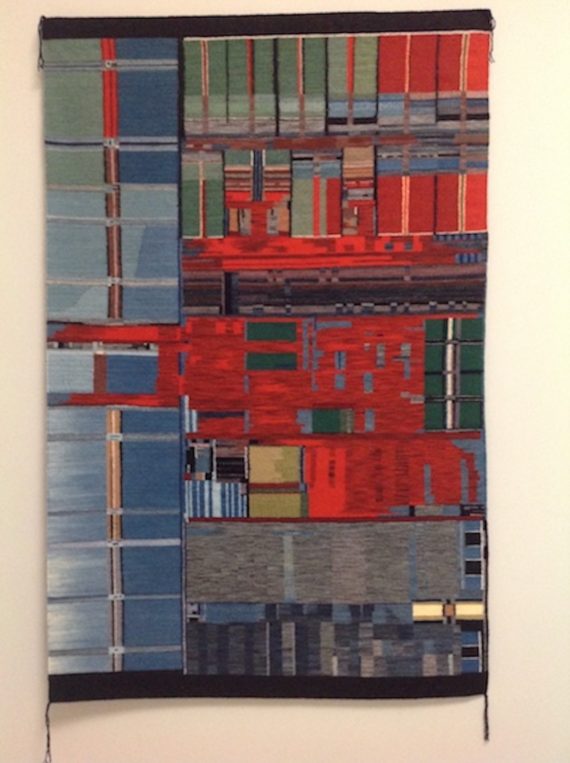 Between 1965 and ’75 Fairchild Industries employed Navajo women in New Mexico to make integrated circuits and other computer components. The company stated that they saw a relationship between the skills and aesthetics of Navajo weaving and the pcb designs, resulting in this incredible combination of cultures. However, the archival display includes newspaper clippings about how the increasingly unhappy employees went on strike over exploitative working conditions and were finally sacked by the company.

Another artwork dealing with threats to indigenous ways of life is Maret Anne Sara’s Pile o’ Sapmi on display in the Neue Neue Galerie, an exhibition space in the loading area of the old Kassel post depot. Sara’s artwork comprises a suspended curtain of reindeer skulls, a porcelain skull necklace, 2 lightbox images and a series of documents relating to a Norwegian court case about state enforced reindeer culls. One of the photographs, taken in 2016 shows the pyramid of reindeer heads dumped as a protest outside the court building in Norway during the trial. 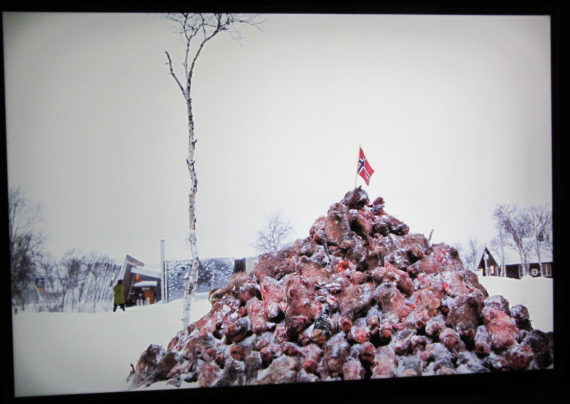 A member of a local Sami artists group, Sara uses her artwork to extend the protest about how such culls damage livelihoods and can erode regional culture. The image of the reindeer heads is displayed next to a sepia photograph of a mountainous trophy pile of buffalo bones from a mass cull that took place in the 1800’s in Western Canada. The scale of slaughter is emphasised by a man standing proudly beside the bones, which rise to perhaps 6 times his height. The contrast between the buffalo bones in black and white and the vivid colours of the reindeer head pile present death ancient and new: the blood and flesh reminds the viewer that the stench of death would have been overpowering. 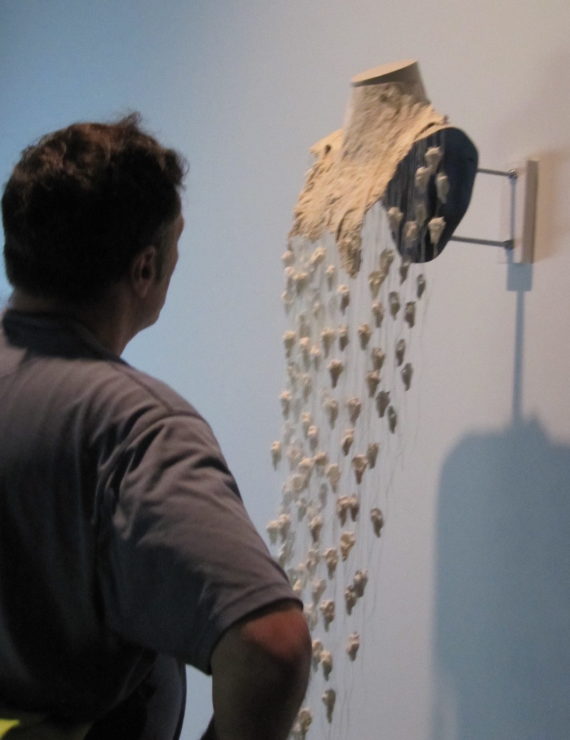 Buffalo bones were ground down to be used in fine “buffalo bone” china; Sara makes this connection with a specially commissioned and prestigious looking porcelain necklace made with ground reindeer bones. The whole artwork is brought together by a horribly beautiful curtain/Sámi flag of reindeer skulls, in which upon a double take you can see the perfectly placed bullet holes in the centre of each forehead. A powerful metaphor for a long history of colonial brutality across many countries.

Animal deaths are used in Sara’s artwork to make wide ranging political comment about exploitation and loss of indigenous ways of life. Cambodian artist Khvay Samnang explores these issues in his video work in the Naturkunde Museum. Preah Kunlong is about the relationship the native people from the Areng Valley have with wildlife and the land they inhabit. The large scale double screen video shows a dancer wearing different wicker animal and bird head masks. We see the man/animal/bird moving in dance patterns through the panoramic landscapes. The artwork looks at how the Chong people map their landscape through the body and spirit, connecting to the lives of animals. The hills, forest, rivers and land boundaries are explored and explained through these ritualistic moves rather than as lines and shapes drawn on paper. 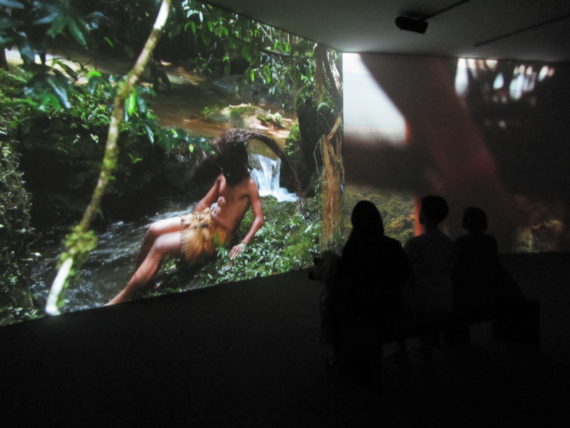 The camera moves with the dancer, and pans from sweeping panoramic views of him as a tiny figure in the landscape to focus in on the sweat and pores of his skin. The work speaks about how people can exist as a part of the land, about a different way of seeing, an “alternative knowledge”. The artwork is made poignant by the power of the dance but more so upon reading that the motivation behind the artwork was a project to build a new hydro- electric dam, threatening to eradicate the Chong way of life and their particular connection to the land.

Ideas about different ways of seeing and bridging the communication gap arise when looking at Abel Rodriquez’ botanical drawings of forest plants and trees in his native landscape of the Amazon. These intricate detailed drawings are notated with information about colour, taste of the bark, when and where each plant grows etc They were drawn by the artist to help inform a Dutch NGO making a study of the local jungle in order to help protect that environment. They are drawn from memory and as such are embodied with the knowledge and traditions of the Muinane culture, reflecting a different way of seeing connected to how plants are used in everyday life for both practical and ritualistic purposes.

Abel’s works are as beautiful as Victorian botanical plates and his use of drawing to share his knowledge of the natural environment with Western scientists creates a unique cultural crossing point, one he consciously makes an effort to bridge. 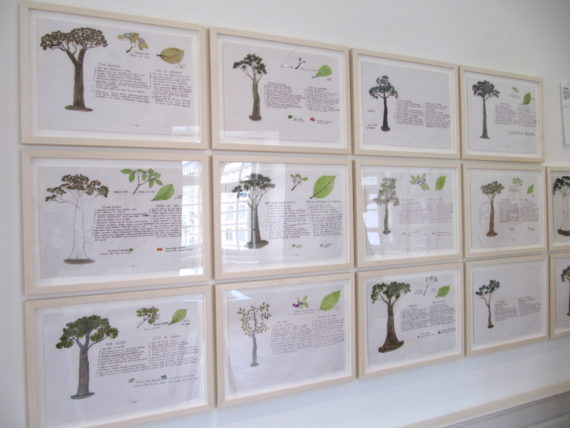 Documenta has ambitions with its Athens – Kassel collaboration to demonstrate the links that art can form between different cultures. These artworks and Documenta in general has made me think again about the relationship between artwork, narrative and our collective histories; about how art can be used to challenge set ways of thinking and being, with the most successful artworks being those where aesthetic, history and concept are inseparable but not overstated.