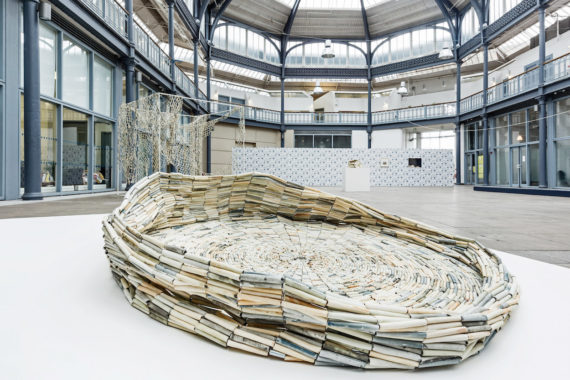 Miniscule bone-like fragments woven into skeletal forms foreground ‘Code-Switching and Other Work’, Montreal-based artist Nadia Myre’s solo presentation curated by Mother Tongue. The fragments are actually imitation ceramic pipe stems; pre-packed clay tobacco pipes were the first disposable products, an item where burgeoning colonial powers and early capitalism converge. When consumed the pipe’s stem was snapped off, discarded and turned in to what Myre calls ‘archaeological refuse’. A descendent of the Algonquin of the Kitigàn-zìbì Anishinàbeg First Nation who used tobacco as medicine, Myre has reclaimed this colonial legacy by skilfully working the pipe shards into baskets, ropes and a net.

Despite the eerie material, life is in abundance in Myre’s sculptures. Catching an interpretation of these forms is comparable to memorising the rhythm of a powerful wind as it gusts, lulls and rattles. The skeleton is the final remains of a vertebrate, the full stop of life, flesh mulched into earth and the spirit untethered. Yet the skeletal net could be full of fish and the baskets open to receive a crop of cured tobacco. The Algonquin who once wove these objects to survive are gone but here we can see their handiwork in Glasgow, a merchant city built on the riches made from the medicinal tobacco taken from them.

On one side of the gallery a photographic diptych of a clay pipe and a collection of pipe shards take on an ethnographic hue. Underneath, a rope of pipe shards lies along a low blue plinth. Animated during a performance, the shards break into smaller pieces as the chain is slapped down, made to ripple and crack. The agitation of the rope contrasts with the silent diptych, the rope looking reptilian one moment and like ripples of water the next. The effect of the performance highlights how limited the photographs are with their one-dimensional perspective.

Unlike Myre’s spirited sculptures, the spoils of tobacco are interred in bricks and mortar; the neoclassical facade of what is now the Gallery of Modern Art (GoMA), just as the beaver was flattened into soft velvet for Europe’s most desirable top hats. Forged from the raw materials of the ‘New World’, top hats and tobacco symbolise the beginning of the ruthless capitalism we recognise today, where the earth is just part of a supply chain. The individual elements of this story pattern a wallpaper at the back of the gallery, providing a static backdrop reminiscent of pastoral scenes painted on Delftware. 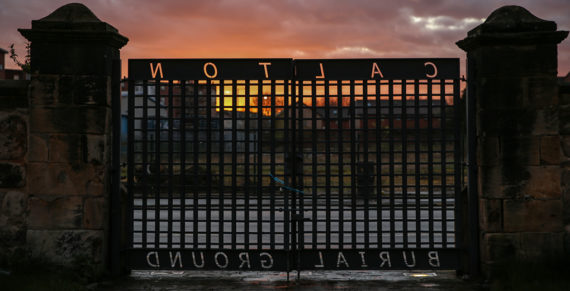 Early capitalism is further considered in Georgia Horgan’s audio guide Saturday. Available to listen to on a smartphone via the Glasgow International website, it takes place in Calton Burial Ground where six weavers are buried, killed by the British Army in Scotland’s earliest industrial strike in 1787. Saturday is a development of the Glasgow-based artist’s performance, installation and screening for Glasgow International 2016 that was situated in the cemetery and took the same title.

Walking away from the weavers’ moss-covered tomb the recording unravels the context of early capitalism through histories of witchcraft and religion. The listener is led around the graveyard by a guide that moves from witchcraft to the intriguing semi-monastic medieval Beguines and back to the weavers’ tale. This refusal of linearity is reminiscent of the way Myre’s sculptures defy a fixed meaning. Through the audio guide Horgan emphatically highlights connections between industrialisation, worker uprisings and witchcraft. Witches, the guide explains, were often women working in the textile industry who could earn their own money and the theorist Silvia Federici has noted the relationship between early industrialisation and witch trials in Caliban and the Witch.

It seems sharing these findings is limited to text or an oral account because of a lack of material history. For the previous Glasgow International Horgan fabricated ‘shaming hoods’ for sex workers based on historical accounts of items that fitted a similar description. In response to this work, the writer Izabella Scott asked Horgan about the responsibility of the artist to imagine pasts that have been purposefully prohibited from leaving a trace. Horgan positioned herself by summarising: “Nobody thought: ‘I must keep that for the annals’.” ‘That’ being an object symbolising a person not worthy of document and ‘nobody’ meaning the gatekeepers of what is considered to be knowledge.

This re-evaluation of history means Saturday and ‘Code-Switching and Other Work’ provide vital historical primers for the conditions that have led to other GI projects, such as ‘In Kind’ which draws attention to the implications of unpaid labour in the art world, and ‘(Re)imagining Self and Raising Consciousness of Existence’ curated by Yon Afro Collective, which looks at the identities and practices of black female artists in Scotland.

Myre and Horgan have used history’s wilful ignorance to create work that frees alternative tales of early capitalism and colonialism from authoritative accounts. By doing this, contemporary power structures are illuminated instead of staying implicit. Understanding how these power structures developed is important in the context of Glasgow International where other artists are exploring the impact of capitalism and colonialism in their various contemporary manifestations. From different starting points, both Myre and Horgan propose that the historical is always present in our current discussions about race, class and gender.

Nadia Myre: Code-Switching and Other Work, is at The Briggait, Glasgow G1 5HZ; Georgia Horgan: Saturday – an audio guide, is at Calton Burial Ground, Glasgow G40 2DD. Both continue until 7 May 2018

Laura Davidson is one of eight a-n members selected for the a-n Writer Development Programme 2017-18. For more information on the writer programme, and to read more of the latest cohort’s work, visit the 2017-18 programme’s blog on a-n.co.uk or use the a-n writer development programme 2017-18 tag