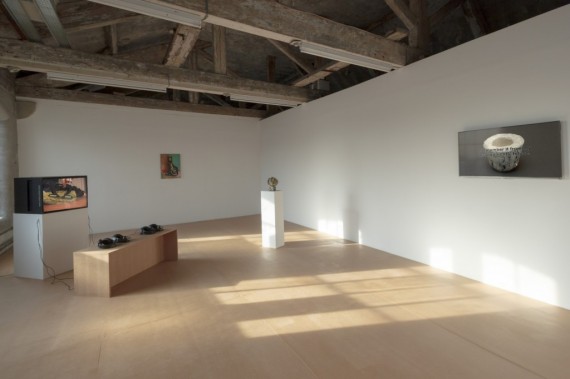 Presented upon a newly installed MDF, Ground presents two practices that both highlight the permeable nature of the self-imposed ‘categories’ of art as well as the importance of objects within life. We see many crossovers and mutations between John Smith and Paul Housley’s work – most notably ‘sculpture’ and ‘performance’ – as well as presenting us with examples of the emotional significance we develop with ordinary things.

Smith’s two video pieces resonate with great clarity, seemingly whispering the intricacies of how to see life as a performance. A heart-warming ode to his father (yet perhaps also somewhat melancholic), Dad’s Stick is a deeply satisfying assembly of colourful images and ephemeral sounds, with a sharp tempo between the two. The video acts as a poetic storyteller for the way Smith’s father interacted with the world, most notably, his time painting. At first the language used has implications that the man in question is a painter in the more ‘artistic’ sense of the word. And what first appears as ‘artisanal’ reveals itself to be the work of a D.I.Y enthusiast. The images seen depict the stick mentioned in the title, used for stirring paint. Having cut off one end, a rich, nacreous vision is found from the many layers of paint used; it becomes a potent metaphor for life and the many parts of one’s personal history. In fact, all of the personal objects that Smith reveals of his father show how objects can mutate to create deeply artistic and thought-provoking sculptures. These can echo throughout life, and clearly Smith’s relationship with his father is what gives these things importance.

In a more humorous take on the idea of life/object/performance/sculpture, Smith’s unusual Red cardigan is the tails of the coin where Dad’s Stick is the heads. unusual Red cardigan is a documentary-style work detailing the interactions Smith had with a woman he had never met – the only exchanges being the buying/selling process on shopping site eBay. The video is an amusing realisation of how commonplace technology puts us in a position where we share basic and important information with everyone and anyone – even people who we never have any real contact with. The premise behind the work is that Smith found this particular eBay user selling a VHS copy of The Girl Chewing Gum (1976). Smith then went on to buy several other products the user was selling, creating a strange, cyclical loop of silent conversation between two strangers. While Dad’s Stick shows the emotional significance of personal objects, unusual Red Cardigan reveals that objects can swap and exchange between hands, revealing only specific details about someone who once owned them. We can see this exchange as a sort of collaborative performance between the artist and the unknowing member of the public, and only strengthens the idea of life as performance.

Conversely, the paintings of Paul Housley demonstrate his evident interest in the significance of objects. While I feel the time-based medium is at times more successful in generating an ‘atmosphere’, encouraging audiences to spend time with, in the case of John Smith, his personal storytelling, Housley’s paintings equally show how one can develop a connection with simple things. His work presents seemingly commonplace objects painted in a thick and expressive manner in such a way to reveal an object’s ‘energy’. Housley’s mark-making shows a sort of devotion; clearly time and effort have been given, suggesting the importance these objects hold. For the viewer, these objects may have less significance, less worth compared to the artist, but purely from the act of painting them in such a dedicated manner, Housley shows us that (for him at least) these things are worth something; they mean something.

Black Cat Ornament could make you think of any simple trinket for the shelf. However, the way in which the artist has painted the image shows pure vibrancy and liveliness; the colour scheme is bold and bright – not too dissimilar from the bright greens and pinks associated with the rave scene. There is a true connection between Smith’s videos here; the whole essence of objects is questioned, bringing up the notion of attachment that people develop for things.

Similarly, the particularly rough and dry looking marks on Bold Deceiver create a sense of vibration – the object seems to be in a state of flux or metamorphosis. The title alone ignites curiosity as well; in what way are we being deceived? What is it we are supposed to believe?

The piece by Housley I was most drawn to was Painters Hands. This curious painting/sculpture hybrid creates and inhabits it’s own space within the exhibition, and really shows the crossover between the two artists’ work. It adds a sense of remembrance, as if it were some memorial or dedication to something past – and of course brings up associations with Dad’s Stick. It stirs a whole array of connotations; what hands might mean to you, memories of touch and interaction, the way the two hands meet and meld together creating a deeply sweet feeling of intimacy, and how it reminds us of what it actually means to physically interact with another object or person.

The first Ground exhibition provides a profound, quiet, and intimate space where I was able slow down and remember my own connections in life, whether that be meaningful things in my home, the strangers I pass by everyday, or loved ones.  A refreshing mix of humour, nostalgia, and the whimsical, with visual, aural, and spatial energy that in all, provided a sense of pleasant catharsis.