Q & A with Emily Peasgood - a-n The Artists Information Company 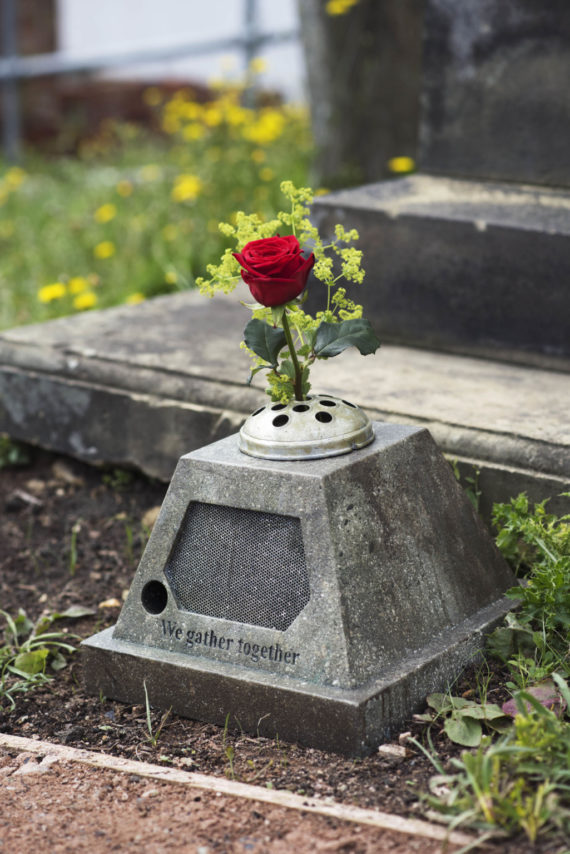 ‘Halfway to Heaven’, is located in a raised Baptist burial ground. Visitors trigger the hymn-styled recordings of several narratives, inspired by the people interred there until around 150 years ago. This was a small community of Baptists permanently isolated in death, forbidden to be buried in the local Anglican cemetery. As geography and development would have it, the grounds were originally located on a steep cliff. Gauged over time for housing development, the burial ground is now its own little island perched about 20 feet above street level. Peasgood invites the public to reconnect with this oddly placed, lost community of the dead, affecting a poignant reminder of the shame of religious segregation.

Curator Lewis Biggs explained that he found the spaces first then selected an artist for each space. How did he come across your work and fit it with the burial ground?

I first heard of Lewis when I was participating in Alex Hartley’s ‘Vigil’ installation for Folkestone Triennial 2014 which involved sitting on a series of camping ledges, suspended from outside Hotel Burstin’s top floor. I sat up there and composed music and thought of it as extreme composition. Afterwards I contacted Lewis to introduce myself and ask about the 2017 Triennial. It was cheeky, but worth it. We met and discussed ideas over a one year period. Then he told me about the Baptist Burial Ground and I knew I had to have that site. I could almost hear what I would compose and install! I proposed an idea, and he agreed to it.

The libretto includes specific names like Joseph and Maria Parkins. How did you access these people when the aged tombstones are barely legible?

This was very difficult. I had a few documents from the Folkestone Baptist Church that provided grave markers and found other documents online. But they rarely correlated. I realised this was because records for nonconformists were rarely kept in the 18th and 19th centuries. I sourced further books on the site and did some gravestone rubbings to find names that matched the documents. What pieced everything together, enabling me to have accurate historical facts about the people buried there, was a genealogy website of nonconformist records.

What was your approach to deciding how to frame the piece?

In the early stages of research I frequently visited the Baptist Burial Ground. One time I lay on the ground and looked at the sky. The line: ‘united, underneath the stars’ came to me and I realised that it summarised how we are all the same, in life and death, so I knew this had to be an important feature of the work.

Numbers are also a big thing for me. I tend to be obsessed by specific numbers and shapes, and decided to use five audio channels and speakers to form the five points of a star – both symbolically and physically. This would provide an optimal listening arc within the site, with the speakers at an appropriate distance to resonate independently but also to sound good together, and the area in between could be a listening platform for visitors.

Following a 6-month research period, I decided the lyrics would speak of the history of the site and contain a love story about Thomas and Susannah Bayly who were interred there. It’s written in the folk style common to the 18th and 19th centuries. They meet, fall in love, learn from each other, grow old together and when they die, they’re buried in the place they met, underneath the stars. It’s how I view what I want from life; a loving partner who I can learn from. It’s also how I view life and death: ending up in the place where we started.

I was still unsure how to express these sentiments and decided to work with co-librettist Kate Harwood and, later, with Elli Rudd and Daniel Wright-Hadley. Once complete, I composed the work alone over a two day period, day and night. I prefer this and am always surprised by what comes out when I’m under physical duress.

The memorial urns containing the speakers were fabricated by Darius Wilson. Their inscriptions are lyrics which summarise key sentiments I’m trying to portray. My focus is on community and equality; values that are not only important to the Baptists but to all of us, today, regardless of our background and identity. In ‘Halfway to Heaven’ all are equal regardless of their background, identity, beliefs, life or death.

Your work is very broad ranging, from choir to orchestra, re-imagined pop songs to working with sign interpreters. Was it always your intention to work in a very experimental way?

I consider myself an experimental artist who works with sound, illustration and sculpture. One way I could summarise my work is challenging what music is believed to be; from how it is perceived to who performs and experiences it. I believe very strongly in community; working with communities of people to create music, and perform it in ways that are accessible, collaborative and inclusive. I tend to steer clear of western classical music, primarily as historically male composers have received privileges female composers have not. I suppose what I do now is a culmination of everything I have learned in my life including my training in dance, opera singing, music technology and acting.

What’s next? Back to focussing on your studies and teaching or more projects in the making?

I’ll soon complete my PhD. I occasionally lecture at Canterbury Christ Church University and have a number of commissioned projects in the pipeline. One personal project, particularly close to my heart, is to create a protest against sexism in western classical music. I wish to record female flatulence in a number of pitches and recreate a seminal classical work by a male composer. Another project is working with interactive technology to create a listening experience that’s physical and embodied. I believe in creating art that deeply impacts people. When this happens, I feel I have succeeded as an artist.

Folkestone Triennial is open daily and runs until 5 November 2017. Emily Peasgood’s performances are on Sunday 22 October and more information including location, times and booking can be found at folkestonetriennial.org.uk or emilypeasgood.com. (Photo credit – Emily Peasgood, Halfway to Heaven, commissioned by the Creative Foundation for Folkestone Triennial 2017, image by Thierry Bal.)