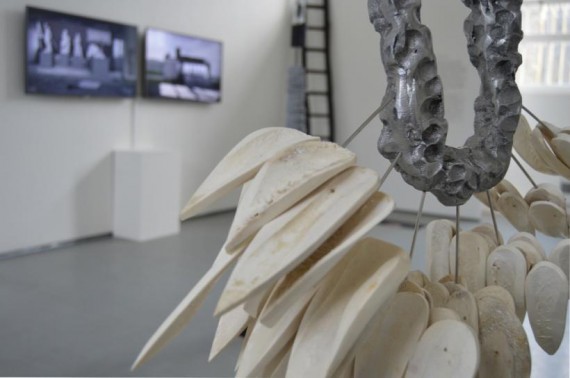 A thin place is a landscape’s anomaly, sometimes signified by burial mounds or standing stones. It’s believed – in Celtic folklore, primarily – to be a site of transcendence, where the division between this world and another is particularly thin. In an intriguing move, Ciara Healy has deployed thinness as a curatorial strategy, promoting a reinstatement of “conjecture” over “rationalism”.

Jonathan Anderson’s Pylon Totems (2015) congregate in a thick, threatening crowd: twigs bound and clad with earth, tar and bitumen. At once ancient and contemporary, each idol pays dark homage to that most modern emblem: the electricity pylon. An artist who regularly works with oil and coal dust – stuff of the earth – it’s not surprising to learn that Anderson has North Sea drilling in his family history. Pylon Totems, mucky and visceral on the outside, hints at the underlying social and spiritual history of fuel and power, in a country where mining has taken a toll.

Physical presence in the landscape directly informs the work of two artists in the show. Master ceramicist Adam Buick identified significant neolithic sites along the Pembrokeshire coast. Walking to each location, he exchanged a stone or found object for an unfired ceramic pot, which was left to dissolve in the elements. Votive Jar Walks (2014) is a series of photographs: a beautiful but distancing record of his extraordinary act. Artist and researcher Christine Mackey made repeated walks across Ireland over two years, collecting wildflowers then extracting their colours using chromatography. These mesmeric liquids are on display, captured in test-tubes, along with Colour Studies (2014), abstract paintings created as evidence maps of each walk. Perhaps deliberately, the clinical vials and colour wheels seem a little discordant with the embodied experience of the land from which they came.

Flora Parrott invades the gallery with peculiar arrangements of objects. Employing natural materials including bone, wood and sand in contact with photocopies, glass and aluminium, her work uses a rich but puzzling vocabulary. Cave Ladder (2014) extends out of the gallery space and Stalagmite Sculpture (2008) is a steel rod collecting plywood pebbles, string in a grid and other objects. It feels like her work would be playfully, dangerously tactile in cave darkness, but in daylight, the effect is confounding.

Ailbhe Ní Bhriain’s video works are the most bewitching element. They’re somewhere between a high-definition hallucinatory dream and an interminable loading screen for an uncanny computer game. Displayed on screens in crisp black and white with an eerie soundtrack, Great Good Places IV & V (2011-2014) depict seascapes and landscapes, subtly overlayed in segments by the deserted interiors of houses, museums and offices. Birds, a dead fox and floating detritus behave as visual cues, animating the still spaces. Ní Bhriain invites a slippage between screens and spaces, inside and outside; she shows us things half forgotten and a place that is thinner than pixels.

Appropriately, the publication accompanying the exhibition is prayer-book sized, with gilt-edged pages. Inside clamour a diverse and sometimes confusing medley of voices, with writings on astrology, astronomy and Franciscan worship. It’s possible to lose clarity of vision here, but Thin Place is not intended as a clarification on boundaries, but a dissolving of distinctions, a waymarker that complicates the route.

“This island is crazy. It’s all like a dream,” Morven comments, on finding herself on the ‘Outer Rim’ of the Hebrides, in Alan Warners’ mythopoetic These Demented Lands. A disorienting sense of place is key to Warner’s allegorical narrative and it is absolutely critical to Thin Place. Carmarthen is one of Wales’ oldest towns, and myth names it the birthplace of Merlin, wizard of Arthurian legend. Oriel Myrddin itself is sited on Church Lane, a breath away from St Peter’s Parish Church opposite. Presenting artists with Welsh, Irish and Scottish heritage and thus Celtic cultural memory, in a place already imbued with mystery and prehistory, Healy draws us a map of thin places and thin practices, suggesting connections between the two.

On encountering a thin place, rarely does a visual sign alert its presence. Instead there’s a peculiar, instinctual, bodily sense: a prickling awareness that cannot be described but is there nonetheless. It might happen on a Hebridean island, in a church built on ancient ground or an unexpected corner of a city. The most powerful artworks here are the ones that don’t require a cerebral response, but incite a similar ‘gut’ reaction: Anderson’s dark material and Ní Bhriain’s otherworldly films.

In the catalogue, Irish poet Cherry Smyth recalls a surprising, interrupting memory that does “insist / like a film I can’t walk out of”. That’s another thing about thin places. Leaving the exhibition, and on the journey home, that odd feeling stayed, long after I left.