It has been a few months since I have written a blog post. As expected my studies have been dominating leaving very little time for the creation of new art works. My brain has been firing on all cylinders though […]

I used the paint colour-matched with ‘Oro Antico’ (paint thrown out after a relationship break-up) mixed at Seagulls Recycled Paint to ‘repair’ some torn pictures from discarded/recycled materials (Ikea advert and Suez recycling leaflet). I was originally thinking to carefully […]

I had my initial meeting with the team at Brighouse Recycling Centre yesterday and bought a giant fibreglass yellow pepper for 50p from the on site ‘Revive’ shop at the recycling centre which intercepts items destined for the skips. The […] 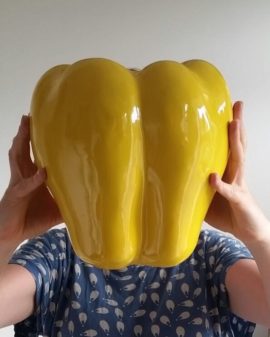 I’m artist in residency at Brighouse Recycling Centre for Brighouse Festival 2018. I will be working on site researching and and undertaking Rubbish Conversations leading up to the Festival (5-14th October), culminating in a performance on site and exhibition at Brighouse Library

I very pleased to be involved in an upcoming micro residency / group show Residual Projects at South Square in Bradford this December/January. There are 7 artists doing 6 week-long residencies looking at the residual layers of creative spaces and […]

Currently watching: The Mafia Is Trashing Italy… Literally (2009) VICE Film footage shows the mountains of garbage bales with commentary on the scale of the issue in Naples and the surrounding Campania region. Interviews with farmers from the affected regions […]

After a long and painful period of illness, I’m very happy to be able to resume studies this week. I’m reacquainting myself with my own research and recommencing my thesis first draft. Things to distract me from the task at […]

After a long and painful period of illness, I’m very happy to be able to resume studies this week. I’m reacquainting myself with my own research and recommencing my thesis first draft. Things to distract me from the task at […]