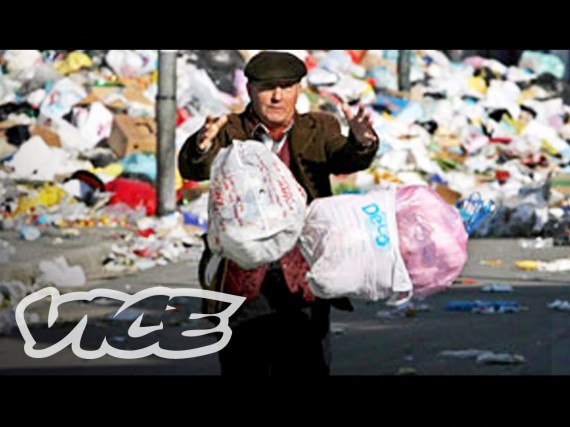 Film footage shows the mountains of garbage bales with commentary on the scale of the issue in Naples and the surrounding Campania region. Interviews with farmers from the affected regions disclose the problem of lack of management of toxic waste that has been illegally dumped by the Camorra mafia, allowed by the corrupt Berlusconi government. The author of Gomorrah [Gomorra], Roberto Saviano, claims the Camorra are the wealthiest business in Italy with profits exceeding that of Fiat

The people protest in the street but the government do little to remedy the crisis and send armoured police and tanks who use tear gas and violence to control the otherwise peaceful protests, and press conferences are evaded.

The government promise to build incinerators in the region to deal with the epic amounts of garbage but concern is raised over the amount of waste the incinerators can process, over how much is already accumulated and how much the region will produce, not to mention that toxic industrial waste is mixed in with the household garbage due to be burned and released into the atmosphere.