Here are my notes from this talk via youtube:

Susan Strasser talks about the relationship between waste and creative process: The central point of her book Waste and Want is that of hand work to machine work. Hand work involves a knowledge of what to do with waste and skills for fixing and the saving of materials for fixing and making have been lost. Bricolage is considered something artists do, not what everybody does, and the role of the artist involves a different relationship to the material world.

A poignant phrase comes up: Waste of time. There is a critical relationship between time and consumerism and waste.

Robin Nagle takes about Mongo collection and reuse as a creative process.

Elizabeth Royte talks about artists working with recyclable materials and

her impatience with the the belief that such practices are doing the earth some good in their negligible magnitudes.

Strasser talks about Picasso and Braque as some of the first celebrated fine artists making collages from rubbish and historically contextualises it as during “that same transitional period, when it used to be something everybody did. You used found objects all the time. So during that transition, when people were not doing that so much, then it became elevated to something that artists did.”

William Kupinese talks about his research into around the same time on James Joyce’s Ulysses, a book that tries to represent the detritus of contemporary, or then-contemporary, consciousness. http://en.wikipedia.org/wiki/Ulysses_%28novel%29

Kupinese asks is there a risk of aestheticising “garbage art”?

Nagle on our use of language: “I’ve always been curious about how we have decided that our garbage is repellent to us, and continue to create it in such massive quantities with such speed and persistence. I mean, the lovely English construction—we “throw,” which is very emphatic, “away,” which is very vague, our trash.”

Nagle on Michael Thompson’s Rubbish Theory: “He puts forth the idea that value is in fact on a continuum. He puts it in a triangle of how things move from being valued to being rubbish to being in a transitional stage in between being worthless and being valuable.”

Royte on Don DeLillo’s novel Underworld: “He [the protagonist] is a waste technician; he looks at everything before he buys it and imagines what kind of waste it will make, even before he decides to buy it.” According to Wikipedia; Underworld is a non-linear narrative that has many intertwined themes. A central character is Nick Shay, a waste management executive. http://en.wikipedia.org/wiki/Underworld_%28DeLillo_novel%29

Royte on examining her own rubbish: “When I was going through my garbage for my book, I was ashamed about my garbage because everything in there represented some sort of failure.”

This last note is very relevant to HOARD. One of the things that appeals to me about the collection and exhibition of the rubbish generated through my practice is that it’s the objects and materials of failure; the failure to find a use; the negative in a polarisation of use and disuse. 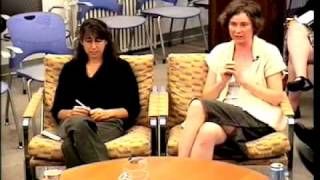 Extract on the semantics of waste:

Ariane Conrad: Would you care to reflect on the semantic shift that occurred: it seems like it went from “garbage” and “trash” to “waste.” With your use of the word “garbage” in your title; are you taking a stand against use of the word “waste”?

Heather Rogers: I use the word “garbage” in the title because I think it’s really recognizable to people. I think that’s what most people call their waste or their discards. That’s why I use it; it’s not a statement of my political or ideological stance on the issue of discards. A lot of people feel very strongly about choosing the right word, and I really respect where that comes from. I think that what we call the things we throw away is very important and it does relate to the way that what we throw out is constructed as dirty and not okay to touch or to consider as having value or being a resource.

In the waste industry, especially the corporate waste industry, there’s been a conscious deployment of specific words to describe what gets thrown away. Often they’ll call it the “waste stream”—they always try to sanitize it. They want discards to be off-limits, but also they want what they do to be perceived as environmentally innocuous. So they call all of the trash that they get from households and cities “municipal solid waste.” They try and transform it into a technical problem, which blankets over the tougher questions about why are we throwing away so much stuff, and what’s in there? Why are there so many resources getting crushed into the ground, or getting burned in the incinerator? Why are we wasting so much? The semantics are a really big part of how the system works and manages public perceptions of it.

In the acknowledgements for her book Gone Tomorrow: The Hidden Life of Garbage, Heather Rogers acknowledges Professor David Harvey, Marxist social theorist and Distinguished Professor of Anthropology at the Graduate Center of the City University of New York, “who let me sit in on many of his classes while I was writing this book. His superb discussion of political economy deeply informs my analysis.”

Here is a great little RSA Animate based on one of his lectures at RSA in April 2010: David Harvey – The Crises of Capitalism

In this RSA Animate, renowned academic David Harvey asks if it is time to look beyond capitalism towards a new social order that would allow us to live within a system that really could be responsible, just, and humane?

I saw David Harvey speak about Marxist theory at Liverpool Biennial with Alfredo Jaar and What, How & for Whom (WHW) as part of The Marx Lounge in conversation series of talks. http://liverpoolbiennial.co.uk/programmes/festival…

A very compelling speaker and key thinker in political theory, I can see how useful his lectures will have been for Rogers as she identifies from the outset how rubbish is politicised and intrinsically linked to capitalism. 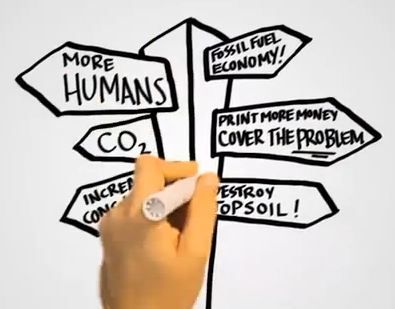 Heather Rogers’ book Gone Tomorrow: The Hidden Life of Garbage follows up and expands on the short film of the same title she made in 2005:

Synposis: This is a short 19-minute documentary about recycling and waste in the U.S. Base on the book of the same name by Heather Rogers. The film has great facts and funny archive, it exposes the often magical (but false) feeling we get from ‘helping the earth’ by ‘recycling’ It also points out the real problems, over production and industrial pollution. Plus it explains corporate greenwashing and our economic system of ‘built-in obsolescence’.

Gone Tomorrow takes us on an oddly fascinating tour through the underworld of garbage and brings meaning to all that gets discarded. Part exposé, part social commentary, Gone Tomorrow traces the connection between modern industrial production, consumer culture, and our disposable lifestyle.

p.3 Garbage is the text in which abundance is overwritten by decay and filth. Rubbish is also a border separating the clean and useful from the unclean and dangerous. And trash is the visible interface between everyday life and the deep, often abstract terrors of ecological crisis.

Chapter 1: The Waste Stream takes the reader through the waste process beginning with the collection:

p.12 Since collection is the most expensive part of the refuse treatment process, condensing the stuff makes for more efficient use of valuable hauling space, but also means that potentially reusable objects are often immediately destroyed and rendered unsalvageable.

p.26 The more efficient, the more “environmentally responsible” the [waste treatment] operation, the more the repressed question pushes to the surface: What if we didn’t have so much trash to get rid of?

Chapter 2: Rubbish Past outlines the 18th/19th Century history of waste when manufactured goods were expensive and hard to come by. The majority of waste was organic matter that was used for agricultural fertiliser collected from cities and sold to farmers.

p.31 Garbage as we know it is a relatively new invention predicated on the monumental technological and social changes wrought by industrialization.

p.32 It was the treatment of dung and feces that the first systematic refuse collection developed.

p.34 So valuable had excrement become [in the 19th Century] that one Brooklyn, New York, farmer stipulated in his will that his son should inherit “all manure on the farm at the time of my decease.”

p.34 As the 19th Century wore on, all variety of rejectamenta, including human feces, known among professionals as “night soil” became commodities to be bought and sold.

On the industrialisation of New York:

p.50 These new wage-earning city dwellers [in 1900s New York] were more likely to purchase – rather than produce their own – milk, bread, clothing and other staples of daily life. Due to long hours on the job, industrial labourers had less time for repairing and rendering what would otherwise be “waste” … Such changes meant more garbage. Industry developed, consumerism began, and so too did modern waste.

Defining New York rubbish at the turn of the 20th Century:

p.56 In 1910 pioneer sanitarian William F. Morse wrote: “The household is required to have three receptacles, for garbage, ashes and rubbish.” At the time “garbage” was often defined as “vegetable matter and table waste” and “ashes” could include “floor sweepings, broken glass, discarded kitchen waste, tin cans and worn-out furniture” and “rubbish” usually referred to “paper, card-board, shoes and rubbers.” 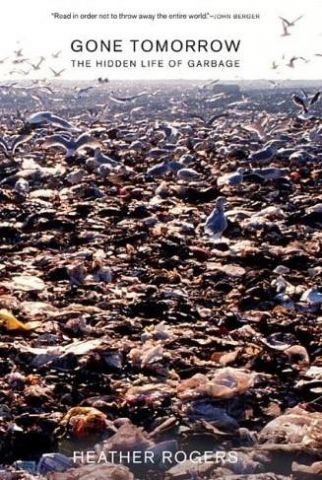