Kate Cowcher reviews Superflex’s film Flooded McDonald’s. “Certianly waste-generating, waist-expanding global corporations such as McDonald’s share in the blame for climate chaos but Superflex’s film is no place for smug moralising. The line between beautiful and grotesque, funny and frightening, hero and villain, is perilously porous and yet complacency is not an option.”

Ben Rivers on Tuvalu where he visited to shoot footage for his video Slow Action (2010): “I don’t think there is much in the country: a bunch of semi-submerged islands, some leftover second world war machinery, and a society that can’t afford to get rid of its rubbish, and so the detritus floats around the feet of the houses (no help from Britain who tossed it aside after being its colonial usurper).”

Chapter One is a feature of Mexican artist Martin Soto Climent by Dominic Paterson. The cover image of this issue is Soto Climent’s Impulsive Chorus (2009). “Empty beer cans are arranged in a cosy circle, their open ‘mouths’ inevitably bringing to mind the communal singing which their contents might have fuelled. […] Cans, bottles, cutlery, boxes, purses, bags, wigs, underwear, tights, shoes: the things which Soto Climent is attracted tend to be objects of consumption, it4sm of clothing or accessories. Perhaps, most significantly, these objects all lead back to the body, as proxies or as metonymic figures.”

A feature on GI Festival mentions Christoph Büchel’s LAST MAN OUT TURN OFF LIGHTS at Tramway: “Inside the maw of this huge industrial space, shipping containers have been converted into jail cells, the main hall is filled with the exoskeleton of a crashed jet with bunt out seats. A rank buring smell fills the space. It’s a terrifying reconstruction of sorts, and produces an omnipresent sense of dread.”

Back in May, Axisweb announced they were having a clear out of their books and publications in their Leeds office, inviting their membership to get in touch if they wanted anything as they were going digital. This was just before Holmfirth Arts Festival where Vanessa Haley and I were curating the Towser Bothy which featured an artists’ book and zine library and a dry stone wall bar. I got to Leeds as quickly as possible. Amongst the haul of artists’ books and zines which went into the Library were several back issues of MAP Magazine. They’ve been sat in my studio waiting to be read for months, and finally I got round to taking a look with a specific research intent.

Here are my rubbish findings in the rejected magazines (part 1):

A review of Tomoko Takahashi’s exhibition My Playstation at the Serpentine Gallery, London, 22 February – 10 April 2005, by Donald Hutera: This exhibition by the 2002 Turner Prize shortlistee “comprised around 7600 objects collected, donated or found over a period of months, which Takahashi painstakingly sorted and arranged throughout the Serpentine […] The waste and decadence underpinning Takahashi’s show were redeemed on the final day via a beautifully-managed take-away, in which the public was invited to come and cart off the gallery’s contents.”

In the Graduates 2005 section under Aberdeen, David MacRaild’s sculpture Need Not Want Not gets a mention: “A collection of detritus from around his studio has been encased in a one-mtere cube of translucent resin and placed on a wooden pallet.”

MacLean is self-described as ‘a domestic archaeologist’ and ‘a wallpaper pirate’. “I started collecting wallpaper from derelict houses more than a decade ago.”

The Recycling the Ruins feature on French artist Cyprien Gaillard looks at his first exhibition in a British institution; the Glasgow 2014 project at the Hayward, London. “When Tom Morton, curator of the project, invited me to show in this space [Hayward’s project space], I decided to make one of these monuments I’ve been wanting to make for a long time, using recycled concrete from a demolished tower block up in Glasgow. We shipped about 30 tons of concrete from a demolished tower block to London and I assembled this rubble into the shape of an obelisk. It’s called ‘Cenotaph to 12 Riverford Road, Pollokshaws, Glasgow’, which is the name of the building demolished this summer.”

From wikipedia: Keywords: A Vocabulary of Culture and Society is a book by the Welsh Marxist academic Raymond Williams published in 1976 by Croom Helm, with a revised and expanded edition published by Fontana in 1983.

Originally intended to be published along with the author’s 1958 work Culture and Society, this work examines the history of more than a hundred words that are familiar and yet confusing: Art; Bureaucracy; Culture; Educated; Management; Masses; Nature; Originality; Radical; Society; Welfare; Work; and many others.

The approach is cultural rather than etymological. Sometimes the origins of a word cast light on its meaning, but often one finds that it originally meant something quite different. Or that there has been a fierce political struggle over the ‘correct’ meaning.

Williams introduces Keywords as “an inquiry into a vocabulary: a shared body of words and meanings in our most general discussions, in English, of the practices and institutions which we group as culture and society. (p.15)

In defining the selected words, especially those which involve ideas and values, is not only impossible, Williams declares, but an irrelevant procedure. He asserts that it is the range of meanings, and values that matters. (p.17)

“Keywords is based on several areas of specialist knowledge but its purpose is to bring these, in the examples selected, into general knowledge, meanings and contexts.”

The intrinsic nature of the book is to emphasize the interconnections.

“It is true that no word ever finally stands on its own, since it is always an element in the social process of language, and its uses depend on complex and (though variably) systematic properties of language itself.” (p.22) 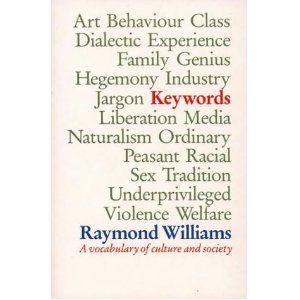 “Arte Povera literally translated means ‘poor art’ but does not refer solely to the poorness of materials.2 (p.16)

Whilst Arte Povera may have set a precedent for the kinds of approaches of some artists working with rubbish today, only a few Arte Povera artists used waste and discards directly in their work, notably Michelangelo Pistoletto, and Piero Manzoni if he is to be included in the movement. Others did employ everyday/readymade materials such as Pino Pascali’s use of acrylic and steel wool in Vedova Blu [Blue Widow] (1968) and Alighiero Boetti’s use of cardboard pastry bases in Colonne [Columns] (1968) but materials were more commonly ubiquitous, industrial and cheap, or sometimes traditional sculptural materials in order to comment on those traditions.

“The term ‘Arte Povera’ initially referred not to the use of ‘poor’ materials, nor to a sociological critique of consumer society, but to the concept of ‘impoverishing’ each person’s experience of the world; this implies gradually freeing one’s consciousness from layers of ideological and theoretical preconceptions as well as from the norms and rules of the language of representation and fiction.” (p.22)

“It was Arte Povera’s affirmation of the vital importance of subjectivity in the process of experiencing the world that ushered in an art that, if not directly anthropomorphic, was clearly about the body and its experience; but because the focus was on real life and not artificial representation, the work had to be decentred from the figurative or presentational bodily reference. The result was that it often referred to the places we make for our bodies.” (p.46)

Arte Povera drew attention to process and to the historical and cultural significance of signs, attitudes ans objects.

“The first version of this work [1967] was a mica and cement reproduction of the classical Callipigia Venus facing a heap of rags of various colours, which had been used by Pistoletto to clean his mirror paintings. Two further versions Venere degli stracci and Venere degli stracci dorata [Golden Venus of the Rags] 1967-71 were created from a plaster cast of the original. He later made others in marble and, in 1982, in polyurethane covered in fibreglass.”

In an unpublished artist’s statement in 1977, Pistoletto instructed: “In the various existing versions of the Venus, or the re-installation, you can use the same original rags or you can change them, but they must maintain their multi-coloured and ruffled character. One of the plaster Venuses of 1967 was broken. My project is to put the pieces together leaving the signs of breakage evident, like the tears in the rags.”

The Most Difficult Thing Ever

Kevin Boniface regularly deals with the everyday in his drawings, writing, books and videos, so it is inevitable that rubbish surfaces occasionally. In his award winning blog The Most Difficult Thing Ever, Kevin combines short videos with text narrative from his mail rounds as a postal worker in Huddersfield.

Surrounded by over-flowing wheelie bins, a collapsed stack of breeze-blocks, a roll of sodden carpet, an empty hanging basket, a discarded moulded fairy-garden water-feature with a crack in it and an unruly jasmine litter trap – energy drinks cans, a plastic elbow pipe fitting and an empty children’s bubble mixture bottle – the door was opened by “Beautiful Sajida”.

Kevin also has a Found Notes section on his website which features note he has found http://victorygarden.co.uk/VG/Found_Notes.html 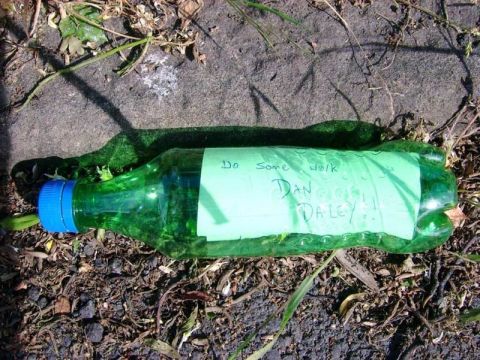