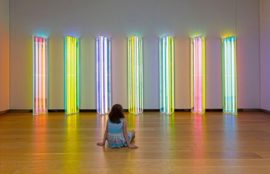 Shouldn’t Throw Stones – The view of a Night Watchman is an exhibition, tour and book publication documenting artist Kevin Casey’s role as a Night Watchman at the Ex Pilkington Glass HQ in St Helens.

I have received funding from the Arts Council for a Magna Carta art project which will be touring England next year. The four-piece collage highlights the key women & men that have had an impact on British women over the last 800 years & commemorates the 800th year anniversary.