During the first a-n Writer Development Programme workshop at Coventry Artspace in November, Coventry Biennial director Ryan Hughes kindly agreed to be interviewed by the eight writers on the programme. Hughes also gave us a tour of two of the festival’s key venues – The Row and Herbert Museum and Art Gallery.

As a follow-on task, the programme participants were asked to write a 1,000-word feature on the biennial. Each of the finished pieces will be published on this blog – the second of the articles is by Brighton-based writer Kitty Bew. 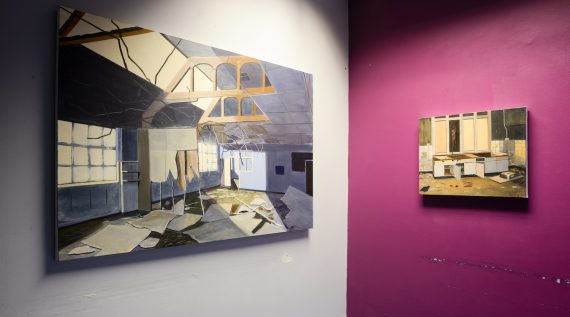 “A politically and socially-loaded setting.” Ryan Hughes – artist, curator and founding director of Coventry Biennial – is well aware of the ideological burden of exhibiting in an abandoned NHS facility. The Row, a former rehab centre in the heart of the city, is one of the primary venues for the 2019 biennial, the second iteration of the festival that was first staged in 2017. Dubbed ‘The Twin’, it centres on the city’s role as a pioneer of the twin-city movement. During the second world war, Coventry was paired with Stalingrad – now Volvograd – as a symbol of intercontinental support and collaboration. Seventy-five years later, it is now twinned with another 25 cities across the world. The concept of opening doors to cultural difference is embedded in Coventry’s history; it’s no surprise then that the biennial’s core programme is marked by themes of international togetherness, relationships and dualities.

This social setting is no more apparent than at The Row. While other venues include the Herbert Art Gallery and Museum, Arcadia Art Gallery and Coventry Cathedral, this repurposed building stands out as an embodiment of the biennial’s “political thread” that Hughes so enthusiastically describes as running through “everything we’re doing and trying to do”. When asked about the role of politics in his curation of the festival, Hughes acknowledges the importance of creating an environment for open and honest conversation between artists and visitors. In many ways, The Row offers the chance to broach the most critical subjects of the UK’s current political conscience. The National Health Service is inseparable from British politics. From its founding in 1948, to its current under-funded self, its existence is as vital and as controversial as ever. The politics of health was apparent in the months leading up to the EU Referendum, and even more so in the liminal three years since. It has also proved to be a hot topic in this year’s general election.

The biennial exhibition is the first substantial public use of The Row since it was deserted two years ago. Hughes and his team have left it as it was: “an NHS clinic that has been abandoned.” Touring the three-floored building is an uncanny experience. Lino floors, panelled ceilings and duck-egg blue walls are obvious vestiges of its institutional past. Its multiform rooms are suffused with a universal sadness that is hard to shake, much like the scent of disinfectant that hangs in the air. The building is missing its clinical fixtures, its gurneys and rows of plastic chairs, the scuffs and stains on the wall are its only keepsake. 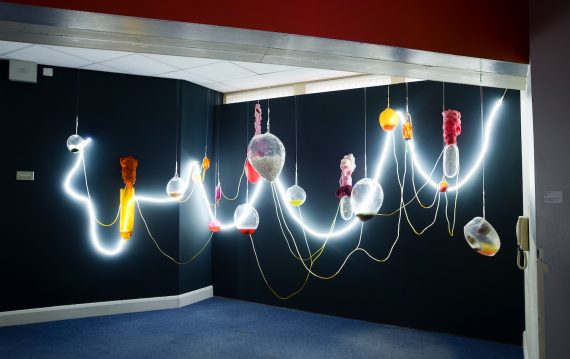 Sprawled across The Row’s three floors is a variety of work from 58 artists and artist-duos that dare to play with the makeup of the building. One piece is especially fitting. Matt Gale’s Soma (2019) is a playful and grotesque exploration of the idea of the body as ecosystem; delicate and dependent. A collection of bloated and vibrantly coloured gourd-like vessels are strung together, connected by threads of electric light that kindle one, and then another. Some are filled with fluid, others with an organic substance; soil, moss and budding plants. Inseparable from its surroundings, their fragility also brings to mind the infirm state of our own collective health service – Britain at death’s door.

A series of small paintings from local artist James Birkin detail dilapidated, urban interiors. He explores the dereliction of town centres, presenting us with the dismal reality of parts of the Midlands such as Coventry, where empty high-street shops are commonplace. Undoubtedly his work resonates with its exhibition space. One painting Untitled (2018) depicts a small kitchenette with cupboard doors dangling from their hinges, dreary white tiles, and a floor scattered with debris. For visitors it might bring to mind their immediate surroundings; a not dissimilar room lies just next door, bearing yellowing tiles and a kitchen sink. His work represents an engagement with an especially contemporary English landscape. For the Biennial’s audience, it is a landscape that can be seen and understood by exploring the area surrounding The Row, an area that has far from blossomed under 10 years of austerity, with much of it lying empty. A sense of abandonment saturates the exhibition space, the city, and is echoed in the work of artists such as Birkin.

A feeling of having been ‘left behind’ by a southern elite, was thought to have been a motive for Leave-voters in Britain’s northern and Midlands towns in the 2016 referendum. As Hughes points out, Coventry voted to leave the European Union – the West Midlands were in fact the heartland of the Brexit vote, where 29 out of its 30 council areas voted in support of Leave. ‘The Twin’ brings to the fore Coventry’s heritage of international twinning, a concept with ties to diversity, collaboration and open arms, that runs counter to a vote for Leave. The Biennial has certainly done much to create what Hughes calls a “rich environment” for open conversation. It’s appropriate then that ‘The Twin’ is being articulated as the UK’s Social Biennial, one that aims to engage directly and sincerely with the city’s local community. Perhaps a social focus is all the more important at a time of nationwide disillusionment with our current socio-political condition. As Hughes puts it, the Biennial felt a responsibility, and a potential, to probe “this contemporary moment”.