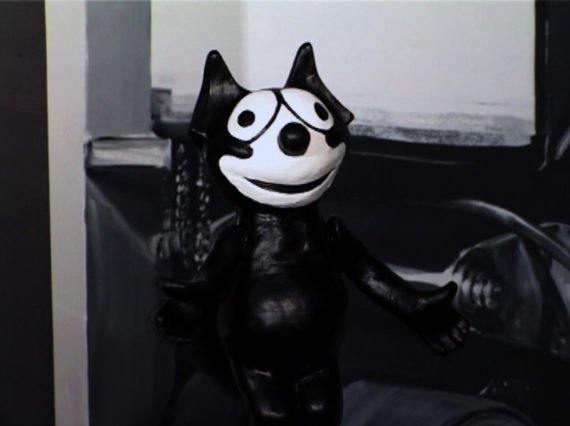 Ghosts in the Machine: Mark Leckey’s Felix Gets Broadcasted (2007)

In flickering monochrome on an old tube TV, a figurine of Felix the Cat rotates on a platter. His smiley blankness seems to gradually turn to dread, his eyes peeled back like Malcolm McDowell’s in A Clockwork Orange. There’s an undercurrent of interrogation as he spins in the spotlight; the sound of churning equipment, a threatening electric crackle. A rotating daisy wheel chops through the lights like a cartoon buzz-saw, while the analogue image appears to split into its constituent vertical lines, like a set of blinds drawn apart. Circular dissolve. Fade to black. That’s all folks!

Fragmenting throughout the video, Felix looks like he’s about to test-run Star Trek’s matter transporter, and in a way he is: a 13-inch papier-mâché figure of Felix the Cat was the first image broadcast on television, with RCA’s experimental transmissions beginning in 1928. Felix patiently sat out the best part of a decade on his record-player turntable as the TV pioneers tweaked and tested away.

This setup was restaged almost 80 years later in the studio of Mark Leckey for the 2007 work, Felix Gets Broadcasted.  The artist, who was born in 1964, is a compulsive archeologist of pop culture and a self-confessed wallower in the ‘mire of nostalgia’. In his hands, the image of Felix being conjured, captured and beamed through the vintage TV apparatus becomes part materialization – as if invoking a spirit or a demon –  part execution. It reflects Leckey’s Dr Frankenstein-like preoccupation with animating and reanimating the remains of 20th century culture; the gap between materiality and immateriality and the way in which a 2D image of a 3D model of a 2D character can be imbued with a sense of life. There’s a gleeful wilfulness to Felix Gets Broadcasted. You half expect Leckey to scream, ‘It’s alive!’.

Leckey’s obsession with the veneer of appearance is grounded in his early life, stranded just far-enough across the Mersey from the city lights of Liverpool in the overspill town of Ellesmere Port, where he cottoned on to the then-current ‘casual’ subculture: young working-class men dressed in the expensive leisurewear of the jet set. “It was a kind of drag, a disguise,” he recalled, “a means of using style to transform yourself.” Leckey became a believer in the power of image, even if that image has no real substance. On first meeting, New York gallerist Gavin Brown remembered: “He was all talk. He hadn’t made anything. But I’ll never forget the way he dressed, the way he walked. I wanted to be around to watch it.”

In mixing trashiness and perfectionism, the tangibility of the recognizable and the potency of the popular, Leckey’s a little like Jeff Koons – if Koons had grown up on the Wirral. He’s an admirer of the older artist in any case. A 2004 piece, Made in ’Eaven, green-screens Koons’s shiny balloon Bunny into Leckey’s empty London studio. “I like the idea of something that’s almost inhuman in its perfection,” he explained, “like Bunny, it’s as if it just appeared in the world, as if Koons just imagined it and it appeared.” Both artists exploit the impenetrability and strength, the inevitability even, of the cartoon image. Felix the Cat is a robust, appealing aesthetic form, but also an everyman, a clean slate to project whatever ideas we might wish upon; as monolithic as cartoon characters can be they are also fluid, available, becoming whatever we need them to be.

It’s not surprising Leckey employs Felix as something of a personal avatar, the slippery cat appearing in several of his works over the years. For Italo Calvino, the image of Felix walking down a moonlit path was an emblem of simplicity, mercurial quickness and lightness of touch; in the 1923 short Felix in Hollywood, the cat shape-shifts into a bag, using his tail for a handle before detaching it to mimic Charlie Chaplin’s cane. By Leckey’s sleight of hand, Felix takes Chaplin’s place altogether, the frightened cat dazed by the spinning lights a reincarnation of ‘the little tramp’ draped over the factory cogs in Chaplin’s 1936 film Modern Times. A ghost trapped in the machine. 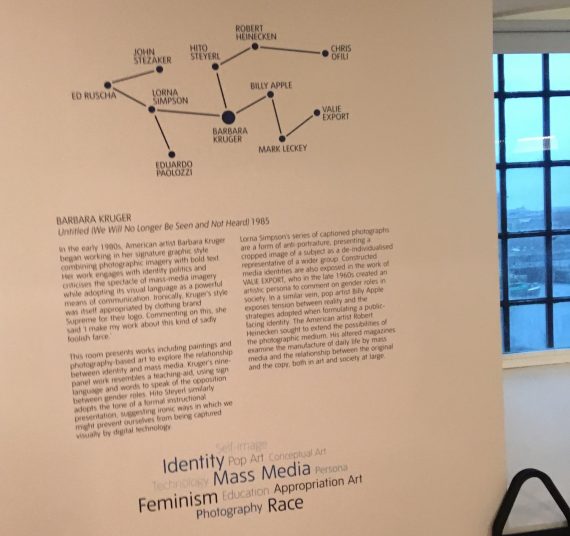 The third and final workshop of the a-n Writer Development Programme 2019-20 took place on Friday 21 February at Tate Liverpool.

Hosted by Liverpool-based writers/editors and co-founders of The Double Negative website Laura Robertson and Mike Pinnington, the afternoon was a lively combination of informative chat, discussion and writing exercises.

Drawing on Laura and Mike’s experience of different aspects of art writing from the journalistic to experimental, this workshop also took a closer look at the role of interpretation and specifically gallery wall texts.

After introductions and the sharing of publishing industry tips gleaned from their experience with The Double Negative and working freelance, we visited Tate’s ‘Constellations’ exhibition for some live writing exercises.

‘Constellations’ draws on Tate’s collection and explores ‘the links between artists and artworks’ through six groupings of different works. We focused on the Barbara Kruger constellation which includes pieces by 11 artists including Lorna Simpson, John Stezaker and Chris Ofili.

The writers were challenged to write short texts in a variety of styles, responding to a work of their choice. This was followed by a closer look at Tate’s own accompanying interpretation before we returned to the workshop room for more writing and discussion.

The task following this workshop is to write a 600-word profile piece on a ‘Constellations’ artwork, building on the 100-word Tate wall text and including quotes. All the articles will be published on this blog.

In the last of the 600-word reviews filed following the second workshop at Baltic in Gateshead, Isaac Nugent looks at London-based painter Joy Labinjo’s recent exhibition. 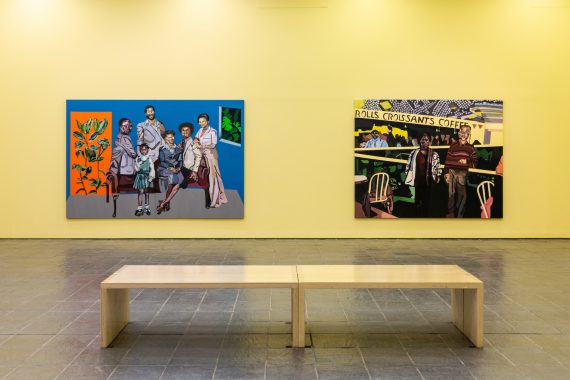 Through a series of large, brightly-hued paintings and sketchy drawings on a more intimate scale, British-Nigerian painter Joy Labinjo attempts to make visible the private lives of communities often under-represented in cultural spaces. In her exhibition, ‘Our histories cling to us’, she depicts black families engaged in the rituals of everyday life: weddings, family parties, time spent with friends and relatives. Yet while she proposes these experiences to be important markers of cultural identity for Britons of Nigerian descent, the works themselves seem lightweight and insubstantial. A recent graduate from Newcastle University and winner of the 2017 Woon Foundation Prize, at 26 is she really ready for her first solo show at a major gallery?

Clearly informed by photography, Labinjo’s work is suffused with nostalgia yet seems to be lacking in warmth. Eyes deadened by the flash of the camera that originally caught their awkward poses and smiling faces, her subjects – black men, women and children at every stage of life – look out towards us, or even beyond us, momentarily frozen. Changing fashions act as markers in time, prompting the viewer to speculate when the photographs that inform the paintings were taken. The men and women of The Final Portrait, for instance, sport baggy battleship-grey suits and shirts with wide collars, dating them to the 1970s or 1980s, while the child depicted in Everything will be alright (2019) wears a loud sweater patterned with scarlet and blue-grey rectangles and must belong to the 1990s. Labinjo’s attention to what her sitters are wearing makes for a sentimental view of history. Rather than gaining a fresh perspective on the recent past, the viewer simply recalls with bemusement the unusual fashion choices of the period. Her focus on pattern and colour makes for paintings and drawings that are superficially charming, perhaps, but little beyond decorative. 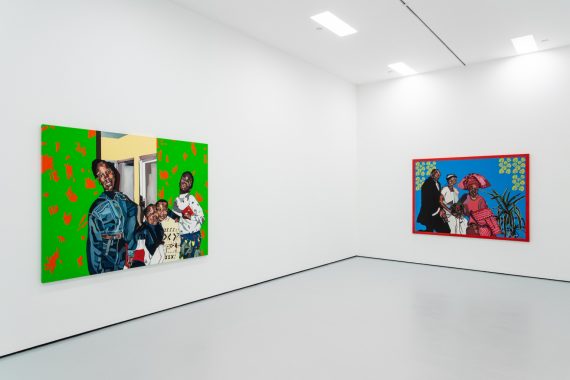 Labinjo paints in such a dispassionate manner that these people could be members of the same family: images from a single photograph album. Like feted American portraitist Jordan Casteel, with whom her approach has some affinity, Labinjo wrestles with her photographic source material, attempting to find a means of deviating from the certainty that photographs provide. However, unlike Casteel, who has exhibited an increasingly sensitive touch as her work has matured, Labinjo’s work fails to generate the intimacy that she presumably intends. Her attempts at abstraction feel forced. Each face is distorted according to the same formula: fractured into a patchwork of tones with no translucency or loose brushwork whatsoever. Oil paint, which Labinjo favours, is a versatile medium, but she permits herself only opaque and clearly delineated blocks of colour. For her backgrounds, Labinjo generally chooses zany blues, electric oranges and shocking pinks, editing out peripheral information from the photograph that she’s working from. She intends to focus the viewer’s attention on the figure, but this decision generates a sterile atmosphere. In several of her paintings, Labinjo attempts to alleviate this through the addition of houseplants or floral patterns. Acting as shorthand for the domestic settings that she’s excised, these motifs are prompted by the still life paintings of Lucian Freud or Matisse by way of popular Los Angeles-based painter Jonas Wood. In short, their addition is hardly an original move.

The need to redress the absence of people of colour as subjects in figurative painting is rightly receiving significant attention from museum curators both in the US and UK. Yet although working with the black figure as its primary subject, Labinjo’s work is of far less consequence than the paintings of, say, Lynette Yiadom-Boakye or Njideka Akunyili Crosby. Saccharine, generic and monotonous, there is little here to suggest that this young artist is ready for the platform she has been given.