Following the first workshop in the a-n Writer Development Programme 2019-20, which took place at Coventry Artspace in November, the writers were tasked with writing a 1,000-word article on the Coventry Biennial.

The brief asked for direct quotes from biennial director Ryan Hughes (who kindly agreed to be interviewed during the workshop), as well as description and comment about the 2019 biennial. 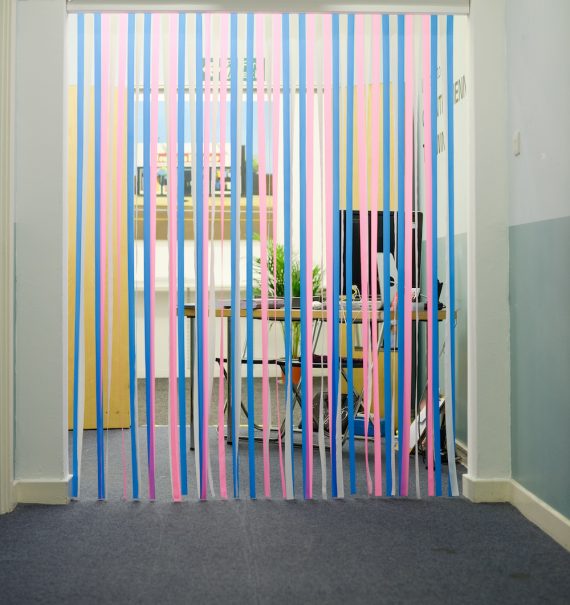 “I think the problem is that visual art, especially contemporary art, is seen as the difficult one of the arts… hard to engage with… elitist…” Ryan Hughes, artist and founding director of the Coventry Biennial, is sitting cross-legged on a plastic chair, drinking from a litre carton of orange juice. “But,” he continues, “we’re working very hard to alleviate some of that tension, and to try to make the art world more accessible.”

Hughes is speaking during the final days of the seven-week-long biennial, which has hosted over 800 individual works by 106 artists across 21 venues. As the only full-time member of staff he has curated everything, with the help of a very small team. If he feels tired, he doesn’t show it. In fact he’s already looking forward to the next one.

Hughes started Coventry Biennial in 2017 as an artist-led response to Coventry’s successful bid to become the UK City of Culture. At that point the city’s strategy focussed on dance, theatre and performance, with little mention of contemporary art. Hughes looks wry: “I saw an opportunity to be bold and ambitious and to play nicely with others.” That first biennial helped to make the city’s bid successful; now, contemporary art’s role is assured during Coventry’s 2021 celebrations.

The 2019 biennial is themed around the idea of ‘The Twin’, in recognition of the 75th anniversary of the start of the city twinning movement, which began when Coventry was twinned with Stalingrad (renamed Volgograd) in 1944. Coventry now has 26 twins in total, including Dresden in Germany, Parkes in Australia, and Jinan in China. Hughes invited artists from all 26 to become part of the biennial, then opened it up to artists in and around the city, including those who were newly graduated. At this point the theme expanded to include work exploring identity, recognition, fake news, binaries, doppelgangers, and relationships of every kind. “It was at that point,” says Hughes, “that we felt the exhibition had some sort of potential to probe this contemporary moment, which feels deeply problematic in a lot of ways.”

The two main exhibitions — one at the Herbert Museum and Art Gallery and one at a disused NHS rehabilitation facility renamed The Row — are twins in themselves, with several pieces of work shown in both. For example, at the threshold to the Herbert show, the pink, blue and white ribbons of Dylan Fox’s Strip Curtain (2018) feels celebratory and optimistic in its exploration of gender transition. At The Row – where the NHS fixtures and fittings remain largely intact – the same work takes on a deeper emotional resonance, its bright colours an uneasy contrast to the chipped paint and scuffed walls of the building’s unloved interior.

The biennial shows that anywhere can be a gallery. In the toilets at The Row, positioned exactly above the sink, is Ewan Johnston’s 2019 painting, Prehistoric Hangover, in which a bare-chested man contemplates his reflected self with a deer’s head. A darkened consultation room showing Georgiou and Tolley’s 2019 video work, Twin Stranger: Entangled State plays with reflections within images of a cold war-era hotel foyer. The voiceover makes ever-more incredible connections in an ongoing monotone of paranoia and conspiracy. Who is real? Who is an agent? Who is the mystery boy in the photo? 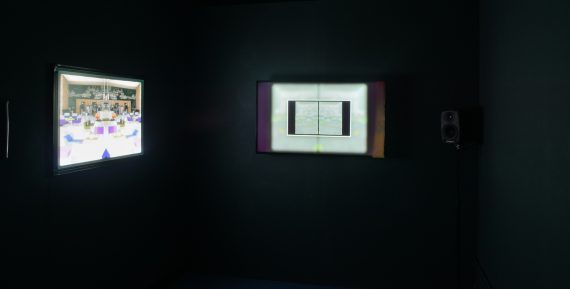 There is so much more to see and experience: an exhibition at the medieval Weaver’s House that relates textile works in Polish industry to the domestic setting of Muslim homes; Potluck Lunches at vegan café The Pod; artist-led yoga at The Herbert. Just to see all the exhibitions in the biennial would, Hughes calculates, take four days. Has contemporary art been made more accessible, the “elitist” tag challenged? Hughes would like to think so. He explains that, rather than just expect locals to come to the biennial, the biennial has gone out to them, working with many different communities across the city. “We don’t have to tell them to come to the shows, because they’re already in it,” he says. “Or if they’re not, then their dads or friends are.”

These community initiatives included work at STEPS for Change, a city centre drop-in service for rough sleepers, where works created from donated socks, t-shirts and cardboard were exhibited in a new gallery space. Developed in partnership with the homeless charity Crisis, the space itself is controlled by the rough sleepers who use the facility.

The biennial has addressed accessibility in other ways, too. Hughes and his team were keen to “discard the baggage” of the less helpful elements of biennial culture, such as the invisibility of local artists at many of these international events. “We see huge numbers of biennials not showing any work by artists from their own location and that disgusts me,” says Hughes. Instead, Coventry Biennial has a 50/50 split between local and national/international artists. And while there are some big names in the lineup, the emerging and lesser-known artists are presented on an equal footing.

Crucially, when the biennial is closed, new visual arts infrastructure remains. In 2017 that saw the former Coventry Evening Telegraph (CET) building become a temporary gallery and studio space, hosting 33 further exhibitions. There was, as Hughes puts it, “an outpouring of creative excitement because there was somewhere to make and show work”. This year the team is hopeful that The Row will remain in artists’ hands, providing gallery spaces and artists’ studios in the heart of the city. Meanwhile, the work continues across Coventry’s many communities. “We’re hyper aware of making work when we’re not making work,” smiles Hughes.

And so it is that Coventry, the city that both started the twinning movement in 1944 and voted Leave in 2016, has been placed at the heart of this biennial. This self-declared ‘Social Biennial’ has social engagement at its heart: “No progress without others” as it declares in the New No’s, a manifesto by Paul Chan and Badlands Unlimited at the entrance to The Row. Hughes and his team have set up the connections and infrastructure to make the 2021 Biennial during Coventry’s tenure as UK City of Culture an exciting prospect. “It could have gone horribly wrong,” admits Hughes modestly. “But I’m quite pleased with it.”