Continuing our series of articles on Coventry Biennial, stemming from the first workshop at Coventry Artspace which saw the biennial’s founding director Ryan Hughes interviewed by the programme participants, here’s Joanna Byrne’s profile. 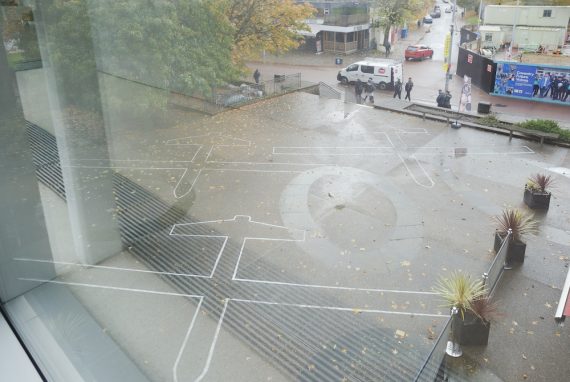 The UK’s newest biennial of contemporary art may yet be its most radical. Founded in 2017, the second edition of the Coventry Biennial features over 800 artworks by 106 artists in 21 venues across Coventry and the West Midlands. Billed as the UK’s first ‘social biennial’, the programme invites audiences to “make, learn, look, eat, think, walk and talk… with us”. For founder and director Ryan Hughes, the “us” here means not just the artists, or the biennial team, but Coventry itself.

Bringing people together is something the city has experience in; Coventry kickstarted the international twin city movement in 1944 through its partnership with Stalingrad (now Volgograd), after much of the city was destroyed during the Blitz. 75 years later, Coventry is a serial twin, connected to 26 cities and towns worldwide. This rich history is reflected in the 2019 theme of ‘The Twin’. Hughes wanted the biennial to represent the “diversity and energy that the twin city movement ignited in the city” and forge new relationships between artists and audiences.

At the heart of the biennial are two core exhibitions, both of which engage conceptually and creatively with this year’s theme. Based at the Herbert Art Gallery and Museum and The Row, a former NHS facility, the venues sit either side of Coventry’s unique, ‘twinned’ cathedral of St Michael’s, a wonderful hybrid of gothic medieval ruin and Sir Basil Spence’s visionary, monumental modernism. Rising up defiantly from the concrete of the city’s central plaza, the cathedral’s otherworldly forms are emblematic of the collective trauma enacted by the second world war, and a postwar British socialist architecture of hope.

Politics is relevant here, as are the shadows cast by the 20th century. Coventry, like many other places in Britain at this current moment, is replete with complexities and contradictions. Despite founding the idea of international friendship in the modern era and welcoming many migrant peoples into the city, Coventry voted Leave in the EU Referendum. Hughes says this backdrop created a “rich environment to have open and honest conversations” with artists and visitors.

Some of these conversations concerned the arts in the city, particularly in relation to Coventry’s bid for UK City of Culture 2021. Visual art, and particularly contemporary art, has often been seen as “difficult, elitist… or hard to engage with,” notes Hughes. Although the arts (theatre, dance, music) were well catered for in the 2021 bid, visual arts were lacking. Hughes saw this gap as “an opportunity to be bold and ambitious,” the result of which was the inaugural Coventry Biennial in 2017. This year builds on the pilot’s success with a diverse programme of exhibitions, projects and events.

Hughes does admit, however, that there were some “quite deep problems” around expectations of “what biennials do and how they do it… We see a huge number of biennials not showing any artists from their location. That just disgusts me, so that had to go immediately”. In the final cut, artists from Coventry and the West Midlands were represented equally with national and international artists.

There is a diverse range of work on show, and much of it feels haunted by the presence of human bodies. Outside the Herbert, James Bridle’s Drone Shadow (2013/2019) depicts outlines of unmanned drones – invisible to radar – chalked directly onto the pavement. Inside is Dylan Fox’s multicoloured Strip Curtain (2018), a permeable barrier that flutters around visitors as they pass into the exhibition, reminiscent of liminal spaces where public and private lives converge. In Mona Hatoum’s A Couple (Of Swings) (1993) two glass swings are suspended together. If either were set in motion, they would shatter, setting up a performative suspense wrought with dangerous potentiality. Comfort Blanket II (2018) by Natasha Brzezicki provides a soft counterpoint; a hand-stitched patchwork quilt made from found blankets is displayed like a relic, inviting human touch. This quality also emanates from Andrew Jackson’s From a Small Island (2018), a series of understated portraits shot in Kingston, Jamaica. The material qualities of light, grain and texture add a tactile physicality to the photographs. 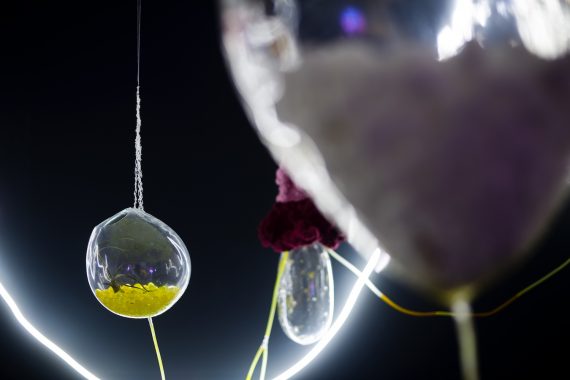 The “politically loaded” setting of The Row, an abandoned NHS addiction rehabilitation facility, makes the second show feel edgier than its twin. Dispensing with the conventional ‘white cube’ gallery format, the institutional, medicalised environment feeds into the work on show.

Entering the exhibition through a second Strip Curtain (2018), we follow strange neon tentacles weaving in and out of the air vents above, into the alien room-scape of Mhairi Vari’s Perpetual Doubt (2015/2019). Here, a once-writhing, now-frozen mess of garish, post-organic lifeforms have ruptured the fragile epidermis of the space’s internal architecture. It’s as though the building’s nervous system has been exposed: garish cybernetic snakes burst through yellowed polystyrene ceiling tiles, roaming across the stained carpet as they search for a way out.

Opposite, divided by the remains of a glass-bricked hospital corridor, is Matt Gale’s Soma (2019). Translucent, womb-like chambers connected via a network of plastic veins, like intravenous drips, hold a variety of coloured liquids, animate and non-animate objects – moss, polystyrene – and living organisms – plants, larvae – that will evolve, and deteriorate over time. It is a sculptural fragmentation of the post-human body, hanging delicately in space.

In Discursive Ability (2019) by Jazz Moreton, voices leak through the tinny speakers of the building’s old public address system. They talk honestly, sometimes painfully, about experiences of disability and communication difficulties. This expands on themes of medicalisation and discrimination found in Fox’s Nobody Passes (2019), located in a former treatment room. These neon words blink on-and-off; fluid, fluctuating in meaning, never one thing or another. The art here is socio-politically charged, reflecting bold curatorial choices.

Looking beyond the biennial’s exhibitions, Hughes is passionate about connecting with and giving back to the local community. Creative participatory projects have engaged local communities – “taking the activity to them” – while a partnership with the homeless charity Crisis and a local drop-in centre established a gallery space; its future use will be decided upon by service users. Hughes adds that “it feels really important to make infrastructural changes to the spaces that we use” in order that the biennial provides a tangible legacy for artists working in the city. Following the redevelopment of the Coventry Evening Telegraph building, the core biennial exhibition space of 2017, Hughes says “there was an outpouring of creative excitement because there was finally somewhere to make and show work”.

You can feel this excitement running through the work on show, and it is palpable in Hughes’s voice as he talks about how hard he and the team worked to pull this ambitious biennial together. “It could have all gone horribly wrong…” he reflects, grinning (and grimacing) at the memories. But already, you can see 2021 is all that Hughes is thinking about.