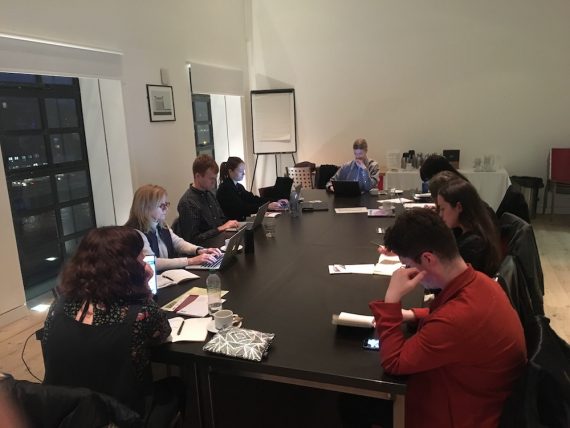 The second of three workshops that form part of the a-n Writer Development Programme 2019-20 took place on Wednesday 15 January at Baltic, Gateshead.

Led by frieze deputy editor Amy Sherlock, the focus of the afternoon was exhibition reviewing for the art press.

Before the workshop, Amy asked each of the eight participants to pick an art review they had read recently and to note what they liked about it, what worked and what, perhaps, didn’t.

On the day, the first couple of hours were spent discussing the texts, which ranged from Peter Schjeldahl on Rothko for the Village Voice to Jeremy Millar reviewing Mike Nelson’s Tate Britain show ‘The Asset Strippers’ in Art Agenda.

After much discussion and good advice from Amy, we spent around 45 minutes visiting the current exhibitions at Baltic: a Judy Chicago retrospective, a solo show from the painter Joy Labinjo, and the group show, ‘Animalesque: Art Across Species and Beings’.

The remainder of the day was spent working on the opening sentences for a 600-word review, followed by more discussion around those difficult first words. The workshop also touched on pacing and structure, as well as the important balance between description, opinion and keeping the reader entertained.

All eight writers will file a completed review of one of the shows, which will be published on this blog in the coming weeks.

Image:
Participants at the second workshop of the a-n Writer Development Programme 2019-20. The workshoptook place at Baltic, Gateshead and was led by Amy Sherlock, deputy editor, frieze. Photo: Chris Sharratt