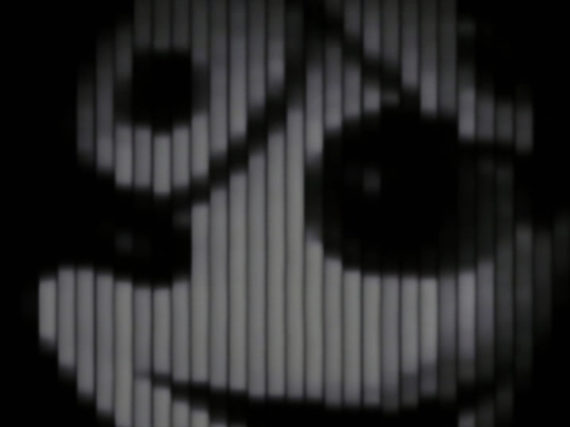 In the blue, flickering half-light, two large oval eyes, a perfectly round nose and upturned crescent smile emerge briefly, before revolving out of view. The scene cuts to a spinning disc, pierced towards the edge by a shuddering bright light and accompanied by the sound of a whirring motor. These two enigmatic short clips form part of Turner Prize-winning artist Mark Leckey’s love letter to Felix the Cat, a cartoon character that became the star of silent cinema, appearing in over 100 animated films before the arrival of the ‘talkies’ in the late 1920s.

Such was the popularity of the amiable grinning cat that electrical engineers chose a papier mâché figurine of Felix to be their test subject for the first experimental television broadcasts in 1928, his signature black and white silhouette providing the strong tonal contrast they needed to fine tune the picture definition. Leckey’s film recreates this significant event through a series of tantalising glimpses behind the scenes. We’re brought inside the studio at W2XBS in Van Cortlandt Park, New York where the broadcasts were made, given a glance at the elaborate light set-up, the spinning camera flywheel and occasionally even the Felix figurine itself, revolving with hands outstretched on a phonograph turntable. Leckey cuts quickly between images, using inconsistent lighting and extreme close-ups to ensure that we never get the complete picture. This lends the mechanics behind the first television broadcast, ostensibly a mundane subject, an air of mystery and intrigue. Felix appears only as a fugitive presence, an apparition haunting the popular imagination.

Felix Gets Broadcasted is just one of several works the artist has made about Felix the Cat. Others include a 33-ft tall inflatable sculpture and an hour-long lecture on the enduring power of obscure popular culture in the internet age. ‘I liked that it was a two-dimensional cartoon that became a three-dimensional doll, that then became this electronic entity that got broadcast out into the ether,’ Leckey explains. The  role of magic and myth in the 20th century, and almost alchemical process through which the symbols of popular culture transition from one medium to another, has fascinated the artist throughout his career. Fiorucci Made Me Hardcore, a 15-minute film that made Leckey’s name when it was shown at the ICA in 1999, charted the development of youth culture between the 1970s and 1990s, whilst Made in ‘Eaven (2004) digitally recreated Jeff Koons’ legendary stainless steel Rabbit (1986), placing this icon of late 20th century sculpture on a pedestal in an empty room within Leckey’s own modest London home.

Consisting only of subtle shifts in context or almost imperceptible transitions from one medium to another, Leckey’s work has sometimes been criticised for being overly slight. ‘Diverting in small doses, on a large scale it is exposed as minor art’, Guardian art critic Jonathan Jones wrote of his Turner Prize exhibition in 2008. Leckey’s supporters argue otherwise. The curator and critic Matthew Higgs believes the ‘strange non-artlike quality’ that Leckey’s work possesses allows him to operate ‘on the knife’s edge where art and life meet’. Felix Gets Broadcasted may have the appearance of a narrative film with the voiceover turned off, but there’s something rewarding about engaging with the nuanced arguments the work is making about the development of popular culture. Subtle and well-crafted, Felix Gets Broadcasted looks back at how figments of the 20th century imagination were disseminated, raising important questions about how these ghosts persist into the present day.