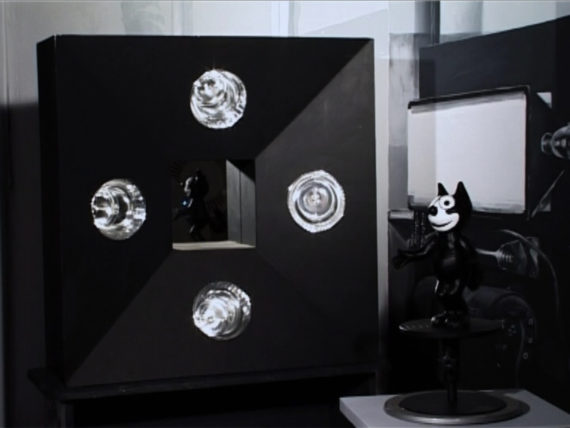 Mark Leckey keeps things. More than just an artist, he is a hoarder of epic proportions. His 30-year career is littered with the objects, images and detritus of 20th century popular culture, a lexicon of cultural symbols that formed not only his own cultural consciousness, but that of many others. On one fateful occasion, Leckey came across a photograph taken in NBC’s New York studio in 1928. It was an image of a papier-mâché cat, on a record player turntable. That photograph documented the first-ever test screening of a television broadcast, of which Felix the Cat was the perfect test subject.

Felix was an early cartoon, an anthropomorphised black cat that was at the height of its popularity in 1920s America. This papier-mâché Felix remained the NBC guinea pig for another decade, as its experimenters toiled for high definition. For Leckey, his discovery inaugurated an obsession with the grinning black cat. This feline now occupies a unique and mythic space within his own artistic practice.

In Felix Gets Broadcasted (2007), Leckey recreates those nascent moments of television broadcast. He spotlights Felix in a flickering blue light, as it circles on a turntable. Like much of Leckey’s film work, the video is eerie and ambiguous. The frame switches to an ominous open door and back to Felix stood alone, accompanied by only the mechanical, spiritless hum of old-school film equipment.

Leckey’s digital recreation of this pivotal moment nods to the technological developments of both the previous and present century; it represents a slight turn towards our present moment. Following those early televisual experiments, the broadcasted image marched firmly on to become a dominant cultural form. Boundless broadcast is a phenomenon of our post-internet age and a heightened consumption of media is a defining aspect of human experience. It’s a reality that does not pass Leckey by. As Mark Sheerin has pointed out in Hyperallergic, his work exposes a ‘slippage between our physical world and the realm of technology’ – a slippage that is uniquely reflective of contemporary life.

Felix occupies all manner of forms within Leckey’s practice. He is drawn to the idea of the cat existing in multiples, simultaneously image, object, concept and so on. Leckey describes the experience of finding that 1928 photograph of Felix in a guide to his 2013 Nottingham Contemporary exhibition: “I thought that was magical. I liked that it was a two dimensional cartoon, that became a three dimensional doll, that then became this electronic entity that got broadcast out into the ether. It went through stages of transubstantiation.”

Over time, Felix has become a talismanic figure. The eerie uncanniness of Felix Gets Broadcasted bears on the idea that this cat literally haunts Leckey’s work. American curator Peter Eleey, in collaboration with Stuart Comer, organised Leckey’s 2016 exhibition at MoMA PS1. Speaking of the artist’s obsession with certain objects and images, he suggests that the artist returns to items that “have held some outsized power for him.” In an interview for the Guggenheim, Leckey says of his own process, “I make a lot of things to get them out of my head…to examine them, and to exorcise them.” That Leckey continues to return to Felix suggests that this process isn’t over yet.