Rachel and I ran the first workshop along with Sam Orton our storyteller and Matt Voits  helped with sound, (currently doing a PHD at Nottingham University, and volunteers with a refugee group) on 16th June ’17, a warm sunny Friday morning, which stretched into lunchtime. We all simultaneously arrived in the car park, holding bags of art material goodies, treasures, sound recording equipment, evaluation forms and a Plan for the morning. Due to our individual long standing experience of facilitating and running workshops, we knew we may have to change the plan at the drop of a hat. A dynamic flexible plan! 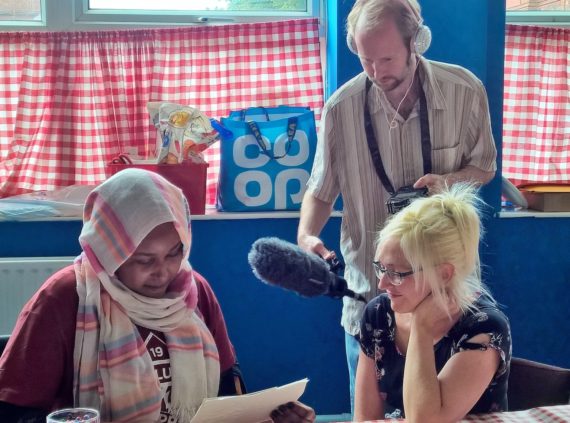 We knew to expect language barriers and it turned out the group could have up to 30 languages between them, often with Arabic being the nearest to common shared ground. The WCE are practised at supporting each other with communication, we keyed into this, drawing more of the group into the project. I had asked one woman who was not too keen to participate if she would help us in supporting those with less English language, she went on to create a beautiful treasure which was based on her hopes for her future, a treasure she did not yet have but fully intended to have at some point.

Victoria (Group Leader) had let people know the week before that we were coming and explained the project, inviting them to bring a treasure along. Rachel had previously been in to meet with the group in November last year to introduce the project idea.

Part of our flexible plan is, we know from experience that people have busy lives, lots going on and may not have time to think about bring a treasure. We were ready with alternative ideas and ways forward to help people think about treasures in their lives.  Other than this the session went to plan with 11 group members attending and the other members taking part in a cookery lesson which would result in lunch at 12.30pm. Between 10am- 11am most of the WCE members went to play Netball in an organised session, Sam gamely joined in to get to know people, whilst we set up. Sam was so impressed with how it was run she intends to take the idea to a group she is currently working with in Manchester.

After introducing ourselves, Sam, Matt and the project, we had samples of re-created treasures based on our own pocket sized treasures to demonstrate the art materials, differnet approaches to interpreting treasures, which we explained with much gesticulating! We emphasised there would be no judgements on creativity, encouraging a freedom of interpretation and expression! 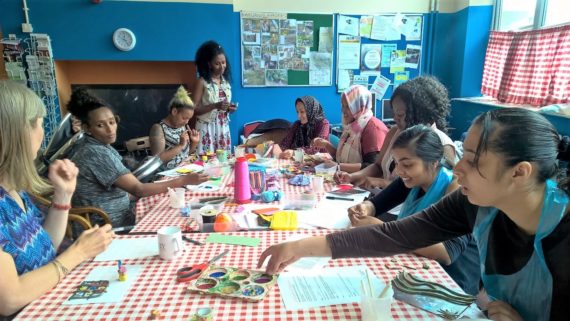 We put some structure in place for the re-creating of treasures, held within in the choice of art materials and the ‘base’ we had for the groups to work with and on. The aim was to give an overall homogenous feel, with much room for freedom to express individuality. Also due to the pocket sized nature of the project we kept the base sizes to just over A5, people being able to make as many as they wanted within the time frame. The group keenly tucked into the art materials, asking questions as they went. The memories of a Mothers  Day handmade card initially inspired some women.

I should explain the layout of the space: it is an open plan area, with a small children’s play area, and a large table for us all to work on, the kitchen being to once side sectioned off, but felt like it was part of the space. People were coming and going, small children were playing and doing what they do best, getting Mums attentions. I found myself gently rocking a pushchair, playing beek-a-boo with a tired baby and chatting about art possibilities all at the same time. Rachel and Mat were recording chatter and snippets of stories that came out naturally through conversation, then asking people to one side of the room to give the more in-depth story behind the treasure being made, if necessary going outside where it was quieter, making sure no babies escaped in the process! The room had a real buzz, focused with an easy fun to it, I loved it! 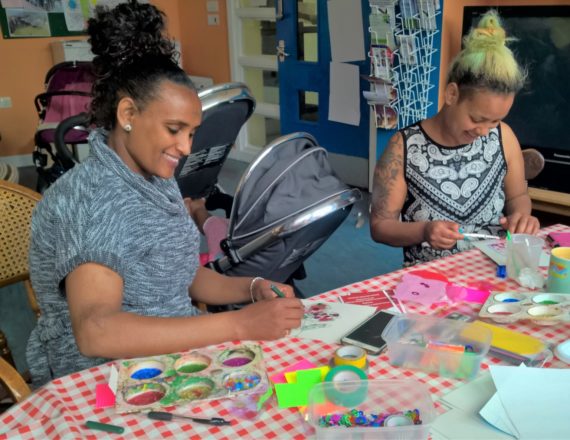 The stories and treasures: As well as recording the stories, we offered options, people could write their stories down in their preferred language, which we would have transcribed, or we could write them down as they talked.

Here are a few of the stories and comments:

Sam talked to one women, who was struggling to find a positive memory based on her live experience to date, but very seemed to very much want to create a treasure with a story. Through gentle chatter, the women talked of how now she shares a house with 6 other women whom she likes, and saw this as a current positive in her life. She made two art works, one representing the seven bedrooms and one showing the emotional feeling of sharing the house.

Another women, who had not been too sure if she wanted to participate, created a future treasure of a wedding ring, talking of her hopes for the future. 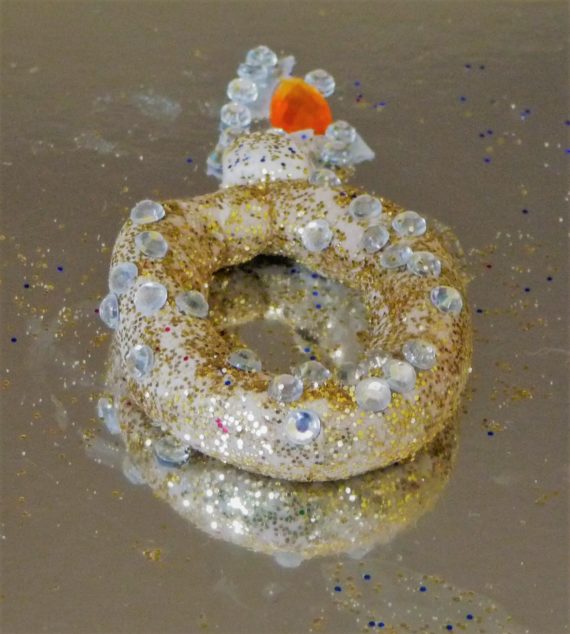 Two women both created a celebration set of drinking cups, a pot, and bowls, used on special occasions. When I asked which direction to photograph the scene from, they explained that the handle faced the Mother at the head of the set. I am hoping I have understood this correctly, and need to re ask the questions on my next visit? The focused time on these can be seen in the tiny details. One of the women said “how pleased she was to be able to remember a happy time, and how it took her mind away from current difficulties.”

Another women, who had been cooking in the kitchen, was keen to create a scene with the sun and clouds, explaining “It’s a journey where life isn’t going to be a smooth thing, it’s a wave, where sometimes you get the happiness and sometimes the sadness.” 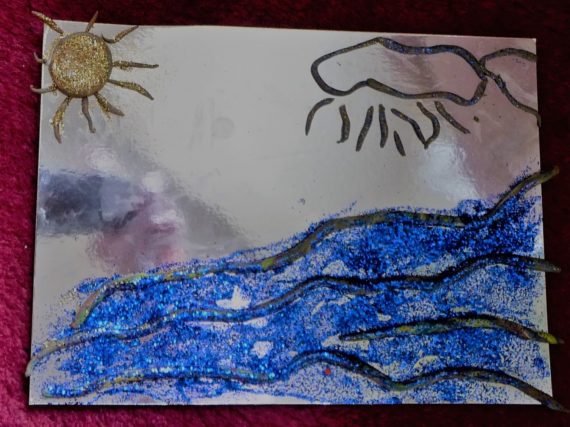 Time was running out, some group members had just arrived, others still carefully creating, lunchtime was near, the crafting table was needed to be turned back into a dinning table. The group members wanted to continue, the decision was made that people would just find a space to eat lunch. Lunch was like a buffet party, with mingling, chatting and a relaxed informality. The food was delicious. Despite the language struggles, crying babies, toddlers running around and the many other difficulties the Women’s Cultural Exchange group between them possibly encounter, the warmth and acceptance of us and the project A Pocketful of Treasures was impressively energetic. Feedback from Victoria, who also took part, was very positive, as she had been encouraging and working towards the women looking at their past, and then moving into the present and possible future, as well as practising English language skills. Feedback from the Women was very positive, they had much enjoyed the session, creating and having their individual stories recorded.