I haven’t written any blog posts for a while. Not just on here but also on my main blog. When I started this residency I wasn’t sure where it would lead me, but that is what is the exciting thing about working with archives and having a practise that is very research based. The research has taken much more of my time than I had originally thought and although ideas are forming and there is a layer of materials: paper, lead, ink, glue, thread, textiles, screens, acetates, plates, cups, saucers, clocks, poppy seeds, marker pens and card, slowly covering surfaces in my studio that would indicate that making has begun; I still haven’t reached that point of ‘I know exactly what the final work will be’

So, on that note, I will continue to share my research in the hope that the writing and sharing process will help to cement my thoughts

Finding an original 1921 poppy in the archive has seen an unexpected connection between some research I had already begun for another project called From Wasteland to Wasteland. 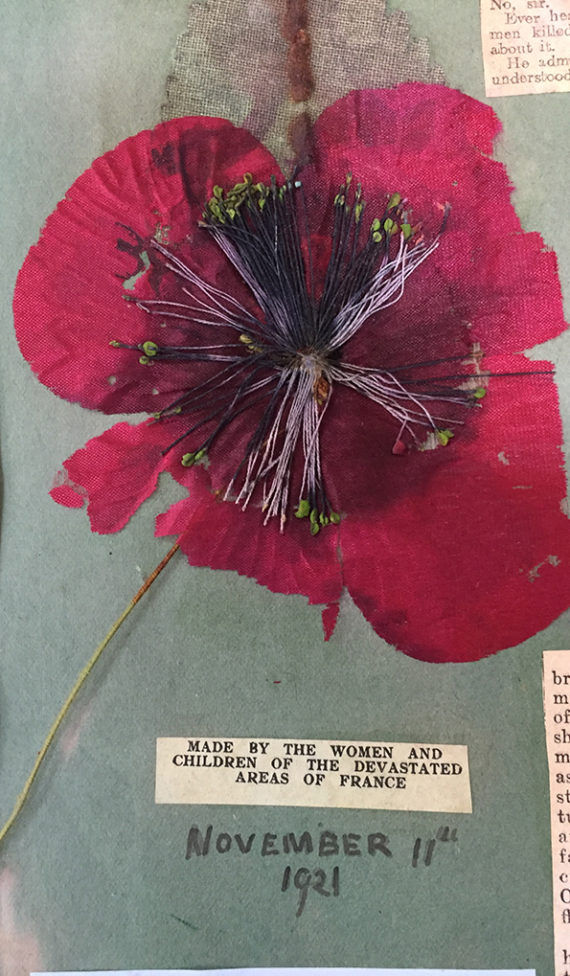 My interest in the poppy was ignited when visiting the Lochnagar Crater at La Boiselle, France. I have written several blog posts about this visit and the subsequent work and these can be read:

The Remnants of Remembrance

The poppy as a symbol of remembrance can be a contentious subject, particularly if it is questioned. With numerous options for poppy colours this too can add to the debate and in particular I am aware of strong feeling surrounding the ‘rights or wrongs’ of wearing a white poppy.

RED for remembering those servicemen and women who were killed during WW1 and in subsequent conflicts. Associated with the Royal British Legion

WHITE for remembering those killed in conflict with an emphasis on a commitment to peace. Associated with the Peace Pledge Union

BLACK to remember the contributions made by the African/Black/Caribbean/Pacific Islands communities to various wars since the 16th century. Associated with BlackPoppyRose

Alongside the original poppy in the Canterbury Cathedral archives, contained within a scrapbook once belonging to Mrs Ella Constance Woodruff are original newspaper cuttings reporting the the first poppy day in 1921 and recording the wreaths laid at the Cenotaph that year. 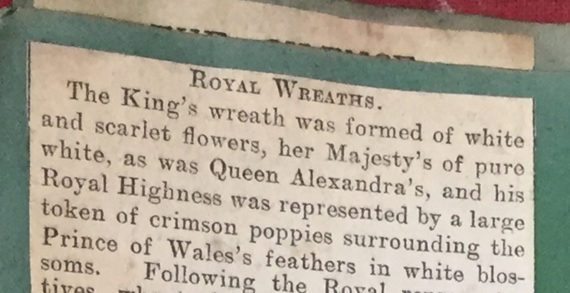 Interestingly it appears it was not an issue that both Queen Mary and Queen Alexandre laid wreaths made entirely from white flowers. Given that this was also the first year that the poppy had been adopted as a symbol of remembrance it would seem that originally it was not important what colour the flowers were or even what they were and seems sad that the topic of what is deemed the ‘right’ colour poppy to wear seems to cause problems today.