It’s been a little while since my last post and that’s mainly because I contravened my rule of not doing any unrelated performances. And so, last night I found myself interpreting four performance scores from 1970 in a cold warehouse gallery in Norwich, having spent the preceding week feverishly trying to publicise the event. On top of this, it’s been a busy week for the project.

On the 13th I travelled down to the New Wolsey Theatre in Ipswich to deliver my Harmony flyers and to take a look at the stage. The staff are lovely, and have reassured me that my original concern about performing in a venue with 400 seats was unfounded because for PULSE they curtain off some of the space to make a more intimate 100-seater studio theatre. Phew. I’d been gearing up to it just to be prepared, but the performance is designed to involve participants and focused listening, and is therefore much better in a smaller set-up. I have been drawing pictures of my stage plan so I don’t get into a muddle with the vast amount of AV equipment I’m planning on using (see photos).

Another bit of good news is that via DACS I now have permission by the Estate of Remedios Varo to use a projected image of the painting in the performance. This is a huge relief, and although it will cost a bit in licensing fees it is going to be essential for the audience to see a high-quality reproduction in the absence of the actual painting.

On the 20th I went to London to see some exhibitions, and was very excited to see Jeremy Deller pass me on the escalator at Liverpool Street Station. To celebrate, I went to Oxford Street to test out the functioning of my Pin Drop hypothesis. Not really: I was going there anyway to do that. I was just extra excited. I have decided that the only fair way to decide if you can hear a pin drop is to not look at it hit the floor. It’s significantly easier to imagine a sound (or mentally amplify it) if you can see the source. So, I dropped two pins whilst looking surreptitiously into shop windows and the results are as follows:

2. Corner of Oxford Market/Market Place, looking at information post: You can hear a pin drop. But only just.

I also tried it outside Queen Elizabeth Hall and couldn’t hear anything, but that has a funny gravelly concrete floor surface so I wonder if that affects it? I will do a study on different surfaces too, just to be fair.

I’ve been testing out the glut of equipment I bought before the end of the financial year, including a short-throw projector for my Harmony performances. I’m impressed with how large an image you can get from a short distance, which is absolutely ideal if you are doing any kind of live video feeds, or anything where you need to easily get at the controls. I also bought a projection screen so that the whole thing could become part of a set: any images projected are going to be human-scale, like a classroom demonstration, and in the case of the Varo painting, the size will be like standing next to the real thing.

I’m going to see the New Wolsey Theatre tomorrow to discuss tech, and so I’m glad the projector works as expected. Next thing to test is my exciting Britney mic. Look, no hands!

Thanks to Sophie Cullinan for your comment on 7th April: I have been mulling over the idea of getting a street performance pitch too, but need to do a few more tests of the pin dropping to see if it is actually likely to be a spectator sport! It is definitely a problem, making subtle street performance in a place like Edinburgh in August, but I am willing to give it a go. It’s interesting to see your approach to ‘not selling a show’ in your blog /p/1473932/

I certainly intend to try out the pin dropping in that area of the city anyway, as there might be unexpected quiet spots, so maybe doing some under the street performance banner would be good for a short burst of visibility before I skulk off into the alleyways again. 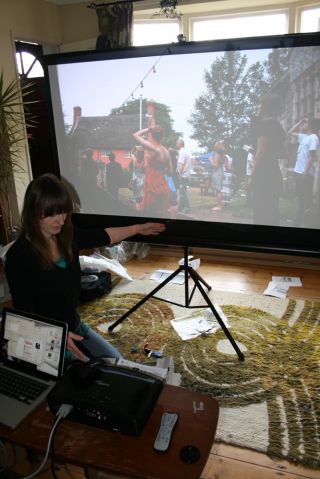 Well, I have now submitted both of my pieces to the Edinburgh Festival Fringe programme, so there’s no going back. They are:

It feels good to have got the publicity sorted out (and the same with my Harmony piece, for which I’ve just ordered 1000 flyers of my face), but it gives me the panicky sensation of not having done enough on the actual work. I think this is something every self-employed artist (of any discipline) on a budget has to grapple with: how to make the time to develop work whilst simultaneously doing your own marketing, design, accounting, and, dare I say it, risk assessments? I should say that it requires self-discipline and a strong work ethic, but I can hardly talk as I’ve purposefully ignored my computer for two days and decided to paint a wall in my garden instead. I mean that in the sense of decorating, not doing a painting of a wall.

Today I have started researching the individual objects on Varo’s stave, and begun developing my interpretations. Some are going to be different from my earlier performance, now that I’ve done some more reading.

One that I skipped past in my early performance (“A pink flower, possibly a carnation”) I have decided probably IS a carnation, given that it is apparently used in Mexican ceremonies and is the national flower of Spain. I’ve been wondering how to translate plants into sound, and have come across some hilarious websites about plants ‘screaming’, and some more promising research by Bonn University about the release of ethylene when plant tissue is damaged. We’ll see where that goes. In the meantime, I have decided to play with the translation option, and have turned a diagram of the molecular formula of cyanidin (a compound which makes carnations red) into a musical phrase (see image). 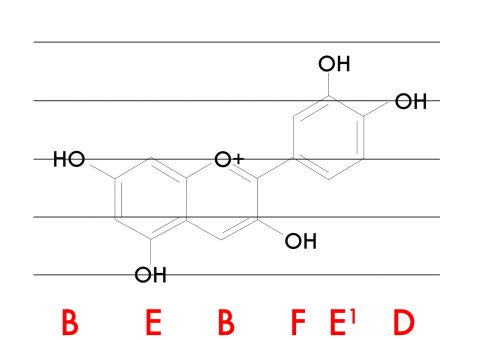 I am really excited about An Audio Guide to Varo’s ‘Harmony’. I have finished reading the out-of-print book I bought (Unexpected Journeys, by Janet Kaplan) and have discovered that a good number of Varo’s other paintings also involve music being generated from strange objects, such as strands of hair being bowed. Most excitingly, her last unfinished work involved a figure playing a slice of tree trunk on a wind-powered record-player device. I know this has recently sort-of been done by Bartholomäus Traubeck http://traubeck.com/years/ but he was using a camera and translating the patterns into music samples on a computer. I think I would like to build one that’s entirely mechanical, like the one in the drawing. Maybe this is the start of a longer project creating performances based on each of her music-based paintings? I’ve also just figured out that next year is the 50th anniversary of her death, and so it would seem appropriate to make something of this. I have been in touch with DACS to acquire permission to use a digital slide of ‘Harmony’ in the actual performance, and they are checking with the Estate. I really hope they agree: the work is increasingly about celebrating this painting, with the more research I do, and it would be great for the audience to be able to see a good quality reproduction.

I have started to buy items for the set, including 5 metal rods to form the staves (see photo). I got these from a DIY superstore, which usually seems to be the source of my art materials. I have also bought some flame-retardent spray for proofing my set, which is not something I’ve had to do for my own work before. It feels pretty professional…

Also, I’ve sent off my contract with the venue I am hoping to use in Edinburgh for Hear a Pin Drop Here. I can’t submit the show to the Fringe programme until I have received a signed contract back, and the absolute deadline is the 11th. Still, I have now set up a basic website (awaiting most of its content) http://www.hearapindrophere.com and have bought 600 pins (that’s the standard size of the box: I’m not being extravagant). 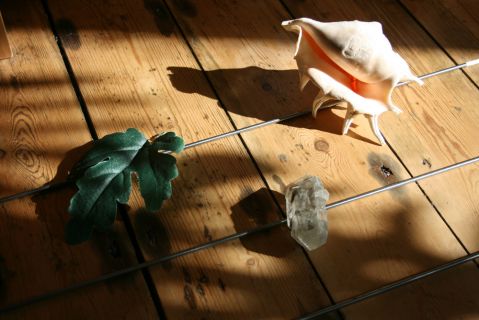