On Saturday I performed a short extract from An Audio Guide to Varo’s Harmony. This was presented at a networking event for artists in the Eastern region working with live art, and took place in the studio theatre space at The Junction, Cambridge. It was a great opportunity, as it made me select just five out of a potential eleven objects to talk about, and to simplify the format for a low-tech get-in. And actually, I think it has improved the piece. I had previously presented all of the sounds in a final pre-recorded composition at the end of the piece, which was going to become a live-looping section in later performances, but now I have performed it as a live series of noises in quick succession I think that might make more sense. It also has the potential for more audience participation (volunteers taking on specific assigned noises), which was what I had originally intended. Funny how it takes a few months to work out all these possibilities…

Junction performance of An Audio Guide to Varo’s Harmony (extract)

Well, it’s been a while. Obviously I went to Edinburgh in the meantime, and had a blast. I did actually write quite a lot about it on my other blogs http://www.oneminutebirdwatching.com and http://www.hearapindrophere.com as I went along, and I have also contributed a post (about incorporating chance into my work) to The Peripatetic Studio, which is a blog by Viccy Adams and Samantha Silver and is “dedicated to the spaces we work in and how they impact on the creative work we produce”.

It was great to be asked to write about a specific aspect of my work so soon after Edinburgh, because it helps with the withdrawal! It was wonderful being a full-time artist for just over a week: days were full of performance and research, and nights were full of video and sound editing in the flat. I had said in my GFTA application that I wanted to treat Edinburgh as a residency, and that is what it felt like.

So, onwards. I now need to perform ‘An Audio Guide to Varo’s Harmony’ twice more before March, according to my proposal, and thankfully I have just been invited to perform an extract this Saturday at The Junction in Cambridge, as part of the Mad Artists Tea Party. It’s a great opportunity to try out an idea I’ve had for the structure. I want the final “this is what all the objects sound like altogether” bit to be created live, rather than as a pre-recorded composition, and so I am going to try out a section in that style on Saturday. Fingers crossed… 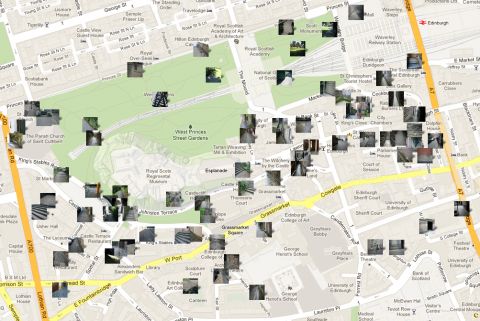 I have over fifteen years experience as a practicing artist, focusing on intergenerational participation. My projects have taken me around the world, working with groups in Finland, Japan and Hong Kong. From 2015-2018 I worked as Public Engagement Coordinator for Tramway, Glasgow, beginning with the public participation programme for Turner Prize 2015. I am currently a postgraduate researcher at University of Dundee (Psychology), exploring the effect of family art participation on child development, in collaboration with Dundee Contemporary Arts.