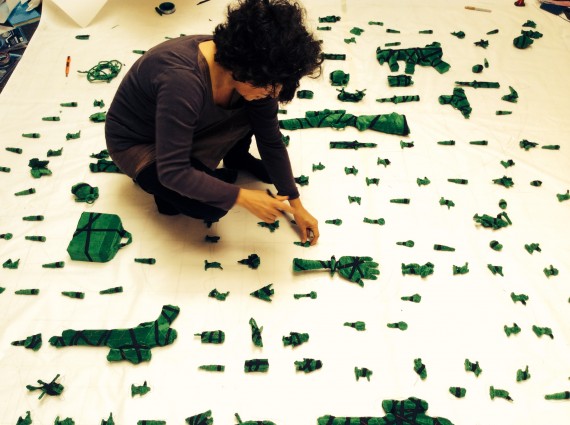 Child’s Play : the material of the work

We were installing yesterday at IWMN and the installation is up. The Book of Debts piece is also almost ready, just awaiting lighting. It was a very productive day, thanks to a brilliant team of staff and volunteers. Am just doing final edits on my Letter to Visitors to invite them to contribute to The Book which will hang above the jars of ashes of the remains of the previous books.

The wrapped war toys are already evoking some interesting responses, though the installation isn’t yet open to public view. One of the threads of the work, connected to the broader theme of conflict, is the issue of using these children’s war toys (amongst other objects) as material in themselves and how that might land with viewers, both children and adults . Am I fetishing these objects, critiquing them and/or asking the audience what their position is on them and their place in the lives of our children and our own psyches?

Being a mother myself, with a 6 year old son who loves to engage in imaginary conflicts on a daily basis with whatever he can find, I am constantly trying to work out my position on this. Wooden swords and sticks seem ok, but replica guns not (though we do have water guns and a foam pop gun somewhere in our house).  Allowing children to play things out with props of some kind feels natural and necessary, to totally disallow this feels like a form of control that is not healthy or helpful. Yet introducing life-like props such as plastic hand grenade, guns, bullets – all of which you can buy really easily (as I have been doing for this work, only landmines seem impossible to find) which look just like what is out there on the news and being used to wreak destruction and bloodshed on a daily basis, feels like a confusing and irresponsible message.

And yet we allow our son to play strategic war games like Clash of Clans on the ipad which have graphic visual accuracy; although not first person violence, they involve you sitting back to watch your troops lying in wait, then periodically massacring the enemy (though you can also ‘heal’ them). So are we hypocrites?  Are we allowing the natural expression of violence that we all contain (though seems to be particularly pronounced in my son as opposed to my daughter) and needs to be dissipated through play, or are we encouraging the rehearsal of violence later out in the real world? Is this contingent on what is used to play the violence out? Or is it contingent on how emotionally connected and free to express themselves children are in other areas? I don’t have a single position or answer but this blog is one way of possibly moving towards one.

According to writer, psychotherapist and conflict resolution facilitator Arlene Audergon in her enlightening book The War Hotel which I am half way through and shall be referring to regularly, children know better than us the difference between the real and the imagined and use strategies of play to process, personify and integrate conflict in far more natural ways than we can often accept or understand as adults.

She illustrates this through the symbolic  idea of the ‘Bogeyman’ (synonymous with terror) and how our relationship to him changes from child to adulthood;

As I open up the news, I see the current Bogeyman of choice in the media staring me in the face – in the form of an IS terrorist/fighter/militant (tick a box) taglined with a quote from the PM: ‘We must destroy this evil organisation’, and an image of an aerial strike on Syria on one of their bases that looks very much like a frame from one of those war strategy games ipad games I was talking about earlier. ..

Much more on this later.

I’m off to check the lighting of the Book of Debts, and that no objects from the installation have dropped to the ground – followed by a filmed interview with Alnoor, the director of the Trienniale, on the work, scribing the first stories into the book, sending the letter to print and an ATM artists  networking event in the evening. Phew.