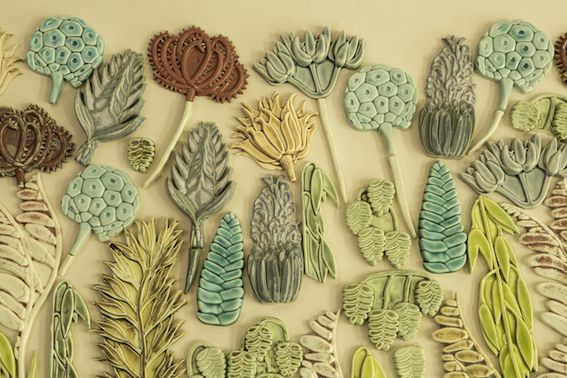 New feature in the Ceramic Garden

It’s taken two years to complete this particular feature in the garden at The Ceramic House. And the detail tiles are much older, dating back to 2005 when I was commissioned to make artworks for three courtyards in Blackberry Hill Hospital in Bristol. For that public art commission, I collaborated with a lighting artist who installed lighting into my ceramic pieces.

This section of the garden was a dead space leading from the side street to the garage when I moved into the house in 2008. There was a fence blocking it off from the garden. Since then I have reclaimed it and turned it into the breakfast terrace, because it catches the morning sun. I redesigned and tiled the floor and completed the bench in time for the May 2012 exhibition.

The bench is faced with reject ceramic tiles made for the water feature in the café courtyard of Blackberry Hill Hospital. I spent many months slowly making these pieces, allowing them to dry over a curved form to be eventually applied on to the concrete cast, only to have my worst ever kiln disaster when I discovered that they had all slumped flat in the kiln! Needless to say I did manage to remake them in a few short weeks in time for the grand opening of the hospital, but not without a lot of stress! So I kept the rejects until I found this new use for them. Above the bench is a row of tiles left over from another courtyard in the hospital. The original feature consisted of a continuous row of these tiles at eye level that spanned four walls of the courtyard. At dusk, blue LEDs came on, glowing from inside each hole in the tiles, a beautiful, calming effect.

So I made, with the help of volunteers in my studio, a huge quantity of turquoise tiles and decided to cover the wall with these and finish it off with the second two of tiles with LEDs inside.  It was completed it just in time to make the most of the spectacular summer weather and sit outside at night with the lights glowing out of the wall.

The inspiration came when I went on my first visit to Portugal in 2012 and discovered that the whole country is covered in tiles! (Well the buildings anyway.) So started my fascination with Portugal and the blue and white Portuguese tile collection.

It took 3 (working!) holidays in a row over 3 years to bring back enough tiles from flea markets to tile one wall of the bathroom. The other feature wall consists of 160 press-moulded tiles, which were inspired by the designs of the tiles on the facades of Portuguese buildings. The third wall is simply flat hand made white tiles.