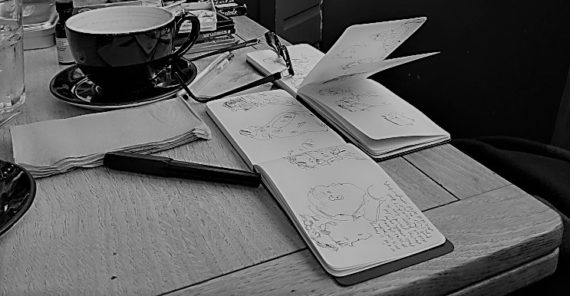 I’ve begun drawing again, daily. It is an intense experience. I draw to capture life, movement, persona. I draw in cafes mostly. People are stiller there whether in conversation, reading or staring out of the window. I go to the same places and become familiar with the faces and bodies that frequent them. 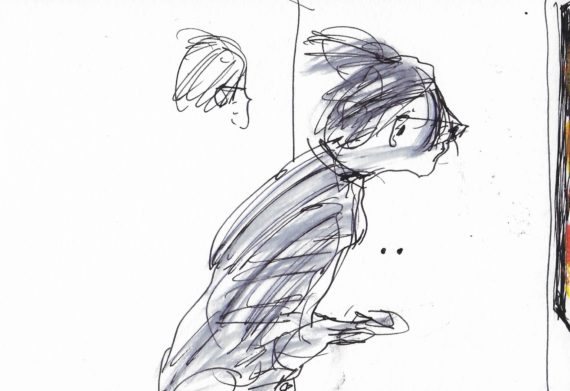 They said yes. I’ve been awarded a grant after the second try. I begin my Gallery Watching in September. The fear of what I have left myself in for comes and goes, as does my confidence in my drawing. Nevertheless, I keep on doing it. I have to. I need to. Meanwhile I take tentative steps outside my comfort zone and begin drawing in other cafes and indeed art galleries. It is an exposing experience but I need to accustom myself to it. 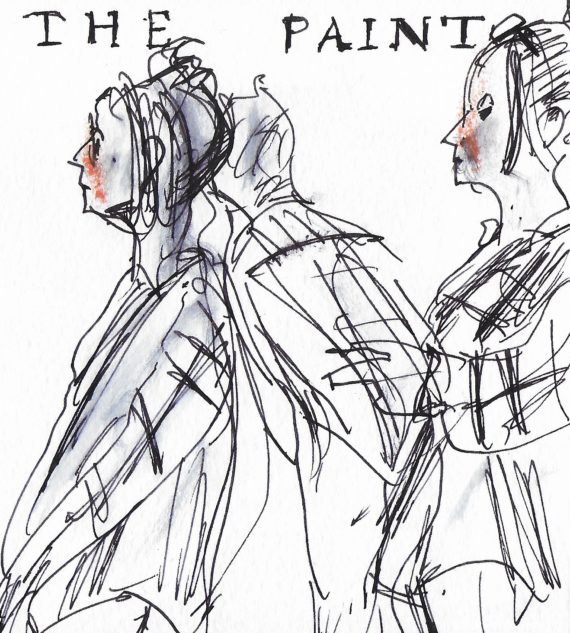 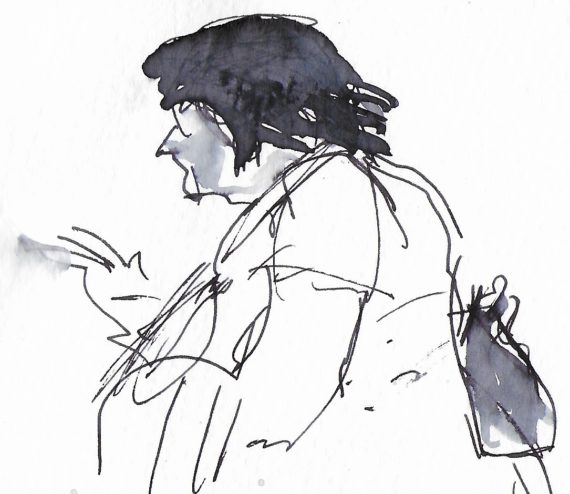 It’s a compunction that certainly began at art school. Drawing was always held up to be the ultimate in expression, the fundament of it, if not the whole. For me it has gone beyond that, though I must admit to seeing some of my past tutors (usually in their role as panel members, passing judgement) in my mind’s eye as I draw and feeling the warmth of their approval at my trying, if not always succeeding. To try is enough, it seems. 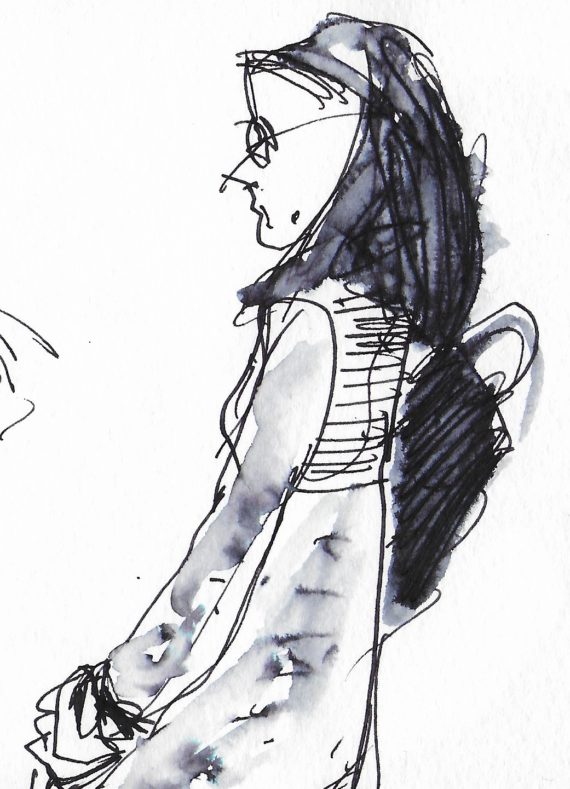 It’s been a week totally dedicated to writing and trying to earn a living and I am rusty. It hurts. I know what is possible but my brain and my hand don’t. He offers encouragement from the wings, couching it in sporting analogies. And I keep on going, trying and the perseverance seems to work. I loosen up.

Turning my attention from myself and my stumblings to them and the details of their physiognomy, gait, clothes, gestures and narratives. Are they Spanish or Italian, do you think? I ask him, whispering because they are at the next table. 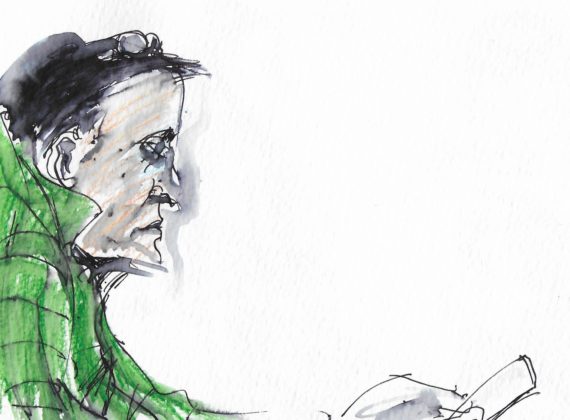 Spanish, we both agree as the mother/wife turns to smile at me. And then there is the other mother and daughter. 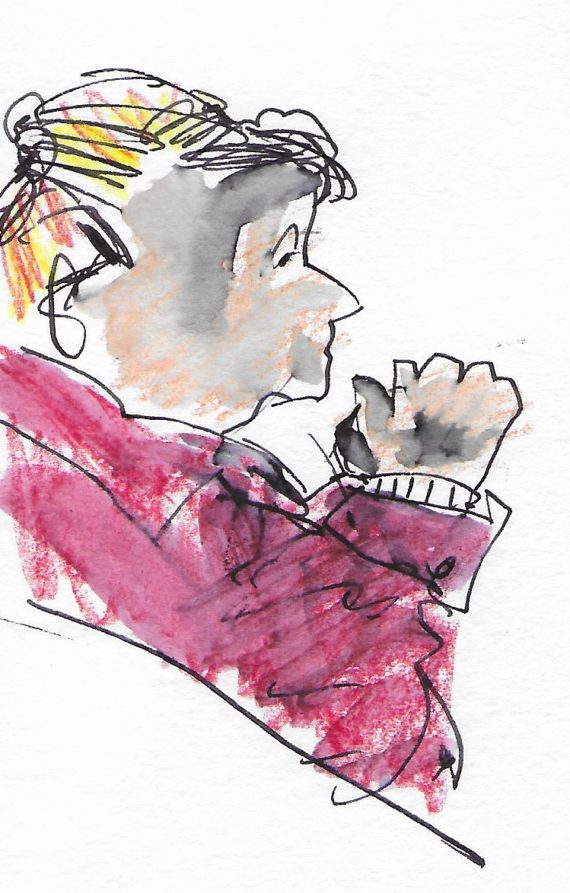 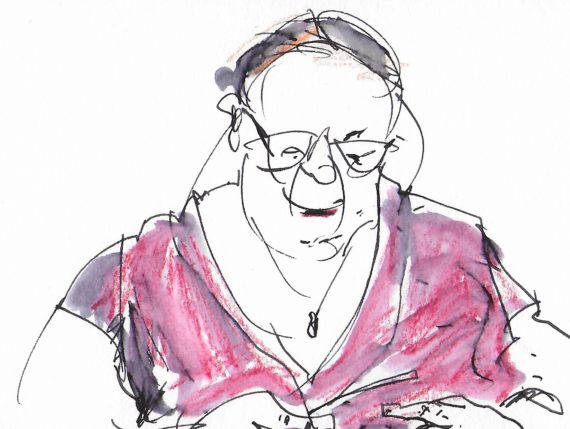 One so tiny, as she perches on her chair waiting for her daughter to bring her coffee. And the daughter, so floating in her red silk dress, and tall. I watch as she reaches off to remove sleep from her mother’s eyes. Can they possibly be related, or is the story I lend them awry?

We don’t stay long, the struggle has taken it out of me, but not before I draw the marvellous man with the wild hair reading The Observer, with food all down the front of his mauve sweatshirt. He crumbles a piece shortbread into mouth as he reads. At point he looks up and sees what I am doing and smiles. 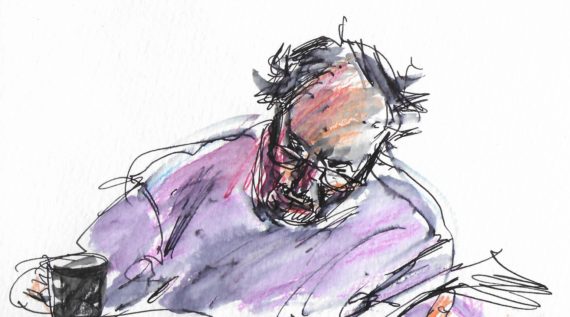 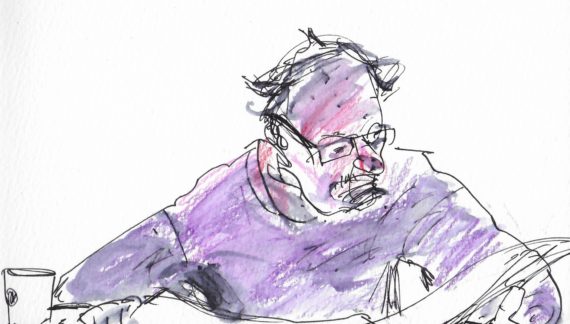 I’ve been thinking about sketchbooks. They are beautiful things, well they can be. I love the paraphernalia of them, the elasticated straps that hold them in place, the endpapers, the red ribbons that save a page. I like them small, pocket-size, hand-size and with hard backs and curved corners. They need to be books, proper books, not spiral pads. Books, always. I trawl for the best ones. Moleskines are a favourite, the black ones with thick watercolour paper. And I’m currently trying Pith and Arteza, though the latter is unreliable with supplies. I need lots. I like the restrictions they pose on the size and composition of drawing. All that possibility for white space.

I remember the first time I came upon the National Gallery’s collection of Turner’s sketchbooks. They were in a cabinet, under glass, obviously, but opened up. It was the intimacy of them – the curled edges, the fraying ribbons, the ragged covers, the spots of paint, the pencil marks begun but unfinished, the flooding of colour onto the next page, the rush of thought, the thrill of ideas, of composition, tried and failed – they were glorious. Are glorious. Then I came upon Hockney’s, not in the flesh, sadly but courtesy of the internet. What a joy. There’s even a video of him turning the pages. If he begins a drawing and can’t finish it, or is distracted, he leaves the marks alone and turns the page. And there they are left, and just as important as the successes. Marks on a white page (off-white is preferred – that glaring blue-white of cheap paper is akin to mass-produced cotton – let it be tinged with yellow, with cream like the true Egyptian variety) with all that room to breathe, just perfect. And it’s his confidence, the way he uses the shape of the book, the layout, the opening and the closing to frame his responses, some quick, some more laboured. You would never separate them from the other pages, the binding. They belong to the containment.

When I first saw them I was almost sick with awe. What’s the point? I thought. Now, I see more clearly. Learn from them. Learn. 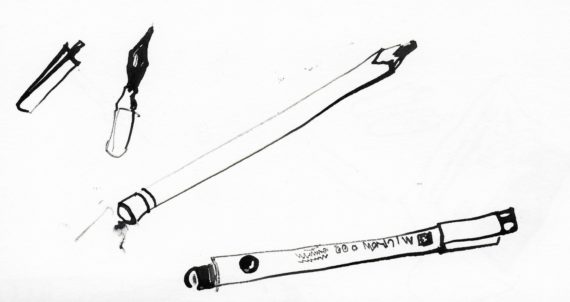 There’s been a gap. A drawing gap, that is. Well, not completely. I went away and before going had to finish 3 articles, so my drawing practice, sadly had to be put aside. It hurts when I have to do that. I fear the loss of it. So I drew as I travelled, in motorway services, petrol stops and then when we got there. 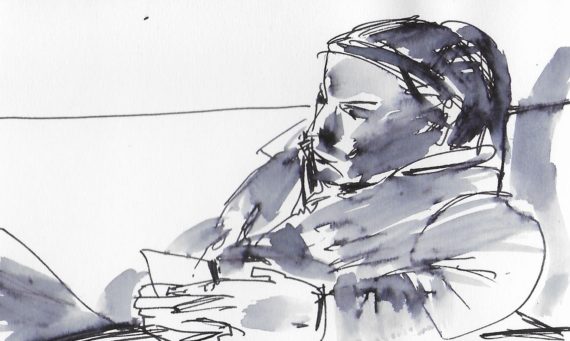 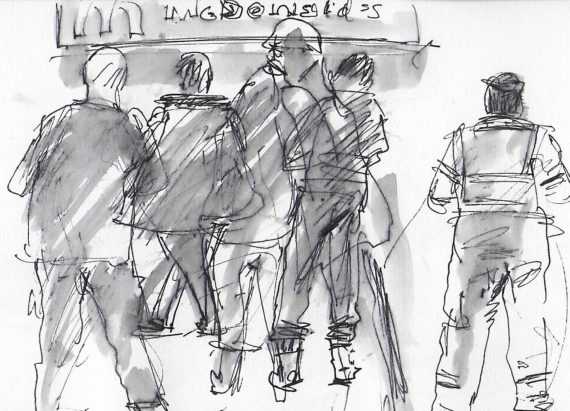 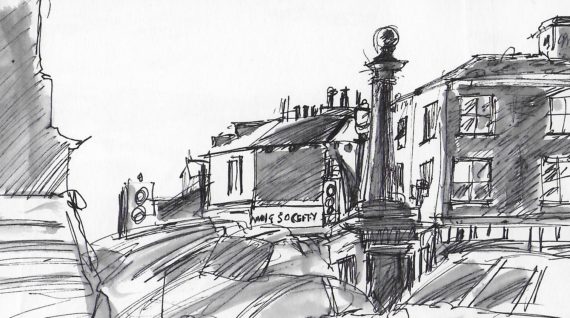 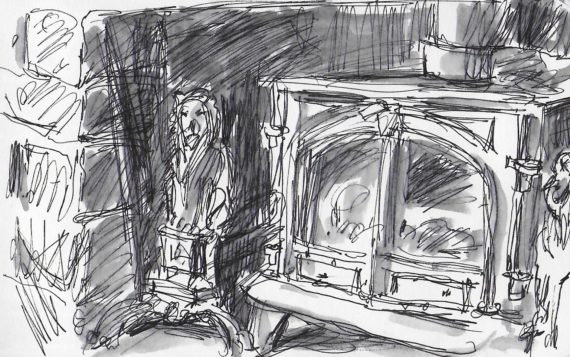 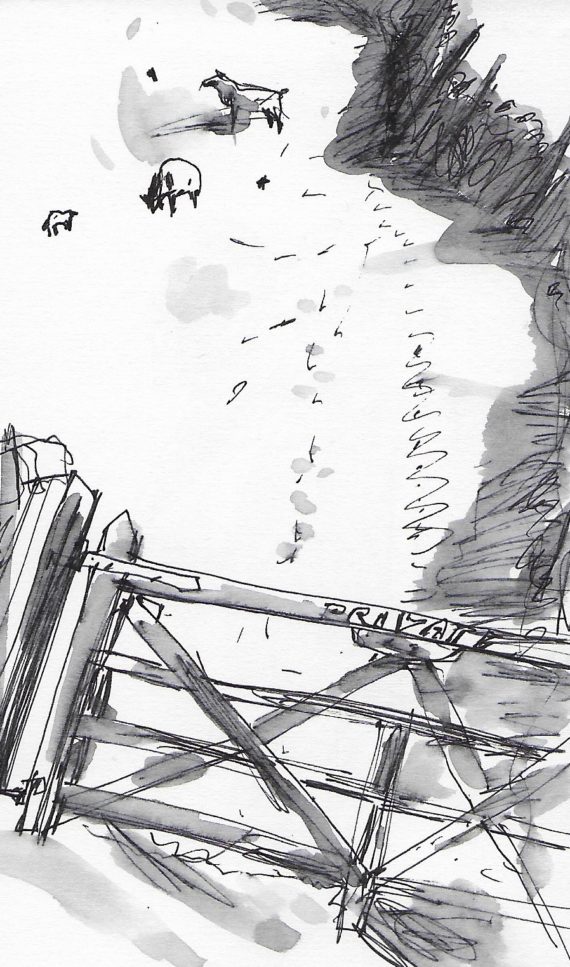 It wasn’t the same. I try to ask less of myself when on holiday by taking just one book, only a small one, and a few pens. And on my return I was finishing off my resubmission for funding, so again the thing I long to do had to wait. And now that it has gone I am ready. 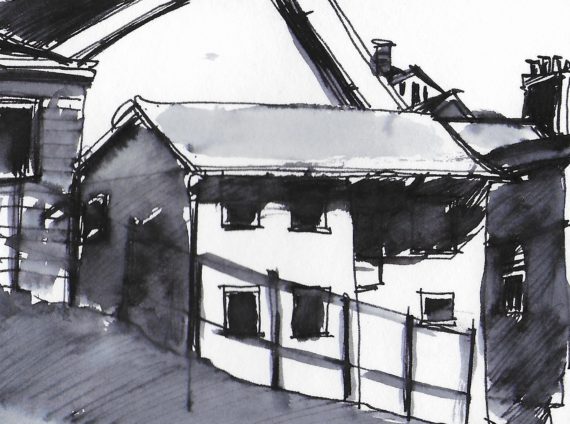 Yesterday I drew a cherry picker that has been parked at the harbour for over a week now. I’ve been itching to capture it, though my fingers froze in the doing of it. I shall return today. I hope it is still there. I love that urgency. The rest of my life is a slow one. Nevertheless, my confidence is not high, it’s been too long. But from tomorrow I’ve three days. Three days of intensive paying attention. Wish me luck. 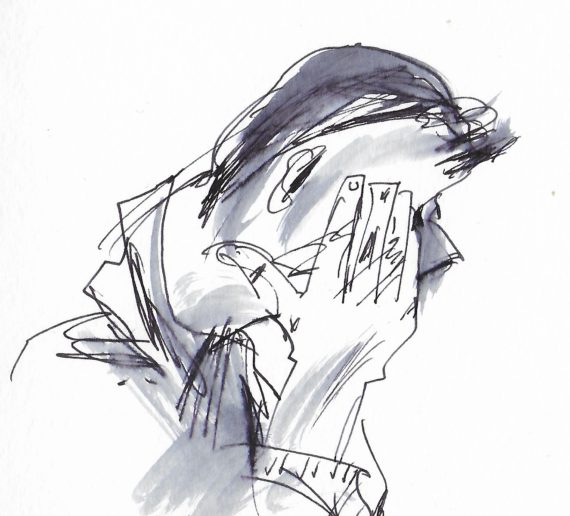 The point of any practice surely is to learn, evaluating as one goes so that there is some kind of betterment. Nevertheless, getting stuck in those formulaic methods of seeing and responding still happens, particularly, as with reportage drawing, the mark-making has to be so fast and reactive. 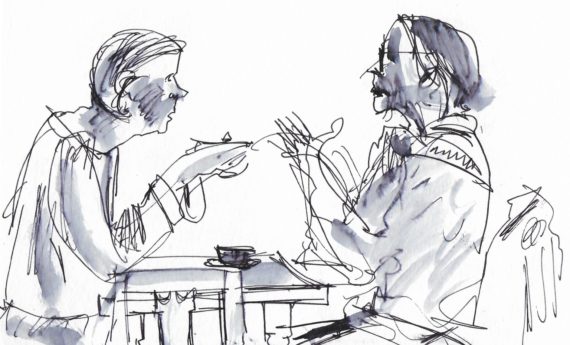 I know that my coffee shop drawings lack context. Too hung up on trying to show gait, details of clothes, interactions with others, I am often unable to describe the environment in which they are sitting or queuing. 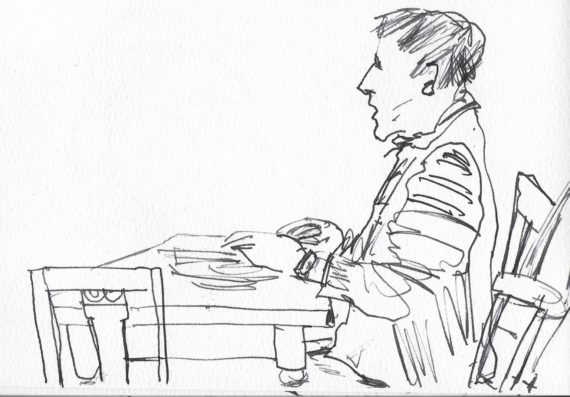 The intention is there but I have to say it’s the human content that most moves and engages me. 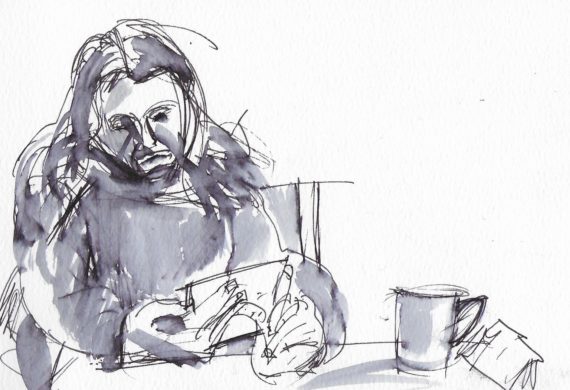 As do the personal narratives therein, or at least the ones I attach to those that I sketch. Like the girl with long blonde hair who sat at the table across from us watching some kind of broadcast on her phone (that I imagined to be live footage from Ukraine) her face full of concern. 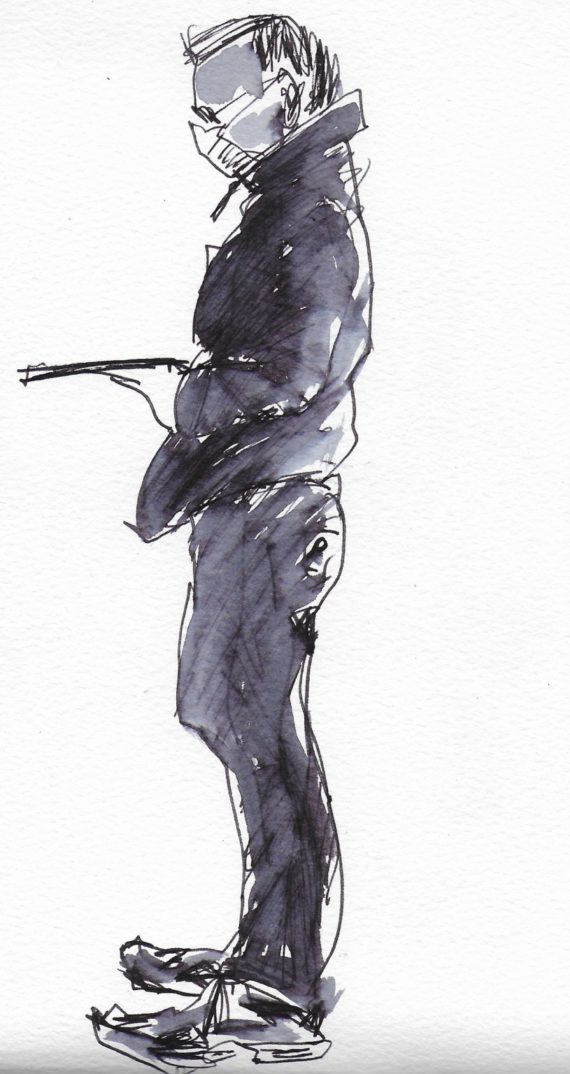 Or the man standing in the interminable queue reading the headlines of his paper, no doubt caught by the same awful drama that I imagined her to be. 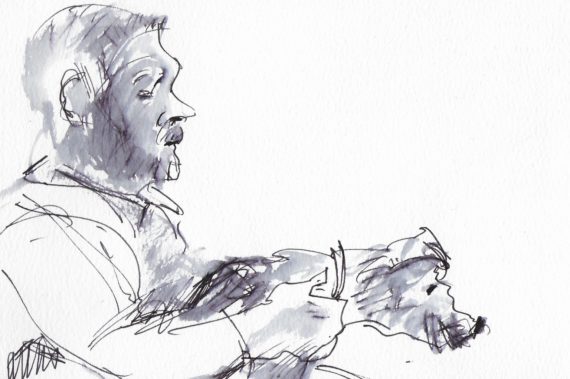 As was the man with the terrier, who he always balances on his knee, and his friend, who looks ill and lost, who I overheard discussing the invasion. 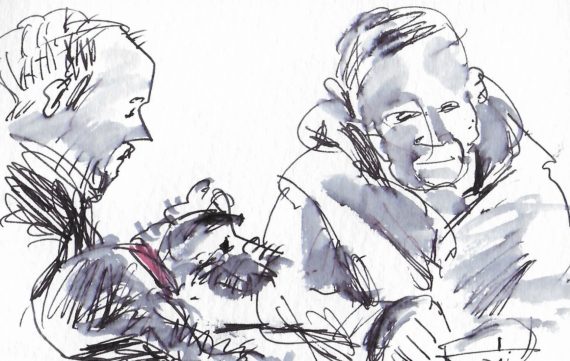 There’s so much to relate and sometimes my energy and my confidence fails me. And then there are the regulars who I try to draw over and over and don’t succeed. Some unnerve me because I sense their reluctance to be so closely monitored, like ‘Dylan Thomas’ or the ‘Track-suit Man’.

They are both shy, clearly, diffident men. Though ‘Dylan’ rallies when he has to engage with the staff, making jokes (or at least responding to theirs) but his awkwardness is there in the way he holds his body, lost in all that bagginess. And ‘TSM’ – he fascinates me. He is utterly self-contained and so decided in his dress. 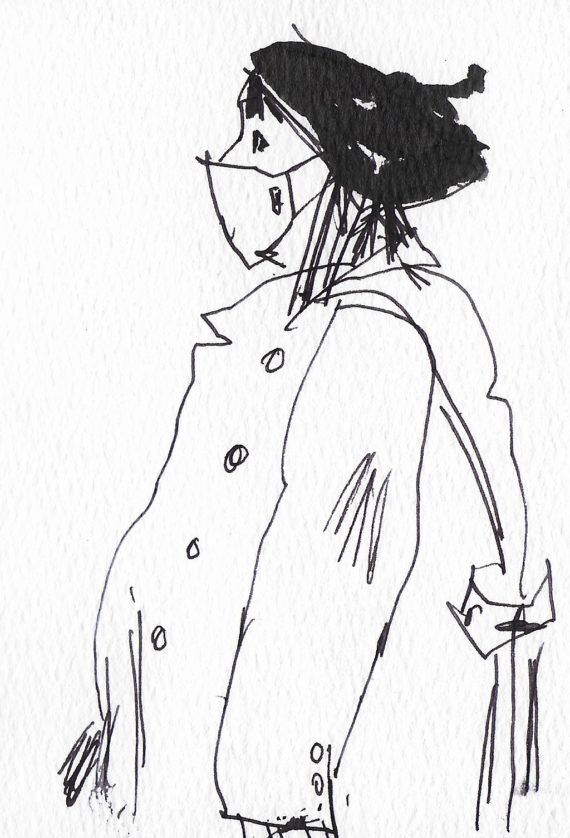 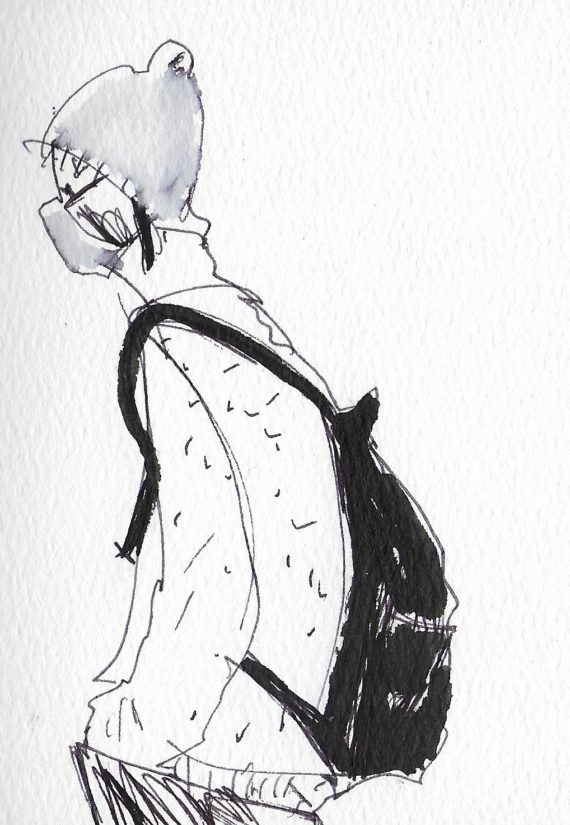 Do I harm these strangers by taking their likenesses? Do I hurt them by posting them here? I sent one image to someone I know vaguely and she seemed delighted with it and asked if she could put it up on her Instagram account. A small fillip and then the flatness comes and  I think what it is all for. 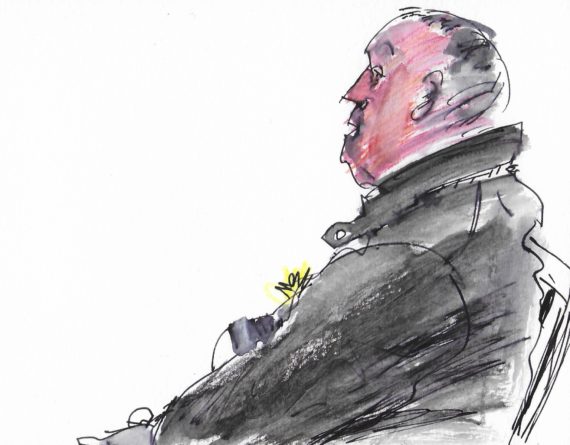 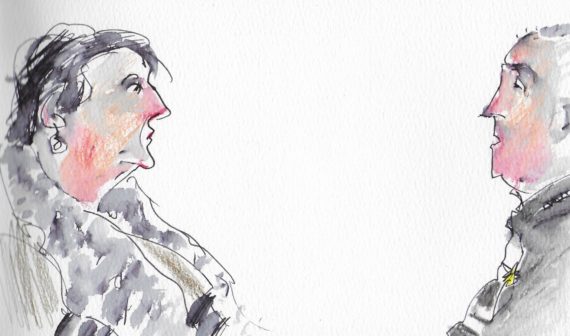 I may not get the grant after my second submission and then what? Meanwhile, I’m amassing a great stock of sketchbooks – what for? Posterity? And then, comes a gift. 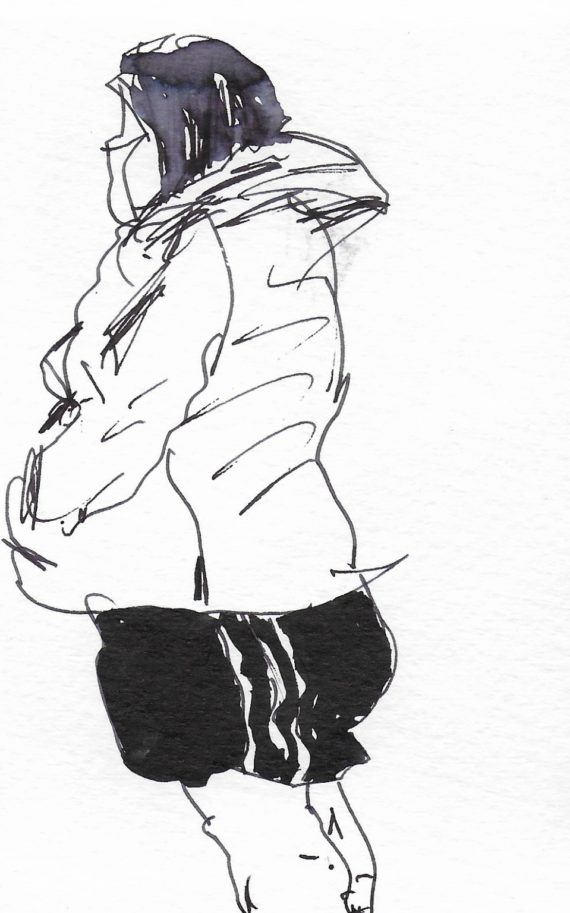 Unbeknown to me, she’d been observing me from the queue. And the next thing she was standing before me. ‘I’ve been watching you,’ she said,’ and they’re amazing!’ She had her hand on her heart. ‘You’ve made my day!’ she said. Is it enough? It was then. 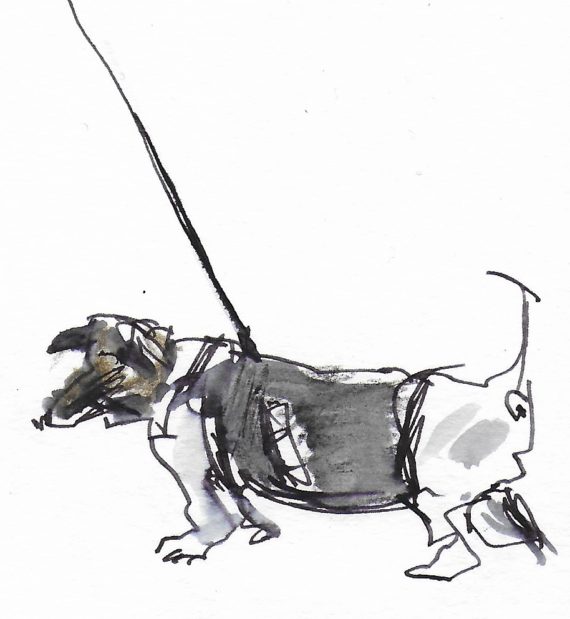