Out of the two designs Davin and I produced during my research trip to Kansas City one was successful. We developed ‘freedomination’ in response to a brief to produce a billboard design that responds to ideas of freedom, set by Red Contemporary Arts in Hull. The billboard series are part of Hull2017’s Creative Communities Programme. The organisers asked: What does freedom mean to you? What does it look like to you? Does freedom really exist? Is freedom allowed to be expressed? Is freedom an understood word? Utopia?

Our design addresses these questions by problematising the notion that freedom is a neutral or intrinsically good thing. We ask: whose freedom? Are we all equally free?

To accompany the billboard we proposed a performance that underpins the ideas behind the design. The participatory ‘soapbox’ performance encouraged members of the audience to get on a soapbox and make a speech on any subject. As individuals expressed their freedom of speech it became increasingly difficult to hear what they were saying, demonstrating the concept ‘freedomination’. The soapboxes were also different sizes, suggesting that the benefits of freedom aren’t enjoyed equally. 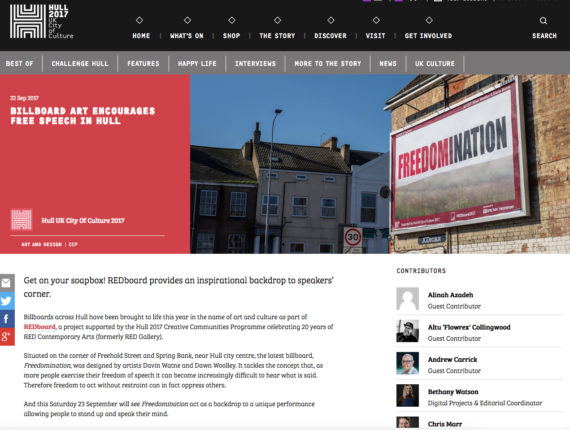 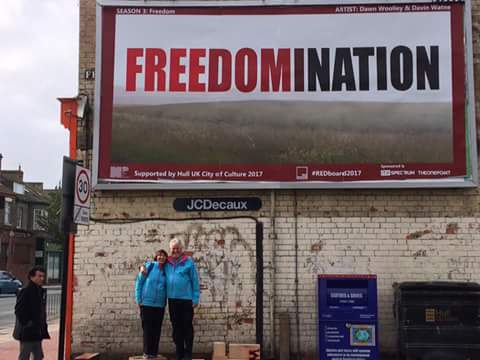 With the help of friends, organisers, and city of culture volunteers we took over a street corner in Hull and turned it into a temporary speaker’s corner. I read a script (manifesto!) written in collaboration with Davin, and then read my own soapbox speech about the colonisation of the public visual realm by commercial advertising. Despite initial reluctance members of the audience got up and shared their views on a wide variety of social issues. The conversations continued long after the performance ended.