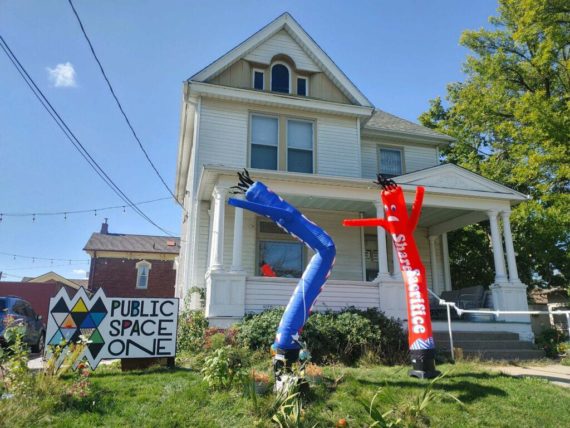 Due to the pandemic, an exhibition of our work at Public Space One in Iowa City had to be postponed. Scheduled to coincide with the run up to the US Election, we had planned to make illusions and installations that draw attention to social and economic inequality in the US, reminding visitors that elections provide them with an opportunity to support or reject the socio-economic policies of the current government. Fortunately, the gallery team offered us the opportunity to present some work outside the gallery, as part of Iowa City Downtown Gallery Walk. We produced a transatlantic zoom performance video and a sculptural installation, both of which are on display outside the gallery until the election.

Iowa City, IA — Public Space One is pleased to announce its October 2020 gallery exhibition, Dancing For Good, by Hard Stop (a transatlantic art duo composed of Davin Watne & Dawn Woolley). The exhibition will run from Oct. 2 through Nov. 3 (and the US election), on site at Public Space One (229 N. Gilbert St. Iowa City, IA).

The exhibition comprises two pieces. The most noticeable: 2 Inflatable Air-dancers, 2020, are located on the front lawn of the PS1 house and will be hard to miss. Air-dancers assume the form of the popular promotional tool for retail outlets, comically flapping around to draw the attention of passersby and beckon them towards the products or services that they promote. These Air-dancers are emblazoned with a national call to work together and turn the page on a difficult time. They flap pathetically, yet with hope, outside the gallery, creating a conflicting feeling of political possibility and potential absurdity.

Exercise Your Rights is a two-channel video installation (22min) that will play on loop in the gallery window (accessible outside, during gallery hours, from the front porch of PS1). This work is a tongue-in-cheek exercise video demonstrating a series of exercises dutifully carried out over a Zoom call between the UK and the US, to “evoke a positive experience in electoral democracy.”

Sun 1-3pLivestream (virtual reception): A closing reception and interview via Instagram live with the artists toward the end of Oct. Date and time TBA. Check the PS1 website (publicspaceone.com) or Instagram (@p_s_won) for updates. 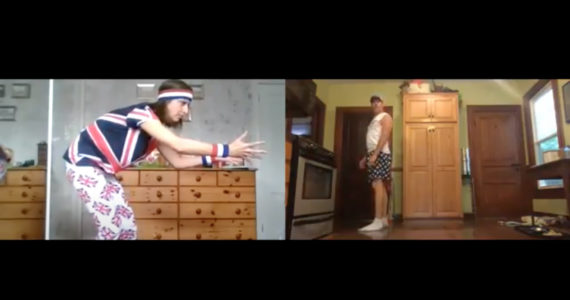 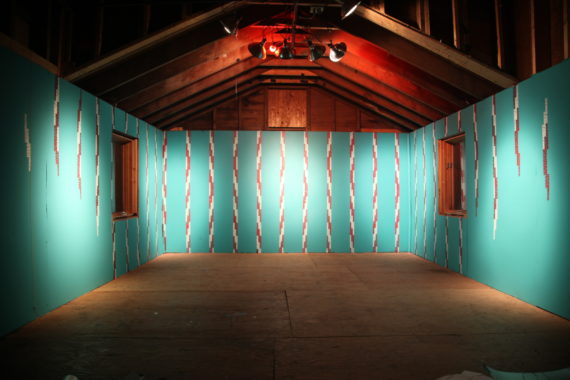 In December I joined Davin on a residency at Wassaic Project in Wassaic, a small Hamlet upstate in New York. Wassaic Project comprises two sites for studios and project spaces in a disused mill and a disused auction mart, and a number of residential buildings that house artists all year round. Davin and I had been experimenting with optical illusions and how they could be employed as metaphors for media distortions and political biases. 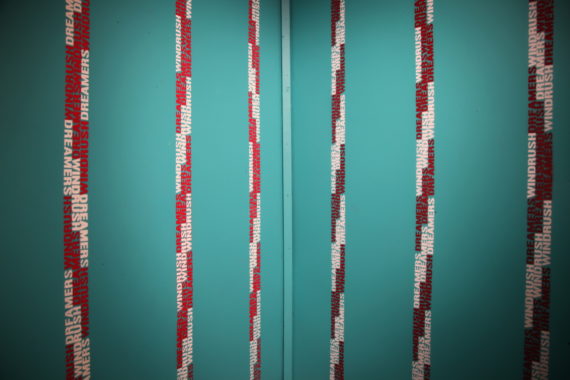 The text refers to the “Windrush” and “Dreamers” communities in the UK and the US respectively, whose citizenship has been under threat of revocation by current ruling governments.

The use of optical illusions demonstrates the fugitive nature of truth, by aligning the inherent biases in human visual perception with implicit social, political and racial biases in our news media.

The text is installed to replicate a visual distortion illusion in which the segments of different colour text trigger a visual stimulus that is misinterpreted by the brain, leading to the perception that the columns of text and curved.The illusion a of crooked line signifies a broken promise to the Windrush and Dreamers communities.

The residency offered us the opportunity to produce a large scale optical illusion installation and test how well the illusions translate from the page / screen to the wall.

We were extremely please with the outcome, which spanned three walls of a room in the mill, and received very positive feedback during an open studio event on Saturday 15th December. The installation was also included in a group exhibition of residents the following weekend. 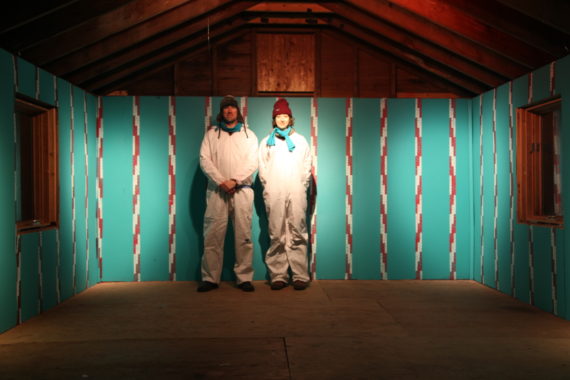 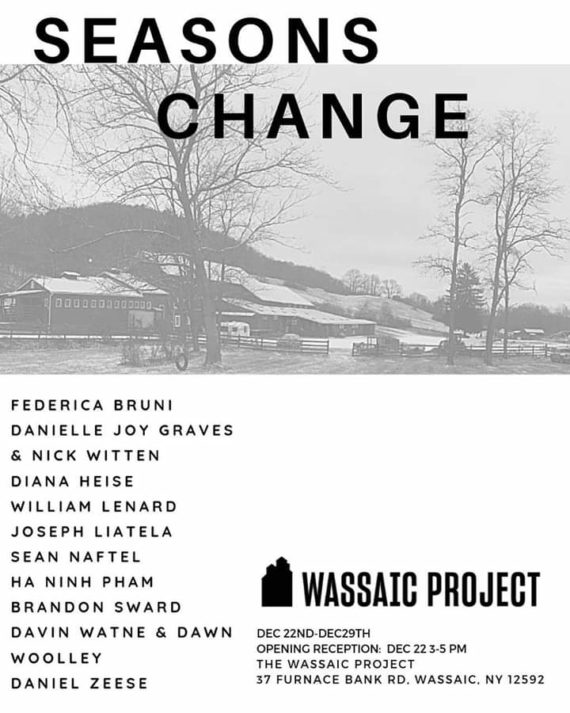 The residency and installation were produced with the support of Leeds Arts University and the University of Missouri, Kansas City. 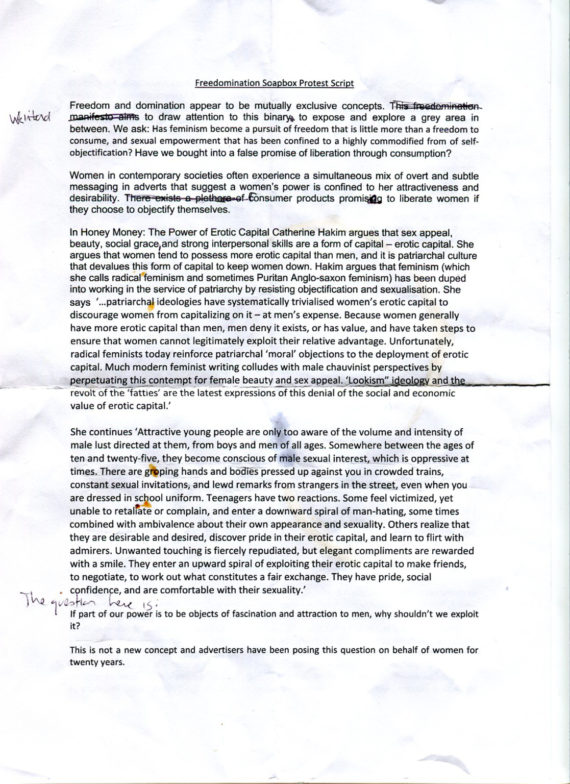 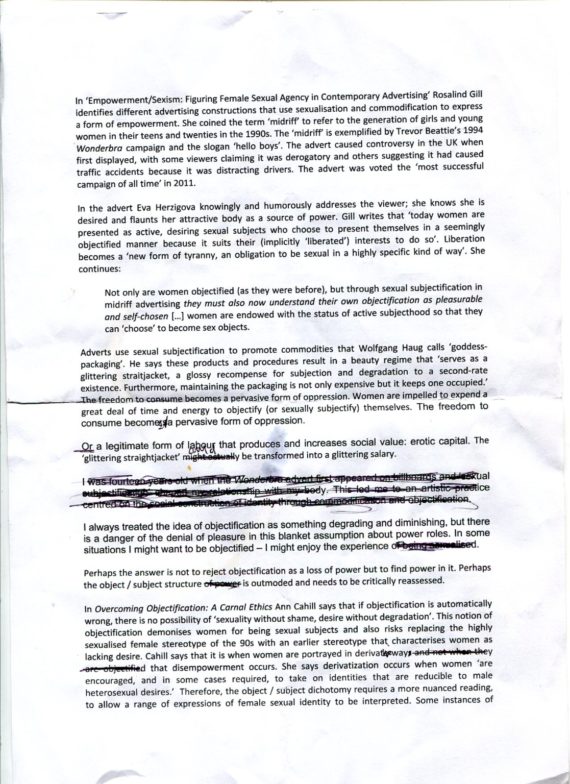 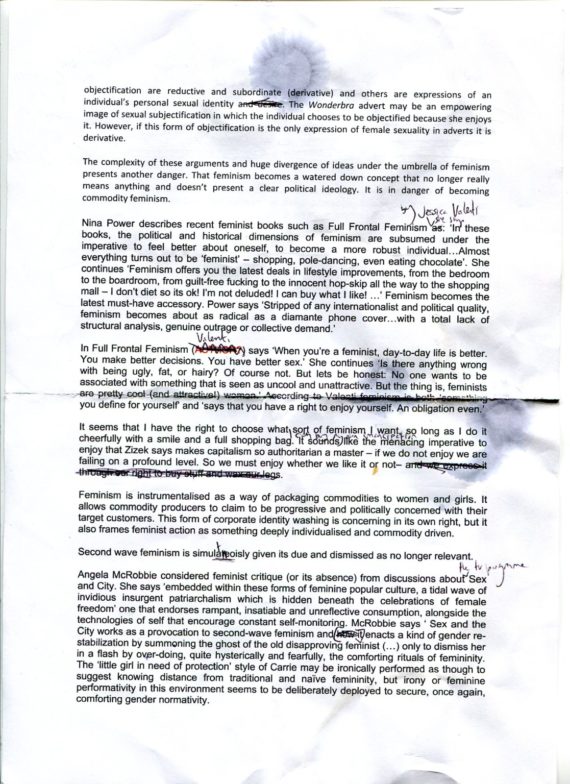 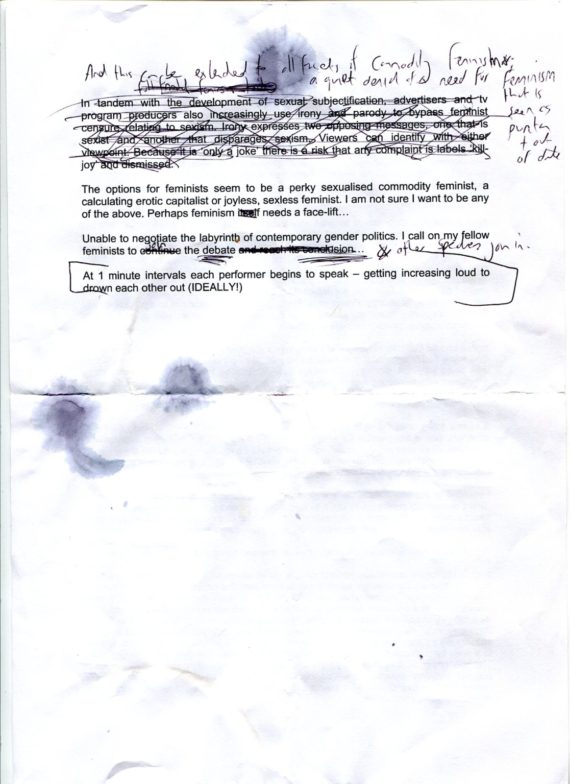 Set up like an unruly debate, the performance will ask: has feminism become a pursuit of freedom that is little more than a freedom to consume, and sexual empowerment that has been confined to a highly commodified from of self-objectification?

In ‘Empowerment/Sexism: Figuring Female Sexual Agency in Contemporary Advertising’ Rosalind Gill identifies different advertising constructions that use sexualisation and commodification to express a form of empowerment. She coined the term ‘midriff’ to refer to the generation of girls and young women in their teens and twenties in the 1990s. The ‘midriff’ is exemplified by Trevor Beattie’s 1994 Wonderbra campaign and the slogan ‘hello boys’. The advert caused controversy in the UK when first displayed, with some viewers claiming it was derogatory and others suggesting it had caused traffic accidents because it was distracting drivers. The advert was voted the ‘most successful campaign of all time’ in 2011 (http://www.campaignlive.co.uk/article/hello-boys-voted-greatest-poster-ever-created/1063405#).

In the advert Eva Herzigova knowingly and humorously addresses the viewer; she knows she is desired and flaunts her attractive body as a source of power. Gill writes that ‘today women are presented as active, desiring sexual subjects who choose to present themselves in a seemingly objectified manner because it suits their (implicitly ‘liberated’) interests to do so’. Liberation becomes a ‘new form of tyranny, an obligation to be sexual in a highly specific kind of way’. She continues: ‘Not only are women objectified (as they were before), but through sexual subjectification in midriff advertising they must also now understand their own objectification as pleasurable and self-chosen […] women are endowed with the status of active subjecthood so that they can ‘choose’ to become sex objects’.

Adverts use sexual subjectification to promote commodities that Wolfgang Haug, a Marxist theorist who coined the term commodity aestheticism, calls ‘goddess-packaging’. He says these products and procedures result in a beauty regime that ‘serves as a glittering straitjacket, a glossy recompense for subjection and degradation to a second-rate existence. Furthermore, maintaining the packaging is not only expensive but it keeps one occupied.’ (Critique of Commodity Aesthetics: Appearance, Sexuality and Advertising in Capitalist Society, Social and Political Theory 1972). The freedom to consume becomes a pervasive form of oppression. Women are impelled to expend a great deal of time and energy to objectify (or sexually subjectify) themselves.

Other feminists argue that the object / subject structure of power is outmoded and needs to be critically reassessed. In Overcoming Objectification: A Carnal Ethics Ann Cahill says that if objectification is automatically wrong, there is no possibility of ‘sexuality without shame, desire without degradation’. This notion of objectification demonises women for being sexual subjects and also risks replacing the highly sexualised female stereotype of the 90s with an earlier stereotype that characterises women as lacking desire. Cahill says that it is when women are ‘derivatized’ and not when they are objectified that disempowerment occurs. She says derivatization occurs when women ‘are encouraged, and in some cases required, to take on identities that are reducible to male heterosexual desires.’  Therefore, the object / subject dichotomy requires a more nuanced reading, to allow a range of expressions of female sexual identity to be interpreted. Some instances of objectification are reductive and subordinate (derivatized) and others are expressions of an individual’s personal sexual identity and desire. The Wonderbra advert may be an empowering image of sexual subjectification in which the individual chooses to be objectified because she enjoys it. However, if this form of objectification is the only expression of female sexuality in adverts it is derivative.
To expose the complexities of this debate performers will be asked to pick a side. Beginning with extracts from One Dimensional Women by Nina Power and Honey Money: The Power of Erotic Capital by Catherine Hakim they will be asked to present their own argument for or against the freedom of objectification and the power to consume. 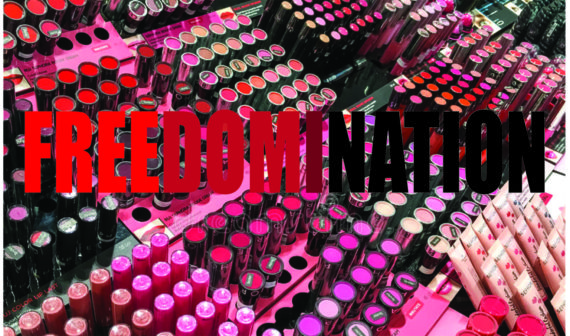 Watne and Woolley would like to recruit performers to respond to extracts of feminist texts and the concept of freedomination. If you are interested in participating in the performance, please contact [email protected], identifying if you would like to speak for or against the empowering potential of objectification and commodification.

Freedom and domination appear to be mutually exclusive concepts. The soapbox protest performance aims to draw attention to this binary, through the concepts of objectification and empowerment, and propose to expose and explore a grey area in between.

Women in contemporary societies often experience a simultaneous mix of overt and subtle messaging in adverts that suggest a women’s power is confined to her attractiveness and desirability. There exists a plethora of consumer products promising to liberate women if they choose to objectify themselves. Freedomination recognises this paradox and seeks to expose it through dialog. Building on the success of their first collaboration in Hull, where Watne and Woolley presented a ‘Freedomination’ billboard and accompanying performance about freedom of speech, they will mark the suffragette centenary by exploring women’s promise of liberation through consumption.

The performance will turn part of the gallery into a temporary speaker’s corner or debating chamber. Performers on either side of the mezzanine will argue for and against the empowering potential of objectification and commodification. As individuals express their freedom of speech it will become increasingly difficult to hear what is said, demonstrating the concept ‘Freedomination’.

For more information about Hard Stop, the collaboration between Watne and Woolley, please visit;