After my meeting and group crit with my class on the 29/01/21, I decided to use new content in for the projection as said previously the film wasn’t working due to the change in colour, lighting when I walk – unclear visual. I tried the projection in the day time too as this was a comment made by Jane to how it would look with regards to most peers work possibly being in day light. It looked very flat and dull it wasn’t what I wanted to work with. See below, natural light made it much harder to work with than the darkness, light would bounce off the breasts making it impossible to film. 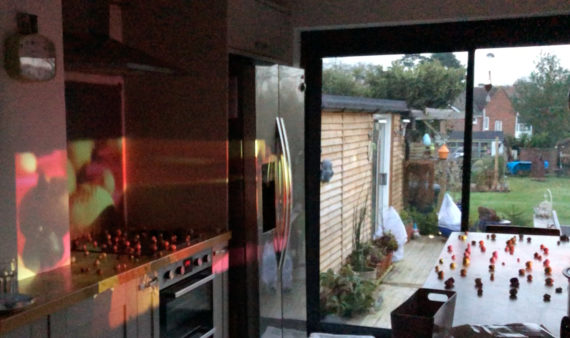 I reverted back to my original pink imagery to use in the projection. I filmed sticking to the actions that worked well from the groups opinion, outside lamp off, hallway lights on, kitchen lights on when you approach, and kitchen lights off when you enter, a slow walk round to the top of the projector and then capture the rest of the work, see below. I really enjoy the beginning of this film, it allows you to see what’s underneath the darkness of the projection. 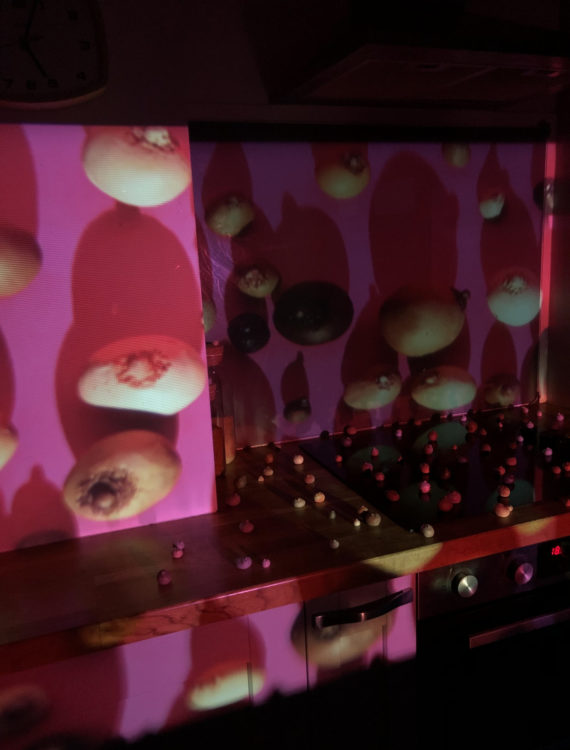 I had a group crit 29/01/21 on the newest film getting feedback on the filming of the film, as well as the content/meaning etc as they haven’t been discussed as a group. See images below of my notes from this crit. This really helped as I learnt that my work is being perceived as I hoped to make it. One peer mentioned it looks as though it’s a cinema/theatre stage which is what I had in when creating.

The colours in the still are much more impactful, bright and captivating. A peer said the colours look feminine and soft, Reflection: 01/02/21: This comment reminds me of Rachel Maclean’s Make Me Up, she displays women as pretty and ideal figures to begin with, but further into the film, it becomes dark and disturbing when exploring to the audience, the way women feel and what they go through. There’s this correlation with my projection, being bright and colour yet contrasted situ of a dark room. Another peer highlighted that the projection stretched across the island reminded them of a stain glass window, see still below. There’s something beautiful about this and the bursts colour into the kitchen, contrasted with the darkness that surrounds. 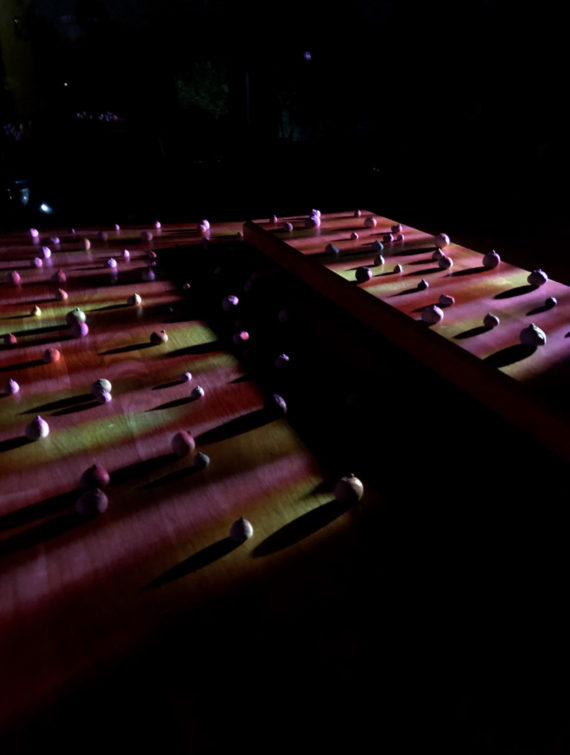 Entering the space was very successful, the house felt ‘homey’ and ‘familiar’, the lights on in the kitchen works well, when the lights were off all together, there was a lot to take in/figure out in e.g. projection and what is on the island. Yet when the lights go off you are drawn to the projection/space more with close up filming/photography it will show a real perception of the breasts. The walkway into the house was a good speed. Reflection 01/02/21: This is what I included further in the editing of the film. Showing a better view of the clay breasts as at first you cannot see what they are as Jane pointed out to me, those seeing this film wouldn’t have seen my work before, therefore not knowing what it is I make/work with – something I have to remember.

The display of the breasts scattered and look like ‘cast aside marbles’, they work well with the imagery of women being put to one side e.g. with no importance and/or appearing like objects which can be handled and sexually objectified by male. I think this works so well with the display of my work, it makes you feel you cannot look away. This is what I want to include in the editing of my film. There’s the comment of the breasts appear like they’re ‘climbing/growing up the walls’ this immediately reminded me of Eggs to Breasts. Reflection 01/02/21: I originally wanted to stick the breasts to the cabinets and walls as though they are growing over the kitchen, like Eggs to Breasts. I like that with the projection, there is already this acknowledgment, it was something I did without realising. See below, it looks as though they could actually be on the walls.

There seems to be this circling back to physical desirable objects e.g. icing. In my crit it was mentioned that the breasts appeared as ‘icing cake toppers’ due to the bite size of the breasts. Consuming 2 in L5 was a very successful film for me as the breast was physically being eaten by a male, suggesting how women are consumed by society and men. I like that without the film, there is still this correlation to this meaning and that the breasts themselves carry the imagery of treat like objects even though they’re made out of clay, like how women and their bodies/breasts are seen. Reflection 06/04/21: It was this comment that has made me want to revisit Consuming but recreate it in Sweet Tooth B&W, to highlight that I have acknowledged this repetition of women as consumption and it’s proving most effective in my practice.

The connotations of the kitchen space/theatre stage/clay breasts, see below, suggests women watching themselves in this continual loop of patriarchy, as I am inviting the audience to acknowledge this, similarly to the way Kruger works with her collages and her communication with the audience/viewer. 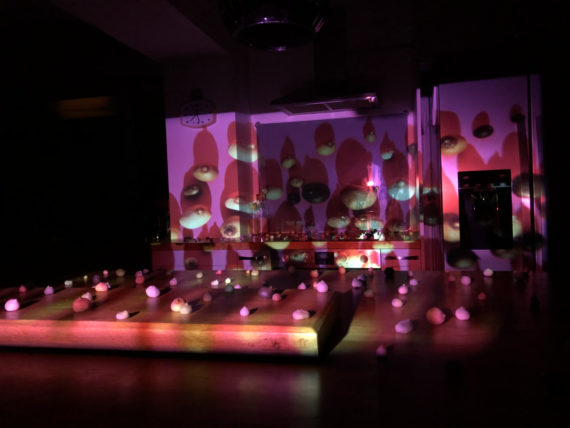 In this crit, we discussed the way I had filmed the film, like everyone else, I assumed it must be filmed with one take, as an actual walkway. It was described as ‘harmonious’. Reflection 01/02/21: I took this forward when filming more of the work as I liked the harmonious element.

Reflection 18/04/21: Interesting to note that there is no sign of harmonious-ness within my current practice now while working with Sweet Tooth B&W, it’s aggressive and violent as matt suggested in my 1-1.

Instead, we are going to split up the film and include short takes, long takes of movement, images etc and piece them together to give a more in-depth overview – makes much more sense/works much better allowing you to focus in on details and the placement of the environment, while including images that may appear better than the film.

Reflection 12/02/21: The breaking up of film and images appear more attractive. It makes you want to watch as to what could come up next, instead of watching a flow moving camera go across the projection could’ve become tedious. It’s been very fun to edit and is working well as a group as it all follows similar film cutting techniques.