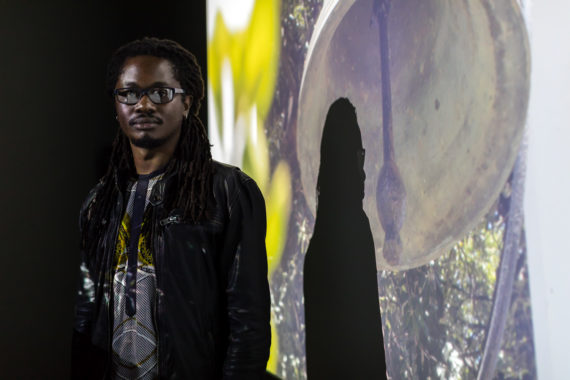 Larry Achiampong wants to talk to you. More accurately, perhaps, Larry Achiampong wants you to talk. Discussing his Pan African Flag For The Relic Travellers’ Alliance – an applique flag hoisted above Somerset House in London for six months to the end of January 2018 – he says: “Whether it’s about the elephant in the room, or to expand on a set of ideas that I’ve been thinking about… all that I really want is for a conversation to happen.”

And what rich subject matter Achiampong lays before us, from the music his mother gave him, through photographic montage, to hacked digital landscapes, this 34-year-old British-Ghanaian artist has, since his days as a postgraduate student at Slade School of Fine Art, revealed himself through his work.

Alongside work by Mark Essen and Nicola Singh, a second Pan African Flag For The Relic Travellers’ Alliance is installed at the Jerwood Space as part of 3-Phase, a development initiative run by the Jerwood Charitable Foundation. Together with Achiampong’s film, Relic 0, this new work combines themes of identity politics, racial stereotyping, post-colonialism, and the acceptance of digital spaces as real locations that people negotiate daily.

The flag, which is hung in opposition to the projected film, combines multiple symbols of the pan-African experience; a black star for each of the 54 African nations, a field of red representing centuries of bloodshed, and a golden sky signifying a prosperous new dawn. A single black figure in the centre of the flag represents the movement of people, through displacement and mass immigration, that has characterised the continent since the dawn of humanity.

Achiampong and his four siblings were born and raised in East London by his Ghanaian mother, a fact that he regularly refers to when asked to talk about his work. He speaks about how, throughout his childhood, he became aware of things being somehow not quite right, as he explained to FAD Magazine in 2013: “We ate a lot of Robertson’s marmalade as kids. I always found the experience of looking at the Golly character, which was part of their branding, strange. It looked so alien. Why would this kind of image exist? Over the years I put the pieces together.”

This experience directly influenced Lemme Skool U (2007), a photographic montage featuring a young Achiampong from his school years up to his graduation picture. In each photograph, his face has been replaced by a black circle whose only feature is an illustrated pair of exaggerated, cartoon-like bright red lips. The image is as reductive a representation of black identity as one can imagine. Simpler than an emoji, it reflects a colonial-era stereotype that, although no longer openly portrayed in polite society, has drifted back to the surface as part of the post 9/11 swing to the right in Western politics. Achiampong wants us to know that not much has changed. “A lot of this derogatory stuff is still in the air,” he says. “It’s there in the art world, too.” Which might explain why he performed a physical version of this piece in Tate Modern in 2013. 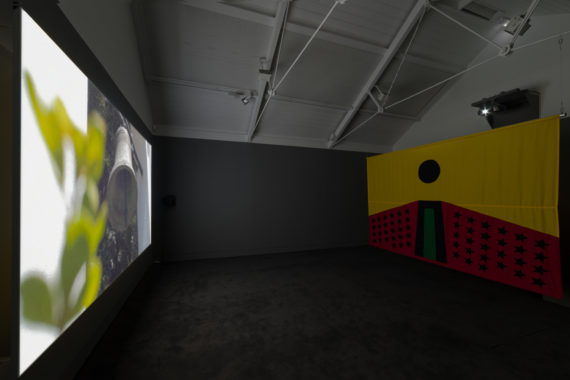 Achiampong’s selection for 3-Phase follows several collaborative projects with well-established artist David Blandy – a union born out of a mutual love of “video games, comics, and hip-hop” as Achiampong said in discussion with Blandy and curator Ben Borthwick at the opening of their film Finding Fanon, at Plymouth Arts Centre earlier this year. That the Plymouth exhibition followed Achiampong’s selection as one of Britain’s representatives at the inaugural Diaspora Pavilion at the 2017 Venice Biennale is demonstrative of the increasingly high regard in which he is held by his peers.

As much as Achiampong wants to talk about identity politics and everything that goes with it, he also wants to discuss the human experience. In mining his personal archive for material, he has unearthed a multitude of cross-cultural reference points to which anyone from his and subsequent generations can relate. His ongoing collaboration with Blandy may at first seem an unlikely fit, but despite the differences in their upbringings – Achiampong is black and working class, Blandy is white, middle-class, and privately educated, to boot – their backgrounds include many shared experiences. Their childhood and early adult years straddle the periods pre- and post-internet; Achiampong talks about “growing up an age in which digital and technological frameworks were becoming more central to the way we live our lives”. Together, they have created works based on the vast digital landscapes found in video games. By hacking into the framework of games such as Grand Theft Auto 5 they can take a character on a journey away from the narrative of gameplay and into its surrounding landscape, as they did for FF Gaiden (2016), to which they also added an original score and audio recorded from volunteers discussing contemporary identity and selfhood in the digital age.

Relic 0 retains the video game aesthetic of FF Gaiden, only this time the footage is of IRL (In Real Life) locations. A spoken soundtrack lays down advice for a yet to be formed Relic Travellers’ Alliance, and talks about location and expectation in light of globalisation and what we know about empire, and the recording of history. This is Achiampong maturing, hitting his stride as he deals with the same issues he’s always dealt with, still “digging into that which most people find uncomfortable”. Instead of donning the face of a golly he has taken a more poetic turn, and while his work was always considered, it is now less confrontational, though no less sincere. The consistency of his message speaks for itself, and Achiampong’s response to a question from Borthwick on that very topic helps to explain why: “If you hold back you begin to think tactically, and that leads to a lack of authenticity.”