At the third writer workshop led by Frieze deputy editor Amy Sherlock, the participants were asked to file a 600-word of one of the two current exhibitions at Ikon Gallery, Birmingham.

This is Carrie Foulkes’ review Edmund Clark’s ‘In Place of Hate’. 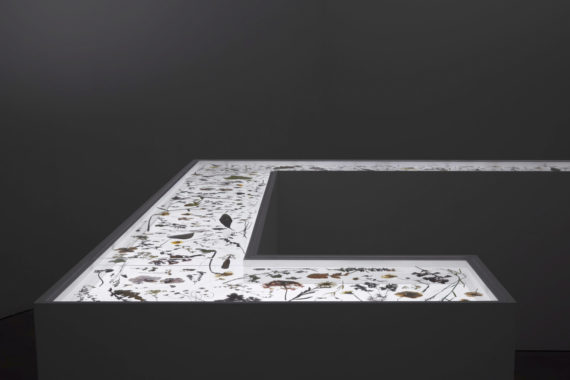 In this haunting exhibition, Edmund Clark continues his ongoing investigation into the world of incarceration and its effects via a multidisciplinary presentation of new work spanning photography, moving image and installation. Drawing on Clark’s three years as an artist-in-residence at HMP Grendon, Europe’s only fully therapeutic prison community, it directly and profoundly engages with its topic while demonstrating an impressive creative range.

In Oresteia (all works 2017) a circle of chairs is arranged in a small ring echoing a group therapy discussion. Three of the chairs are occupied by television sets showing documentation of a psychodrama session. Members of staff perform the characters of Aeschylus’s Oresteia and the inmates, all masked, respond to the play’s themes of power, control, betrayal, innocence, revenge and murder in the context of their own narratives. The masks serve the dual purpose of concealing the identities of the men, as per Ministry of Justice requirements, while also remaining true to the spirit of Greek tragedy.

Two diagrams borrowed from the prison, ‘Personality Development Pathways’ and ‘Therapeutic Community Model of Change’, are also displayed in this room. The former diagram portrays a limited world of predictable pathways through life, evoking the confining warren of both personal trauma and prison architecture. However, the diagram and the exhibition as a whole suggest that while life may leave its scars, there are opportunities to change direction. This is what the Grendon regime hopes to achieve with the men incarcerated there, and the artworks on view provide a compelling insight into the process.

Vanishing Point, a video installation comprising five screens in a darkened room, traces the claustrophobic limits of the prison – its perimeter and narrow inner hallways. This concern with physical demarcations is also apparent in 1.98m2 – a powerful installation consisting of a waist-high lightbox sculpture. This hollow square with an entrance corresponds to the floor plan of a Grendon cell and when I step inside the piece I feel an embodied sense of the prisoners’ confinement. Pressed flowers and leaves from the prison grounds are displayed between sheets of Perspex on the lightbox, making visible their flaws and imperfections. I can’t help but think that the prison environment itself must be like a lightbox, in which the privacy of an unexamined inner life is unthinkable.

The pressed flowers from this first room reappear as images in the final installation, My Shadow’s Reflection, alternating with pictures of prison architecture and pinhole camera photographs of the inmates projected on to green prison-issue bedsheets. Clark’s use of pinhole camera photography enabled him to engage the prisoners as participants in the making of their own image. The portraits were made in a group context, with each man responding to questions from Clark and other inmates during the course of a six-minute exposure, resulting in blurry, ghostlike images.

These nebulous headshots suggest individuals in the process of evolution. The lack of identifying detail protects the anonymity of inmates, ostensibly for their own wellbeing. But this facelessness could also be viewed as dehumanizing. These contrasting readings – anonymity as liberation or oppression – are evident in the men’s vastly varying responses to their own portraits, as documented in the exhibition catalogue: “There is nothing in this photograph to identify me as a prisoner. I’d like them to see the essence, the spirit, the warm energy inside me”; “It’s someone who is stripped of their identity and lost in the cogs of the system.”

‘In Place of Hate’ raises uncomfortable questions about representation, voyeurism and power, but any disquiet is alleviated by Clark’s sensitivity and openness to the men’s own interpretations – the inmates’ voices in the catalogue return agency to the artist’s subjects and provide a well-judged counterbalance to this memorable body of work.