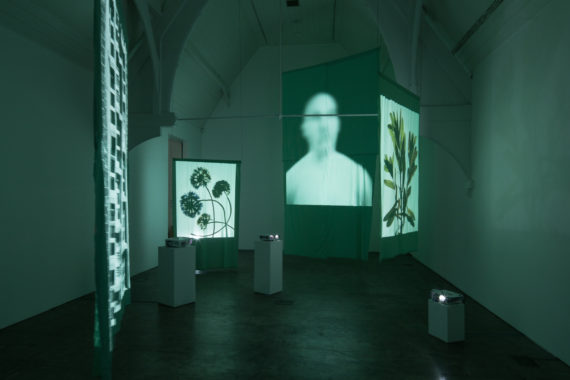 Oscar Wilde pressed flowers he found in the grounds of Reading Gaol to remind him of the pleasures of life beyond the jail walls. The result of a three-year residency at Europe’s only therapeutic prison, HMP Grendon, Edmund Clark’s ‘In Place of Hate’ draws inspiration from Wilde with a waist-high lightbox, the dimensions of a prison cell, scattered with pressed flowers. 1.98㎡ (2017) evokes a meadow where daisies, pansies and dandelions stir on a soft spring breeze; floral accompaniments to an idyll where the salt of the earth frolic. Left supine, these stunted flowers have become specimens, so we may trace the weakness of their veins and pick over their blemishes.

Since the 19th century the mugshot has been associated with criminality and is an enduring feature of modern justice systems. At HMP Grendon photography features as an important tool for rehabilitation, as well as a bureaucratic function to document prisoners. In group therapy, inmates are confronted with photographs of their victims and the scene of the offence. A former prison psychotherapist describes the reaction of inmates when confronted with these images as “unbearable” when “the horror of what they had done is mirrored back to the self”. Clark explores this reconciliation in My Shadow’s Reflection (2017). Grendon’s inmates and staff were asked to pose in front of a pinhole camera as they spoke about their past, present and future identities. The resulting long exposures smudge Grendon’s community into a series of murky auras.

The nebulous portraits offer richer representations than the precision of the traditional mugshot. One inmate remarked that his portrait gave him the appearance of being covered in mud, a layer to be scrubbed off so he could be reintroduced into society as “someone who is trusted”. In a darkened section of the gallery, the portraits are projected onto prison bed sheets next to sharp photographs of flower cuttings taken from Grendon’s grounds. Interpretations change and power dynamics shift; murderer, rapist or abuser cannot be attached to the men’s indistinct features, as they are blurred alongside the prison staff. Aligning prisoners with staff on the draped bed sheets implies anyone has the potential to be on either side of the prison perimeter. The focus afforded the plant cuttings shifts attention away from the pinhole portraits, forcing the prison community to recede. It is a literal interpretation but it is hard not to draw comparisons between these curtailed flowers and the victims of the prisoners’ crimes.

These ghostly shrouds are disrupted by the only brightly-lit space in the exhibition, where chairs from the prison are arranged in a circle for group therapy. On three of the chairs TV monitors play a performance of the Greek tragedy The Oresteia which Clark orchestrated. The play was chosen for its parallels to the psychodramas staged at Grendon in which staff act as perpetrator, onlooker and victim for the men to identify with. A powerful therapeutic aid, psychodrama is used to re-enact scenes from the lives of the inmates, to highlight connections between their histories and their crimes. Often the men identify as victim and perpetrator, a complex chain of identities flattened by a criminal act. Clark’s Oresteia (2017) gives dimensions to these complicated characters by revealing them as individuals struggling to make sense of their lives.

Given the nature of the crimes, the compassion afforded Grendon’s inmates in ‘In Place of Hate’ could be seen as controversial. Yet reoffending rates are significantly lower than a conventional prison because of the commitment to rehabilitation by both prisoners and staff. Through Oresteia, Clark is making the case that unravelling the shadowy side of the psyche is important for the wellbeing of society as a whole. Indeed, there is an assertion flowing through ‘In Place of Hate’ that life inside and outside the cell walls is not the binary Wilde felt when he pressed flowers to hold onto life beyond jail. This proposition is at odds with a culture that believes removing criminals from the context of society is a just atonement for crime. ‘In Place of Hate’ challenges perceptions of criminal justice and is refreshingly utopian in its call for understanding.