I want to be back in the studio. I want to be ordering materials. I want to be making things. Having slept on them, and cogitated through a couple of days, I’m seriously excited about some of the new concepts. I can’t fulfil them here. I also want to look at the possibilities around very large spaces – temporary, maybe – to install and photograph the works.

The brilliant http://www.marketproject.org.uk/ is holding a public debate Too many artists on 9th November. Here are my suggestions to get the ball rolling:

The ‘panel’ (me) proposes an annual cull, by instigating a variety of systems in order to maximise efficiency.

The first cull will be broadly modelled on an annual art prize. Four nominations will be made as normal, and all nominees – apart from the winner – will be quietly put to sleep as soon as the canapes have been handed out. Of course, all artists over fifty are not eligible in the first place and will have been discreetly disposed of before the event at the rear of the building. Furthermore, unless the winner goes on to significantly develop their oeuvre within (say), three years, he or she will also be ‘tidied away’. This will have taken care of all artists over fifty and, usually, four others.

The second cull will be of PV regulars: using eye-motion-scanning technology, all artist/PV-goers who survey the beer and/or the crowd before they look at the art will be terminated forthwith. Many of these will be found in large herds on the street outside the galleries and therefore easily rounded up. Any artist who looks at the art first will be allowed free passage. Unless they are, or look like, a bit of a twat.

Still on the subject of PVs, all sycophants will be summarily executed.

Limiting the range of environments in which artists proliferate will be beneficial: several promising schemes are already in place (such as the removal of meaningful financial support, in a nutshell). The panel is not overly concerned about the private sector stepping in to fill the void, so no further remedial action is anticipated as things stand. There are other potential targets, however: for example, we propose closing down galleries where the office staff don’t look up from their iMacs when anyone enters the premises. Although this is already widely recognised a form of natural selection, the inevitable should be accelerated wherever possible. It is a form of kindness, after all. Acceptable mitigation will include where it can be demonstrated that the offender immediately tabbed from Facebook to updating the gallery’s website. These are more likely to be unpaid interns in their fifth week in the role of being ‘a family friend popping in to help out on a strictly voluntary basis’.

Also for the chop:

Any artist who sends an extra image for an open submission, in the hope that the judges will make a special dispensation just for them.

Any artist who has upset the general public, irrespective of whether or not any of the latter are able to correctly name the single piece of work they saw in the newspaper.

Any artist who has dissed Tracey and/or Damien, but also paid to get into Frieze.

Anyone who can draw well is dispensable, as is anyone who can’t draw. In a similar vein, all new-media practitioners will be considered suspect, as will exponents of traditional media. If you have more than one type of oil in your studio you should make provisions for your family now.

All artists with a really good statement. Even though there won’t be many of those.

Anyone who ‘does art’ as a hobby. Unfortunately this means that anyone who holds down a different full-time occupation in order to support their art practice will also be terminated. Rules are rules.

Any artist who sports an ostentatious moustache.

Any artist who uses the word ‘palimpsest’ in conversation.

Those remaining will be tested on their ability to complete a risk assessment form. The panel is still in heated discussions as to whether the ability or the inability to successfully complete any paperwork of this nature should constitute the reason that the individual concerned should be euthanised.

I just stumbled across this article about the importance of an online presence. It is aimed at journalists, but there are several useful tips which also directly apply to artists, and a few which can be adapted.

The first tip – Make sure you can be found online – is particularly true, especially if you don’t have an unusual surname. To paraphrase it: “I reckon every (artist) needs to be found when someone types in their name and the word (artist).” Just as an experiment, I typed in “John Smith” and turned up over 21 million results in Google, whereas “john smith sculptor” produced just 4.

I have been getting most of my news from Twitter and Facebook. I can’t access ordinary BBC News because I am outside of the UK. The radio speaks in repeated soundbites. The same old talking heads spout off. I found a couple of news sites, but they re-cycle the same stuff, and due to a combination of demand and internet speeds I get half a dozen words then a turning wheel. I have been struck by a few things; social media has informed me to some extent, but it has also played a huge part in gathering people together (on both sides of the fence, as it turns out, such as the clean up campaign); strongest, though, is that I have been given a small insight into how information (and misinformation) can be controlled and disseminated in certain other countries, and the role of social media. 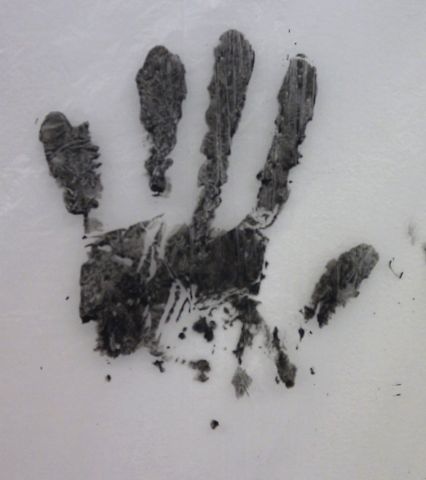 I get a little defensive when people hear about the place in France and assume that I am rich. It couldn’t be further from the truth. Being an artist does make it possible, though. In a prime example of perverse logic, as an artist I can just as easily not earn money here as I can not earn money in the studio.

The way it works is this: I work on the building during the day, and on my practice in the evening. I don’t have quite the same distractions, so I can concentrate. Until recently I haven’t been able to create finished works (although I have made what I think are some of my best works here) – I work on ideas which I then take back to the studio in England.

The place was bought as a ruin, with no water or electricity, so it was cheap. Again, because of money, I have done most of the work single-handed. I’m lucky in that either I already know how to do a lot of the work, or I have learnt on the job. I have just been slating the roof.

This is my pension, in effect. I don’t know what else artists are supposed to do.

I hoard ideas that interest me for reasons which may be elusive, like a face that seems familiar but which I can't quite place. My practice is an exploration of these ideas.