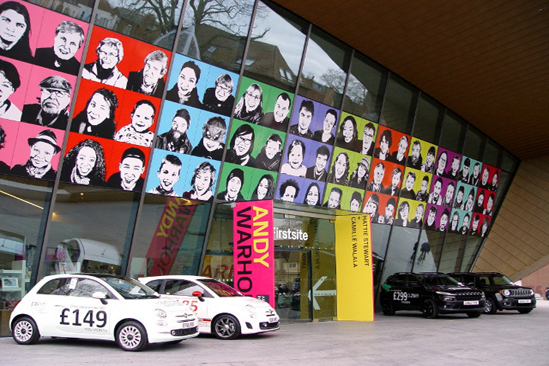 I was keen to see the content of the Warhol exhibition at Colchester’s Firstsite Gallery last weekend.

Because of its capacity to repeat, standardize and mass produce identical, relatively inexpensive objects, the role of the machine in the industrial revolution was regarded as the antithesis of art.

So, when Andy Warhol, coming as he did from a background in illustration and design, business and publicity, embraced the art world’s worst nightmare with slogans such as ‘I consume therefore I am’ (an ironic, capitalist twist on Descartes’ ‘Cogito Ego Sum’ or more fully ‘I doubt, therefore I think, therefore I am’ – which was proof to Descartes that he knew he existed), Warhol stood up as a political artist.

He audaciously confronted the threats, perceived by some, posed by machine made, mass produced objects untouched by human hands until they arrived, at speed, on a conveyor belt ready to be packed and shipped off to eager consumers.

With screen prints such as ‘Marilyn Diptych, 1962’ (image of a global icon produced in the year of her death) Warhol exposed a growing fear in some people of the loss of individuality (e.g. reflecting on a Marxist fear of ‘alienation’ which came from living in stratified societies and working in high-tech factories; were tasks were so fragmented that an individual’s involvement led, in some cases, to feelings of estrangement from the end product and the dehumanizing machinery which produced it).

However, Warhol’s screen prints were not precise and therefore not identical. He called his studio ‘The Factory’ and employed assistants but they produced images which, like disfigured stamps which had slipped through quality control, were unique, revealed the infallibility of the maker behind them; and where therefore valued by some and valuable to others. 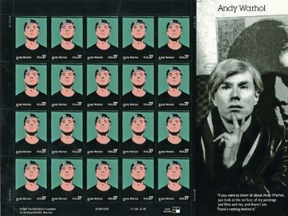 I think Warhol would have been amused to know that in 2002 one of his self-portraits appeared on American stamps.

The themes in Andy Warhol’s work were as prolific and diverse as American culture itself: death, consumerism, capital punishment, guns, money, cultural icons, celebrity status, beauty, media, symbolism etc. His manner of handling these themes is rather like a disassociated TV viewer witnessing a horrific event. 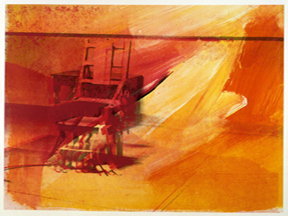 I found this image particularly mesmerising. Out of all the framed screen prints of the electric chair from Warhol’s ‘Death and Disaster’ series early 1960s, this screen print was covered from the left to right edges in wide sweeps of acrylic paint – like blood thrown from a bucket. It contains the most vivid colours and was therefore all the more shocking because the colours and content are strikingly incongruent.

To date, the Firstsite Gallery, Colchester (my home Town) has struggled to survive though under the temporary but passionate Directorship of Anthony Roberts the number of visitors rose significantly.

Sally Shaw who is currently Head of Programme at Modern Art Oxford will take-up the vacant post in April, 2016. This new appointment should see the Gallery flourish. I hope it develops a strong team, puts effort into improving its PR, exhibits excellent art, provides exciting opportunities and welcomes enthusiastic visitors.

On Saturday morning there had been 500 visitors in two hours which is brilliant news! If you live locally, do visit and consider putting Firstsite on your list of Galleries worth visiting and promoting!

Reflecting on the impact of Pop Art on art made me think about the use of digital media and IT in art now. I am an art student and yet my experience of using IT in relation to art is very limited e.g. using social media for self-promotion and professional communication.

Things need to go a lot further than this, and at speed. Staff and students of fine art must have the facilities, technology and software which will enable them to explore the potential applications of IT in art in a university or art school setting.