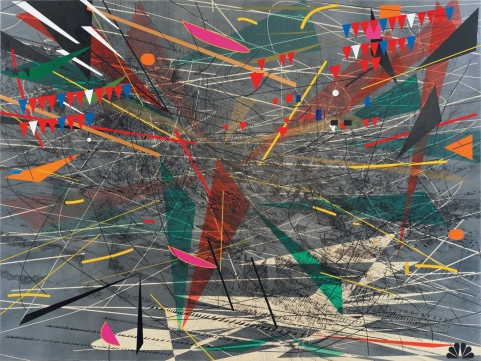 In contrast to Zaha Hadid, for whom architecture was the driving passion and focus of her work, for Julie Mehretu, architecture – and compressed urban environments – are a point of departure for dynamic, explosive forays into her imagination.

The images Mehretu generates are highly complex rational maps. They do not demonstrate the violent aftermath of a destructive nuclear explosion but they do emphasis a ferocious force capable of separating out each and every component of the material world.

Mehretu appears to both reference and blow the boundaries of the dynamism of the Futurists, the geometric abstraction of Malevich and the scale of Abstract Expressionist colour field painting.

Mehretu’s canvases overlay and juxtapose architectural features such as columns, façades and porticoes with geographical schema such as charts, building plans and city maps and architectural renderings.

Mehretu presents her convoluted maps from multiple perspectives – aerial, cross-section and isometric. Her paintings present a vortex of visual events in which gridded cities are flattened and blown apart as though snatched up by a nuclear wind. The fact that the urban spaces are seen as grids rather than sealed blocks as they would appear in a photograph means that we can seen through physical time. See the video link below in which – for Out of Sync Mehretu elaborates on her painting Beloved (Cario), 2013 in their Art in Focus series available on You Tube:

Mehretu’s explorations of time via palimpsests of history – including geological time and a phenomenology of the social – draw us into a dynamic visual articulation of contemporary experience; a depiction of social behavior and the psychogeography of space.

Psychogeography is associated with the European Situationist International (SI) organization of social revolutionaries made up of artists, intellectuals, and political theorists from 1957 to its dissolution in 1972. Guy Debord defined psychogeography in 1955 as “the study of the precise laws and specific effects of the geographical environment, consciously organized or not, on the emotions and behavior of individuals.” (Sadie, 1992, The Most Radical Gesture) 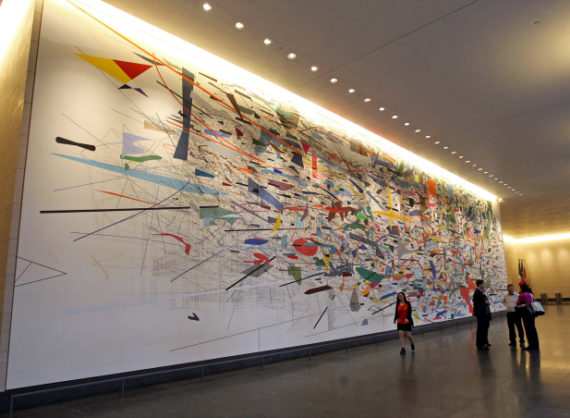 When discussing her work, Mehretu explains her impulse to explore psychogeographies (springing from her movement from Ethiopia – the country of her birth – to her home in New York and all places and periods of time which arrest her political, social and creative imagination):

I am interested in ways to picture or map [civilization] … weaving in and out of functioning, resistance, understanding… I am interested in the potential of ‘psychogeographies’, which suggests that within an invisible and invented creative space the individual can tap a resource of self-determination and resistance… This impulse is a major generating force in my drawing and my larger conceptual project as a painter. (Mehretu, 2003, Drawing into Painting, p. 13 – 14)

I found this statement fascinating as when I reflected on my decision to base my current project on Essex University, I thought about the following ‘psychogeographies’ which have added rich and complex nuances to my work:

Memories and renewed fondness of place – built environment (reinforced by attending lectures celebrating the 50 th anniversary of the earliest buildings – 1965, New Brutalism – the paternoster lift in the distinctive library I love with views over the lake – silence, concentration, intellectual challenge, access to numerous ideas about human life and the world we inhabit and continue to explore and thereby create. The Hex restaurant, the lecture theatre block, the sports hall in which I sat examinations);

Fondness for the landscape – Wivenhoe Park – (in 1816 John Constable was commissioned to paint Wivenhoe Park by his patron Major-General Rebow) – lakes, trees, wildlife – especially the gaggles of geese walking possessively across the landscape a reminder of the Theropod dinosaurs from which they evolved during the Mesozoic Era;

Memories one year course (Continuing Studies) in Psychoanalysis – Feud and Jung – questions about self, socialization, society;

Contemporary architecture – palimpsest and reconfiguration (e.g. Silberrad Building partially blocks the view of the lake from the library; one lake was redesigned and is partially built over; an iconic stairway in the library (nick named “The Cloisters”) was removed to create space for a new vision of the library extension – plans met with huge protest, media coverage and failed application to get the stairwell listed to prevent obliteration); and

Reminders when researching the university buildings that in the 1960s and 80s Essex University was synonymous with radical student protest and that their unrest was associated with the Brutalist architecture of the 1960s in which they lived and studied. 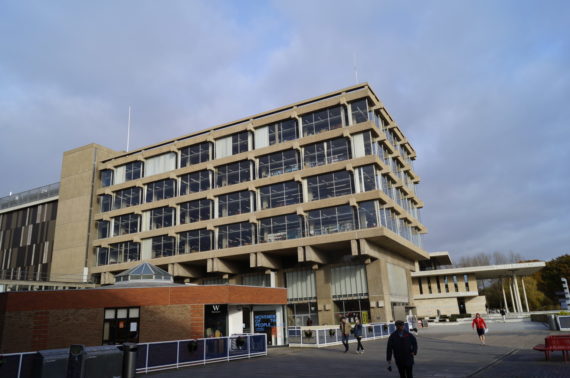 For a discussion of the significance of the architecture of Essex University on the experience of its students between Professor Jules Lubbock and Dr William Whyte, click on the following link: 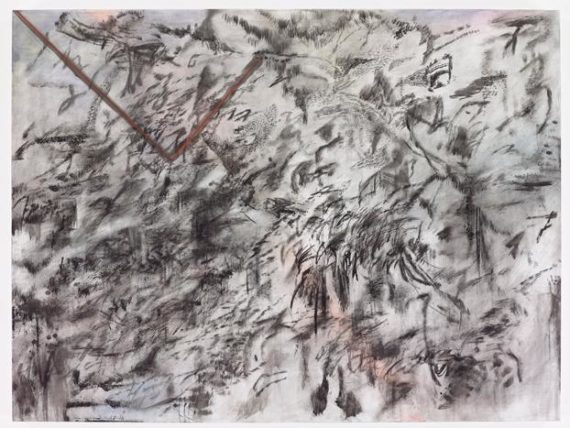 During Mehretu’s elaboration of Beloved (Cairo) , 2013, she explains that the reason she works within the language of abstraction is that there is no clear image of what perspective is; it is more about an in between place which is made manifest when abstract marks overlay architectural drawings (which are presented in multiple perspectives):

Instead of just the architectural language delineating the space, the characters and swarms actually develop and create the space. The architectural language serves as a marker to the type and the history of the space, but the characters make the space and break it down. They actually complicate the space in the painting. For example, a bunch of dashes or marks will enter the painting a certain way and then another group of marks enters it another way to completely contradict that. (Mehretu, interview with Lawrence Chua, Bomb 91, Spring 2005.)

I identify strongly with Mehretu’s experience of mark making as equivalent to creating characters which appear to express their intent as they develop and during the evolution of a drawing. For example, I feel compelled to situate marks of a specific type in areas on the ground where they intend to roam and inhabit; or I have a sense that they insist on being brought from the background to the foreground thereby over writing other marks which gives rise to a new and insistent dialogue between these competing, or co-operative characters, which begin to populate and determine the ground upon which they play out their palimpsestic performance.