North East London. Next to the water and a little way from other buildings, there is a house between the Stoke Newington Reservoirs that has this almost mythic quality, of being out-of-place, of living a life apart from the rest of the city. This glass model is part of a series that celebrates and depicts the otherworldly, mystical aspects of this otherwise ordinary-looking house. 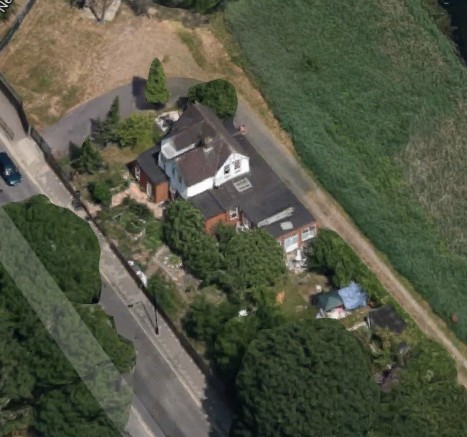 I first read about the house in the Quietus magazine. The band Real Lies lived there and are similarly obsessed by it. For them, in some ways, it’s the last house in London. I’ve come to see it as embodying lots of converging stories – about real estate, regeneration, the mythic idea of inspiration, the cult of youth, topophilia (strong feelings towards a specific place), the disappearance of a certain type of London.

The neighbouring Woodberry Down Estate was a post-war utopia of social housing, schools and public facilities (my mum used to work at the health centre). By the 1990s it had become a wilderness of used needles and rats. The good intentions of the 2006 masterplan – which I worked on in my first job – have since been maligned – part of London’s turbid housing crisis. A 3 bed flat is on sale for £945K.

Glass, able to refract and contain light, captures some of the mythic properties of this house, an accidental site of inspiration and transgression. I suppose the sculptures are like crystal elegies, for memorialising this shrine like lipstick traces of poetic oblivion. Or perhaps like cut-glass perfume phials trying to capture an essence before it disappears. Or even, as fragile vitrines, a preservationist attitude to the way that cities change.

In some parts of London the bohemian era seems to have passed. LORDSHIP is a pellucid idol for pilgrims to worship. All must be thinking: LORDSHIP will be ascending soon.

A series of sculptures based the strange equivalence of architecture of financial districts across the world.

The series examines the idea that today’s tallest towers are more than simply buildings: they represent a belief system that is ubiquitous throughout the world today. These are tribal objects for the Information Age.

These perforated metal sculptures, based on buildings that were once the tallest of their time. The series is based on a flippant idea formulated by economist Andrew Lawrence: “An era’s tallest building rises on the eve of economic downturn”.

For example (click on the images to read the captions):

There’s something primal, almost tribal about towers. The tallest ones have come to represent the financial industry, another weirdly cultish sect, with its arcane scholarship of tax codes and use of obscure devices like algorithms or financial derivatives.

Or as Will Self more bombastically puts it, “A skyscraper is always a big swaying dick vaunting the ambitions of late capitalism to reduce the human individual to the status and the proportions of a submissive worker ant“

But with the Skyscraper Index the mask slips. Decisions are suddenly not as rational and hard-headed as you imagine. Buildings, which are the result of many sophisticated systems (planning, financing, designing, building), are simultaneously a manifestation of risky speculation, this over-exuberant faith in a bubble economy.

The punched metal alludes to electronic hardware or building systems – both familiar and strange, everyday and incomprehensible. CNC machined objects are part of a world of robotics that dystopian sci-fi writers imagine one day taking over the world.

Click here for a video of a CNC punching machine. Isn’t it cool?

But the sculptures also refer to a cultural heritage of esotericism and mystic religion: tribal masks, occult symbols and cosmic diagrams. Like examining a computer and being able to read its notches and incisions like some cryptic hieroglyphic mantra.

The series forms a pantheon that recognises our contemporary idols: framing beliefs in economic progress almost as if they are tribalist rituals; underlining irrational, vestigal and atavistic elements still persistent today.

Watch a video interview about the making of a tower for the front cover of British Airways’ First magazine:

Amanda Lwin is an interdisciplinary conceptual artist whose practice is concerned with urban systems and how they impact on our sense of self, national and global identity. Most recently, projects have attempted to reveal the way that systems and infrastructure underlie our societies and lives: networks that hold cities together but might be invisible or intangible. Initially trained in architecture and urban design (BA Hons Architecture - Cambridge, MArch Urban Design - UCL), since shifting towards contemporary art she has exhibited with commercial and public galleries in the UK and internationally. ---------------------- As an example of her practice, recent projects include: // Capricious Cartography A project resulting in an ongoing series of handwoven textiles that are maps of infrastructural networks. Initially conceived as a way of extricating mapping from its static, authoritarian form into something more shifting and contingent, this has progressed into maps hung as overhead installations in public and semi-public spaces. Most recently commissioned by the City of London, 'A Worldwide Web of Somewheres' is a map of the City’s underground infrastructure. It is currently installed in Leadenhall Market, site of one of the oldest marketplaces in Britain. ----------- ///Unreal Estates A curatorial project bringing together painters and writers to collaborate on the subject of domestic interiors. The project critiques the homogenisation of interiors aesthetics that happens when houses are transformed into tradable assets. Gathered together, the works are a subtle commentary on the state of the property market and the trend of property as investment, rather than a place where lives are lived. ----------- ///The Skyscraper Index Bringing together themes of economics, political power, irrationality and architecture, this project manifests as a series of iridescent metal sculptures drawing on a material language electronic hardware (server cabinets, cable trunking), but also a heritage of esotericism and mystic religion (Aztec breastplates, French tarot cards, Jain cosmologies) – creating objects that are both familiar and strange, everyday and incomprehensible.. ----------- b. London, UK. British of Burmese heritage