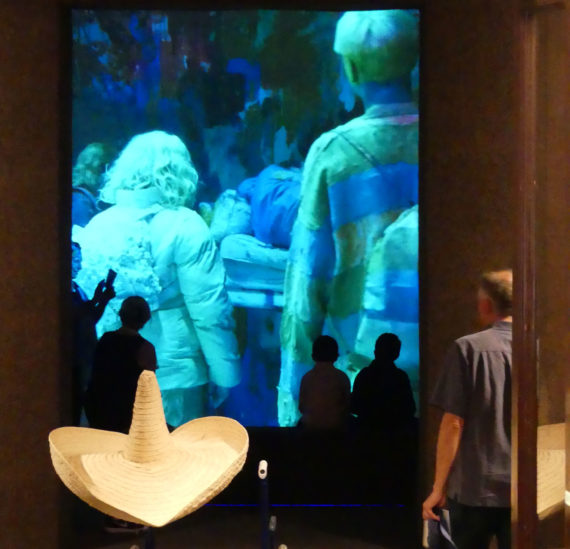 I’d been so engrossed in Oslo, I’d forgotten to tell Elda at Galleri Svalbard when I’d be arriving, but figured that any slightly Wild North place like this would attract people who are problem-solvers and, sure enough, wonderful Elda had simply left the key in the door of my room and a pile of bedding ready for me. I met her the next morning and she lived up to all expectations: friendly, lovely, generous and intelligent; she contacted people on my behalf and provided insider-knowledge of the town. Elda used to run a gallery in Berlin, her work here was slightly different, to put it mildly, but she helped to make me feel at home.

A town of 2000 permanent residents, whose population can triple when one of the giant cruise ships comes in bringing tourists from around the world, Longyearbyen is a strange mix of coalmines, a university (mostly studying the effects of climate change from burning fossil fuels), and shiny shops selling trinkets to tourists. Everyone seems to have 3 jobs, you are not allowed to give birth or die here and if you walk more than 100 metres from the edge of town you need to carry a rifle. 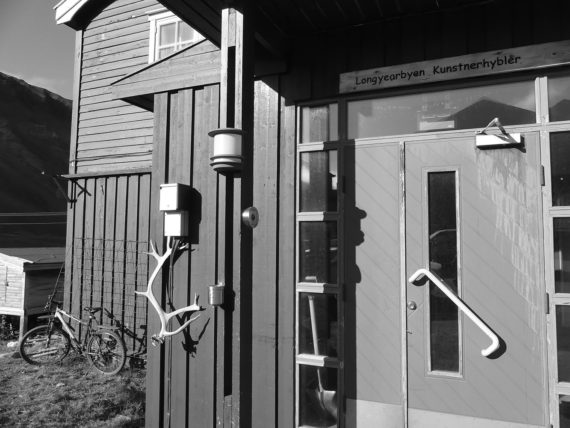 Galleri Svalbard run self-funded residencies, providing accommodation and studios (some of the best value in town in a beautiful shared apartment at the top end of the valley). There is a gallery with a permanent art collection, a library, temporary exhibitions and workspaces for local artists. Make sure you are aware of the safety issues in the Arctic (mainly polar bears) and that travel is very difficult and expensive around Svalbard. Do your research.

I visited Artica Svalbard in the unmarked building next to the Fire Station, fending off attacks by ground-nesting arctic terns, which take over the streets of downtown Longyearbyen each year.  Artica Svalbard ‘intends to promote discussions and thinking about the Arctic and its importance concerning questions of resources, nature, technology, society, culture and geopolitics … both internationally and within the circumpolar region’, and is partnered with OCA, Norwegian PEN, Queen Sonja Print Award, North Norway Art Museum and Kunsthall Svalbard. It’s a brilliant addition to Longyearbyen, which for a tiny town has a vibrant cultural life, with cinema and library, art galleries, workshops and residencies. Along with The University Centre in Svalbard (UNIS), which has world-class scientific research and teaching about the cryosphere, it really feels like Longyearbyen punches above its weight intellectually. Artica Svalbard has collaborated with Polar Permaculture, Galleri Svalbard and the library and it will be interesting to see the outcome of its international residencies. Audhild Dahlstrøm of Artica Svalbard spent 18 years in the UK and loves the ‘let’s just do it’ attitude of the Brits. In contrast to the idea of relying on government subsidies and funding to make art, her philosophy is based on years of working with colleagues who said ‘we never have enough money, but we’ll just do it anyway, because it needs to happen’. I think that’s been my attitude, too, but I’m increasingly worried by the burn-out that seems to happen when people ‘just do it’ for years and still have to feed themselves and their families. 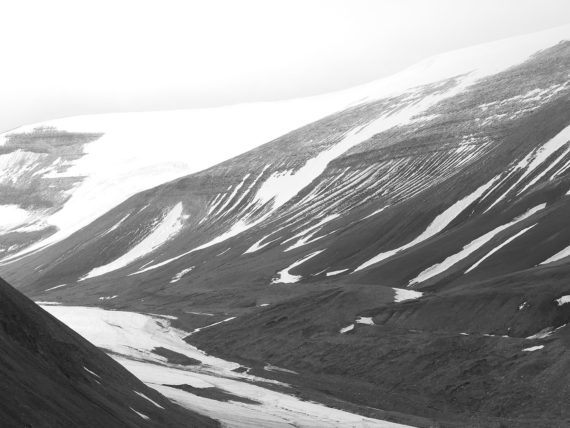 I spent August hiking up mountains and glaciers, learning to use a rifle safely to prevent polar bear attacks, recording the sound of methane, assisting in cutting-edge science involving tea-bags and cryoconites, being caught in white-out blizzards on ice-caps and driving deep into the heart of a frozen mountain to visit a working coal-mine, where ice crystals grow on the coal-face. I am now deep inside the Geography Department at Sheffield on the Leverhulme residency, making work from my research in Svalbard. You can see the results of the residency in ice report and there will be a public exhibition in March 2018 in Sheffield.

Huge thanks to A-N The Artists Information Company for the travel bursary, to Galleri Svalbard for the welcome and beautiful place to stay, to Andy Hodson for his knowledge and generosity and all the staff and students on AG340 2017, to the Leverhulme Trust, everyone in the Geography Department at Sheffield University and to all the artists and art professionals in Norway that I’ve contacted.