Last night I read an article published in last Thursday’s Scotsman entitled ‘Artists forced to survive on £100 a week’ reporting on findings by the Scottish Artists Union (SAU) that three -quarters of visual artists in Scotland are earning less than £5,000 a year. The article compares this income to the severance pay of £60,000 given to Creative Scotland’s chief executive Andrew Dixon after his recent resignation.

The piece also reported the SAU’s demand for a minimum-pay rate for artists enforced via all publicly funded bodies and organisations to re-dress this situtation. http://www.scotsman.com/the-scotsman/scotland/arti…

There were 64 comments in response to the piece, the majority of which were hostile towards artists.

“That lot need to get a job. If they want to have art as a hobby, they should not expect the rest of us to subsidize them”

“I know one or two artists from working class backgrounds who do indeed work elsewhere to support themselves – painting and decorating, webdesign and son on. Maybe it’s the posher ones who just want hand outs?”

” I must ask the question. What is arts contribution to the society that is meant to pay for it?..Contrary to artist beliefs, it is just entertainment. Be it visual or performing. Its a means of the privileged to show off their ostentation. People don’t have the money any more so the demand isn’t there… I’d rather see a policeman or road worker or at least something practical…In times of “austerity” ” there is no cash to pay for concepts, visual or otherwise. Not whilst we can’t afford to pay the engineer to fix the road so we can get to work.”

Reading through the comments, I felt shocked, and almost winded by the virtriol directed towards artists. As a Scot (based in England for the past decade) I feel ashamed by the attitudes of my fellow country folk. In Scotland theres is a long heritage of innovation and excellence in the arts which has and does enrich our lives in untold ways, brings in huge revenues, and is rightly a source of national pride. Yet the prevailing attitude towards artists seems to be one of disdain, and indignation at the idea of artists asking for a living wage.

I’m trying to figure out why this is, and how it might fit with Hans Abbing’s theories on art and economics as found in his book “Why Are artists Poor”. Abbing describes the arts as being held in high esteem because they belong to the ‘gift sphere’ rather than the economic sphere. So is the controversy caused by the fact that, as Abbing suggests, the economy is denied (though veiled) in the arts, that money is seen to sully and denigrate the artist’s relationship with art, and that artists musn’t be seen to be interested in money in any way? (“I thought artists did it for love rather than money”)

When articles like this appear, which report on artists pay in an incendiary manner, and seem designed to provoke (The choice of histrionic headline, the forefegrounding the (maximum) wage of featured artist Janie Nicoll of $15k a year) it does not make for a good quality of debate about art and money. But it does do is reveal a worrying misunderstanding about what actually artists do. Also a conflation of artistic value with market value (“If the work is of merit it will sell’) and a belief that the arts shouldn’t be publicly subsidized.

I feel for Janie, who I know as an extremely hardworking artist with a committed and socially engaged practice, who is also involved in campaigning for better conditions for artists. She does not deserve to be the target of anger and ignorance.

I’m also perturbed by how we as artists can counter these attitudes and dismantle the myths – so that one day (soon ??) it might not be seen as an affront to expect to be paid a living wage, but as a reasonable request, as with any other profession.

I have a few copies left of Issue 1 of ‘Reciprocity’, a zine series which documents my lookings and findings into generosity, alongside this blog. Issue 1 is a 44 page publication, and is a collation of material from my first month of research.

In the spirit of the season I would like to give these away.

If you would like a copy, please email me at [email protected] with your postal address. 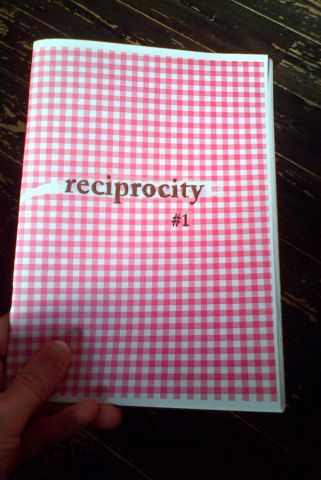