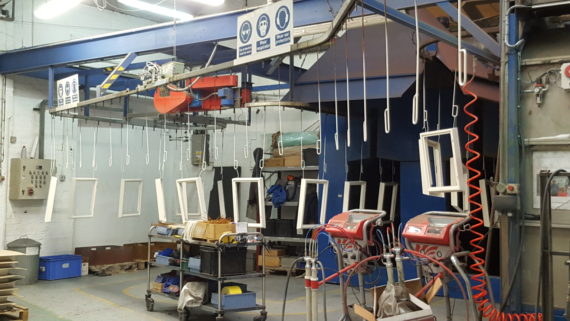 I am very pleased to have new work from the Return to Ritherdon project exhibited in MAJOR Conversations: the industrial narrative exhibition at Platform A Gallery, Middlesbrough UK

As heavy industry declines in the North of England, an understanding of areas with strong industrial heritage and identity have often been distorted by a ‘fog’ of political discourse and ideology; a rhetoric that has often obfuscated much of the personality and You atmosphere within its regions.

This exhibition contributes to the discussion through creative endeavour and viewpoints that may augment, or even subvert, a widely accepted narrative. Being an artist born in, or practicing, within these areas will inevitably prompt a reference to industrial heritage, albeit very often subconsciously.

The artists selected for ‘Major Conversations’ are connected to the North East and North West regions. They uncover a social reality and a lived experience within their work that runs alongside many other creative, intellectual, political or philosophical concerns.
Art and Industry have historically suffered an uneasy relationship since the Industrial Revolution due to the anxiety of certain eminent writers on art. John Ruskin famously feared that the ‘drawing styles encountered by workers were all industry and no art, dreamt up and imposed from without by enemies of creativity’. His opinion that art should draw upon the beauty of nature rather than the ugliness of industry is subtly countered here in ‘Major Conversations’.

Some artists in this exhibition may well explore the notion of amalgamating both artistic and industrial environments, but essentially it is a sense of place, emotionally ingrained into the artists’ sensibilities, that emerges naturally within their creations: a cultural legacy that has inexorably embedded itself into their consciousness and subconsciously informed many artworks.

These contemporary artists are explored within the context of a 19th Century artist, Theodore Major; a Wigan painter whose practice concerned the social & visual impact of heavy industry at that time. By juxtaposing Major’s violent industrial dystopias with contemporary work, the exhibition aims to explore reciprocal narratives and inter-generational connections that increase our understanding of the relationship between industrial heritage and art practice.

The exhibition is the first stage of a touring project that will expand the number of artists involved when it travels from the North East to the North West of the U.K. to test and broaden the narrative. Conversations and experiences surrounding both the exhibition and the arranged seminar will enrich the next part of the project; an exhibition that will take place at the Turnpike Gallery in Leigh in Feb-March 2020.

This exhibition is a collaboration between curator Mark Parham and Platform A Gallery. 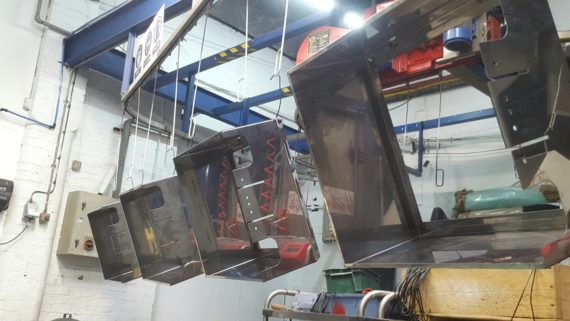 In an effort to begin understanding the internal workings and overlapping operations of each department, I will be spending a bit of time shadowing staff throughout the Ritherdon factory. First on the agenda is the ‘Paint shop’, which predominantly produces powder coated components to be assembled into the final Ritherdon products, along with a very small amount of wet spray paint process.

During my previous time spent at Ritherdon, I have been totally and utterly seduced by the paint shop. The matte powder melting in the oven to become something hot, glossy and perfect is particularly visceral and sexy. In part this is thanks to the surface quality of the metal. Another reason is never being able to witness the melt happen in the ovens first hand. The visual of the process can only exist in the imagination. The liquifying gets done in the pitch black at 180 degrees. That’s hot.

This reflection helps me get my head around the first few works made in the ‘Dead powder series’ (Images above by Jules Lister). The ongoing series is tied to the output of Ritherdon products during the period of time I will be in residence there. The steel support for the work is surplus ‘negative shapes’ left over from completed jobs.  The dead powder coating the support is lifted from the IBC waste tub which collects all the powder cleaned out of the booth in between colour changes throughout the day. The steel and powder are combined to make the work on the same day they both become waste, forming a kind petrified evidence that a process occurred, while the product itself is shipped off somewhere to complete its functional destiny. The powder is applied to the steel by hand in order to retain the chunks of colour present in the layers removed from the tub. The close up photo above shows places on the works surface which became overloaded, and therefore sag in the ovens during liquification. These are the points of interest in which the whole process regains a bit of autonomy. Nobody has any agency over the works when they go in the ovens, so I get what I’m given when they come out the other side. If I’m lucky, its a thick drooping skin made of a million pieces of multi coloured powder. Living the powder coating artists dream?

Another thing I was very pleased to have working experience of was the stopping and starting of the line (the system which transports the components through the whole process). I was expecting the line to be moving at a much more consist speed than it actually was. This wasn’t because of inefficiency- the Ritherdon team get the job done in good time!- but because the larger items require more load, spray and unload time than smaller ones individually. Due to the factory working to the ‘Just in time’ approach (a customer makes an order and the factory produces the item in a short turnaround, as apposed to mass producing in anticipation of a customer order later on), an order of large cabinets might be followed by a large order of tiny products that can be loaded quickly but take up more space on the line. Managing the loading, spraying and unloading of these objects with completely different demands on the same line was super interesting to be a part of (industry nerd alert!). It was like juggling, if juggling involved the chemical treatments and heating of metal objects, the order of which was decided by an external force.  A super example of a system within a system within a system recurring being managed by well practiced intuition, patience and muscle.

Many thanks to Pete and Matt for letting me shadow them in the paint shop, for answering my barrage of questions and for showing me some of the ropes.

During my Art in Manufacturing residency at Ritherdon, Lauren Velvick kindly visited the factory and wrote about the project (you should read it here on Soanyway: https://www.soanywaymagazine.org/issue-one ). In the writing Lauren mentions a conversation we had about seeing functional things existing in industry – for example the luxuriously clotted paint coated multi coloured fibre backing of the wet spray booth- and agreed that we have seen this sort of object appearing in contemporary art a fair bit. I think the next post will be dedicated to unraveling my thoughts about these experiences.

I also recommend following lauren on Twitter for some art world insights: https://twitter.com/LaurenVelvick

And my Twitter/Instagram for real-time Return to Ritherdon updates

I have Returned to Ritherdon! All the catching up, calendar sharing and phase one sounding out is now complete!

Here are a few initial points of focus:

Moving forward, Ritherdon have kindly allowed me spend a bit of time assisting the knowledgeable staff in each department, to understand daily and not-so-daily occurrences.

I am interested in systems of value, function and circulation within places of industry, manufacturing and fabrication. My practice weaves in and out of existing workplace ecosystems, disrupting the traditions of production techniques. The parameters for my sculpture, site responsive installation, drawings and videos are informed by relationships between people, materials and processes. Recent works respond intuitively to the architecture of a site and echo the initial production process of the work itself. Therefore each work is rooted in existing infrastructure, but remains outside of it, as an additional outcome or expanded way of operating. My work often features detritus loaned/exchanged from places of industry, and become a kind of currency. This temporary appropriation creates an additional micro-cycle within the materials timeline, referencing its inherent recyclability and fluctuating states within its functional lifespan.