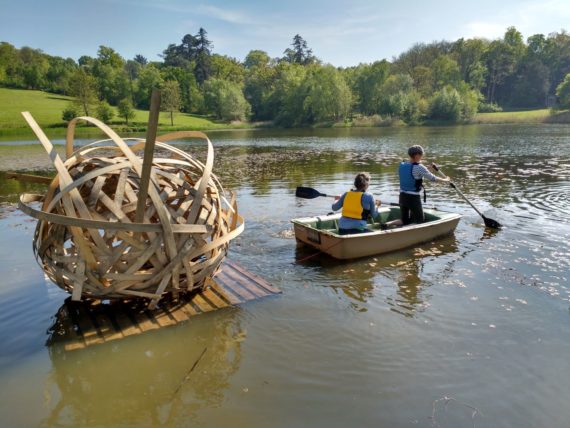 ‘The art work that goes wrong’

Yesterday I went to see ‘the play that goes wrong’ and it was hilarious. It struck me that there was a resemblance between the work I have made this week for Revolution and Resonance 2017 and the various moments of farcical humour that develop through cause and effect in the play. In the alleged amateur production there are key characters all trying to fully be themselves whilst at the same time having to be aware of each other for example, props are left in the wrong place so the actors must carry on ad libbing or just ignore the fact they are standing holding a vase of flowers instead of a note book. In this situation, the inexperienced actor is wedded to the script and does not have the creative capacity nor the confidence to ‘manage’ the situation in front of a live audience.

This construction week I started with a script, props, actors and by the end even had required a live audience. I have stepped between moments of lucid clarity and blind confusion. Reflecting even at this early stage I have to admit that there were a few seat of pants moments when serendipity played a vital role, like an anchor being found onsite just when I needed one or a volunteer turning up just as I needed to go out on a boat or to get sandpaper and perhaps the most entertaining, me realising I needed to let go of the anchor as it fell into the water before I followed it at speed. All of this is inherent in the unpredictable nature of scaling up work, working in the vast outdoors and floating work, so I found myself inadvertently being a ‘material’ inhabiting an unpredictable situation just like the one I was trying to create, a play within a play, performance within a performance.

Volunteers came and were extremely hard working, cleaning, sanding and sorting the oak strips laid out like a huge gappy floor on the grass. Luyba from Kazakhstan, Karoline from Brazil,  Regina from Austria, Dinah from Switzerland, Bayah from Argentina. …

As we worked John French turned up with two scaffold towers and a long pole, this was erected and the scale began to dawn on me….despite this I was still greedy for more and imagined it bigger. Oh the innocence (or arrogance) of someone who has always managed on her own before…

So after scavenging for pallets – the previous week there had been loads onsite- we found 4 that would line up together and which might be approximately the same weight. Such was the scientific method of preparation I was using, we spent the afternoon attaching them together and then tested it out on the lake and thank goodness it floated. So far so good, 60 strips of oak were now soaking ready for the next day and the scaffolding frame was up.

Judith Alder my project mentor came with Anna Winter my videographer and again volunteers Dinah and Regina came to assist. First job was to get the oak out and lay it across the middle of the scaffold in a basic basket weave so that I had a framework to start construction with.  We attached straps and winched it up like a giant dead spider using a rope noose over the pole, once anchored around a post we could cross over the lengths and tie loosely with cable ties to form a canopy. Here began a very amicable tussle between engineer minded Annemarie and freestyler rule breaker me. Due to my inexperience on this level I gladly bowed to her greater knowledge of how the woven structure constantly moves. I was aware I perhaps should have been more directive at this stage in breaking rules but was nervous it just would not hold itself together for weeks or months out on the water so was faced with a bit of a frustrating compromise. In these situations I believe its better to just keep going and then make a decision when clarity emerges. This clarity did not emerge for me until the evening and I had got home. I felt very uneasy about the overall shape of the form (in my mind it had gone wrong) which due to my need for scale had grown down into a lozenge or egg shape construction I had walked around it several times looking or rather thinking I was looking at it critically. It was a recognisable shape and I realised very firmly that this is something I cannot work with in this instance. The original drawing was of a spherical form and was looser and more abstract. This shape was dictating what people thought it was from egg to pineapple! What HORROR to an artist’s ears – I can laugh at myself but boy does it matter.

After a night of scheming I arrive determined to destroy the Egg. After all this is a learning experience and it is only a temporary work…. So I bring it down after its execution at the scaffold roll it into the lake and lie on top of it zorb style to try and squash it. It doesn’t really move so after Annemarie and Anna arrive we roll it around more and then get brutal. We bring it back onto the grass and Annemarie, because she knows, because she’s not scared, because its not her stupid egg is delighted at the thought of rolling it around on the grass cracking and heaving as it turns and compresses, groaning with pressure and covered in silt and mud, weeds trapped and still dripping. We stand back a little overwhelmed with hysteria and laughter. I had by now got lost in a new sense of destruction having threatened it with the saw more than once already.

Walking full circle around it from one side, taking it in fully now, it looked like a pebble, from another place a sphere with a growth, from another it looked square but from one side it looked great! And it was this that motivated me to persevere if one side could look OK then with more rolling and trying adding in looser drawn lines of oak it had the potential to be more evocative of the original line drawing.

Adding looser strips worked to achieve this but also revealed a need to engineer them so they would stay in place for as long as possible, it would also be necessary to put them in once it was on the raft as rolling it after would break them.

At this moment I had a brain wave, I should attach the anchor and the rope to the raft now…I thought I was being clever wrapping it around the middle corners of all 4 palettes – I had 8m so why couldn’t I lose one of those metres ensuring it was secure? (I think now I had gone too far and should have trusted the knot and clip as well as the batons we had fixed underneath)

Once we had rolled it onto the raft we positioned it as near to the angle that it had been on the grass as we could, tricky to do with a form this size that looks pretty much the same close-up. Our plan had been to attach it while in the water, this was ridiculous I could now see we needed dry land as a base. All was going well, Annemarie was screwing in the batons I was attaching the loose strips of oak ‘drawing’ with them to give it a more sketchy look. By now we had an audience of visitors who had even come back with more people to watch the launch. Annemarie fended off keen and curious questions grappling with what they saw and being told it was a piece of art work.

We embarked with anchor on board after testing where the lake floor drops steeply away, I was keen for the anchor to catch and not let the raft drift right down the reeds at the far end of the lake. It was hard work towing the raft, heavy now with the structure probably weighing more than me but we got to the edge of the water lilies, dropped anchor and the 3 dimensional drawing really did drift and move on the water with the wind. A dazzling moment mixed with a sense of disbelief I had actually managed to pull it off, just for now anyway!

It was physically an exhausting three days, I went back the next day to put air under one corner of the raft which had got damaged in the launch, amazingly five 4 pint milk bottles were perfect wedged out of sight under the palette. Today I want to go back and lengthen the anchor rope as the drift potential is too limited, this may be very difficult as I had wrapped it to the middle of the raft and this means retrieving the rope and then pulling up the anchor from a rowing boat alongside may prove problematic. I’ll let you know!