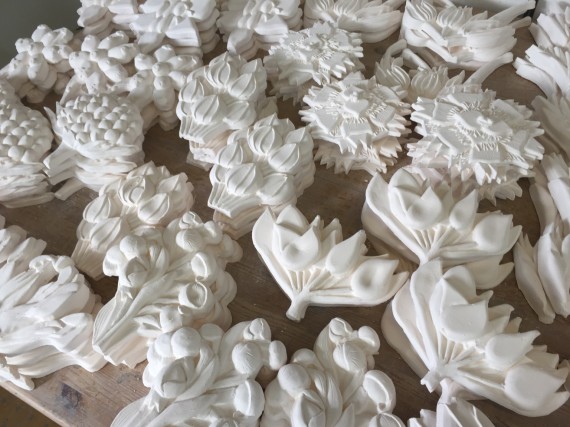 It’s been full on in the studio for weeks now. Therefore zero time for blogging! But I have been documenting the making process.

It’s got to that critical time: one week to go! Can hardly believe it. I know I do have a reputation for being over ambitious and taking on too much all of the time; it’s difficult to kick a lifetime habit like that! But this time it really has been a lot of work. I guess that is partly because, alongside the making, I have been  managing a lot of administrative stuff as well, mainly for the programme of exhibitions, residencies and events that stems from our sound and ceramics collaboration, Landscape : Islands. But now is not the time to tell you about that! The glaze room is calling!

So. I have had the kilns on constantly for the last week or so, bisque firing the porcelain pieces and testing out glazes. All the work is bisque fired now. I spent two very long days/nights mixing up over 30 glazes. Inevitably quite a few of them were rejected because they either didn’t come out well or the colours didn’t work in combination with the others.

My colour palette began with the magnified digital photographs I took of the flora I picked on the walks in Shetland. Looking at the maps on my studio wall with all the photographs positioned according to where the flora was found, I could see that a predominant colour spectrum emerged of purple, yellow, green and pink. So that is where I began.

After the glaze samples first came out of the kiln, I selected colours for designs corresponding to the true colour of the plants.

I began glazing the pieces yesterday. I started off with a plan, but I could feel from the onset I wasn’t entirely happy with it. So after discussion with Joseph, I decided to use the John Cage element of chance, one of the guiding principles behind this collaboration, (In A Shetland Landscape is named after Cage’s In A Landscape). So while I still have a basic idea of what colour each piece should be, I have been haphazardly using other glazes as and when I feel on various designs.

I left the studio very late again last night, with two glaze kilns firing away. I ran out of one crucial oxide, which was probably just as well or I might have attempted an all nighter. So it’s an emergency trip to Seaford to pick it up and then back to the glaze room.