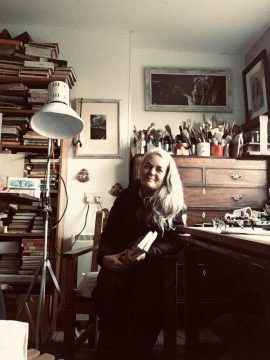 Mainly I am thinking – what on earth to write in this blog today?  A band of rain is passing westwards at the moment, and I really do not fancy going out, not even to draw in the Foul Weather […]

<post by Joseph> Into the final week… I’ve been holed up in my studio for the last few weeks trying to figure out how to organise my large archive of recorded material to make the final piece(s) of work. It’s […]

Post by Kay It’s been full on in the studio for weeks now. Therefore zero time for blogging! But I have been documenting the making process. It’s got to that critical time: one week to go! Can hardly believe it. […]

My first thought is that I have already broken my self-imposed rule for blogging every day. The good news is we gained an extra 3 (significant) pledges yesterday and are now up to 8 % of our target – which […]

I’ve decided we’re going to blog every day whilst our crowdfunding campaign is running on indiegogo. So the latest update is we have reached 4% of our funding goal in the first day. If we keep going at that […]

(Joseph) My memento mori for the trip – recorded out of the window late last night at high tide. I’ve applied a lo-cut filter to minimise the sound of the nearby harbour boats and the constant generator hum that comes from them. Goodbye Shetland […]

(Joseph) Almost done and definitely half a mind (most of the time) on going home now… It felt like the Open Studio was the last proper day of the residency. Today was taken up with admin at the booth, followed […]

(Joseph) A day off… A chance to explore and be tourists for a day – with the mics ever present, recording as we go… First stop, the Horse Fair at Cunningsburgh, on the same site as the recent agricultural fair. […]

(post by Kay) Open Studio Day… The last leg! Setting up took all day in the end. We turned the basement room into an exhibition space. I put up a display of maps showing which walks we went on and […]

After an uneventful day working away in the booth whilst the rain continued to pour down outside, the skies finally cleared for a while and we headed outside. I didn’t have a particular plan in mind, but I thought it […]

(post by Joseph) It was a bright day and we took ourselves to the Sheep Dog Trials at Skeld. Our friend Rob from Yell who entering his dog, had given us directions, “drive to Skeld and look for a bunch […]

(post by Joseph) Today was the day of FOG… It was also a day of very productive meetings with various potential partners and local arts professionals, to try and construct a viable project that can attract public funding. We know that […]

(post by Joseph) Well, it’s Day 19 (gadzooks!) and we’ve come to Mareel in Lerwick to use the internet and to get out of the Booth for a few hours. Today has been a day for arranging meetings – setting […]

(post by Joseph) Took advantage of the spectacular weather today (after an extraordinary fog-filled early morning) to start filming a promo film. We’re thinking of starting a crowd-funding campaign to raise money (it seems like a suitable fit) and so […]

(Joseph) Well, the weather today couldn’t have been more different than the last few days. It’s been warm, bright, sunny and generally glorious. We decided to take a trip to Unst with two objectives: 1) to record a colony of […]

post by Joseph) A day of rain… A day for staying indoors and catching up on sound and photo editing and compiling. We took ourselves out briefly at midday to go and visit a couple of knitters near Cunningsburgh (one […]

(post by Joseph) Today we went to the Cunningsburgh show! This is the biggest agricultural show in Shetland. The post is subtitled “Old MacDonald” after the sound file below… You’ll understand why when you hear it! I had fun recording […]

(Kay) We have been blessed with two days of extraordinarily good weather (for Shetland, that is. Between 13 and 15 degrees but when the sun shines WOW!) The colours of the landscape have to be seen to be believed. Such […]

(Kay) Today we had a very useful meeting with Howard Towll from Shetland Amenity Trust. Howard is a ranger who knows the islands inside out – the geography, geology, natural heritage and basically everything we needed to know. The main […]