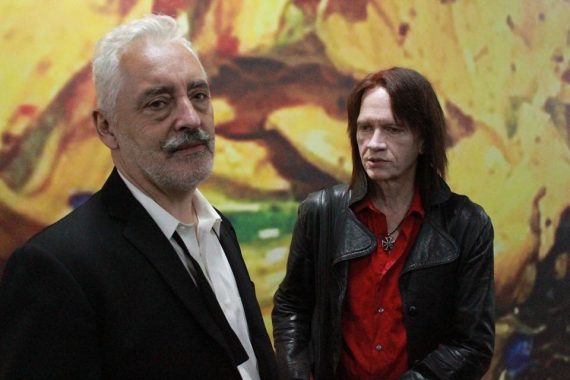 Millree Hughes is seen here with legendary filmmaker Nick Zedd at the opening of our Involuntary México show in Metro Hidalgo, México City. It’s so good to see Nick there along with many from México City’s vibrant art world, metro workers, art lovers and commuters. Some of them I’m sure fall into all those categories.

It’s been said to me on more than one occasion that the Involuntary Movement is against the art world, that we undermine the skill of real artists by displaying bits of decaying crap, spills, damp patches, signs, the sounds of spin dryers and the like as though they were paintings, sculptures and music. I really don’t mind that they think that. That they think that speaks more of what the involuntary concept is about than perhaps myself, Millree Hughes, Aldo Flores and others involved with the Involuntary Movement ever could.

Nick Zedd (pictured on the right next to Millree above) coined the term Cinema of Transgression in 1985 to describe a loose-knit group of like-minded filmmakers and artists using shock value and black humor in their work. I’m not sure you could say that in general the work and ideas of the Involuntary Movement is shocking (though some might be) but there is a sense of playfulness and dark humour underpinning many of the ideas, actions and shows produced by the movement. Maybe we do transgress when we suggest that there are things out in our streets that aren’t art but could easily be mistaken for art and that might act as mediators between us, our everyday sometimes banal surroundings and other worlds, otherly thoughts, art histories, dance, the spirit world, baby doll nighties, neon lights, poetry, fine art, pornography, crochet, crap TV and more…

THE GALLERY OF THE STREET IS OPEN!