Its a curious one this one, Elle have just released in their December ‘Feminist’ Issue so in the context of making sure my line of inquiry is responsive to current political and social climate I felt I needed to read this.   Also, its a fantastic coincidence that the very magazines I have been critiquing as partly responsible for the sexualisation of society; consumerism hunger and sound bite issues of the 21st century are exactly the vehicle for promoting the fact that feminist issues in 2014 are still relevant today to young women.

In all fairness, the words that should perhaps be used now are EQUALITY as Feminism as a word still carries connotations of negativity to women especially where it is confused with being anti-feminine. And so it is with some irony that the cover advertises the contents as Feminism and also ‘new bags shoes and jewellery’.  And despite starting the debate on page 193 and finishing at page 231 they make a strong but current and sensitive report on the current political landscape.  Key points:

Emma Watson is now the UN Women Good Will ambassador and it follows her recent speach to the UN.

Rebranding from Feminism to Equality may be an easier sell

Reference to #Im not a feminist recent trend on twitter.

#heforshe campaign now launched by Emily Watson as an agent for change to persuade men to engage in feminism,..arguing that in the past the message has been misdirected at women only and the need to readdress the balance to allow for change.

Perhaps more disturbing is the apathy from women from survey results ….unaware of the issues?

Promotion of female politicians views and not their shoes

So in summary, it may be a little light reading for your coffee table but as something that is current and thought provoking to an audience that is interested primarily in the feminine, it has to be applauded. Well done ELLE and it also confirms my area of research is really strong and current. 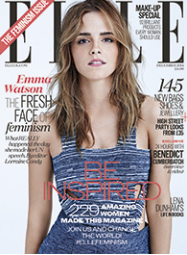