Another woodland walk early this morning found me and Fred walking amongst a village of stick houses? Possibly as many as eight structures erected at a crossroads in the woods. This seemed to take these shelter constructions to another level. These are made for effect and not inhabited and the whole thing puts me in mind of a prehistoric museum installation. It’s as if your half expecting actors dressed in furs with spears to appear through the trees. There are no clues as to why these shelters are being made or who by; I would describe them as being in the crop circle envelope, if you see what I mean. All I can say about them is that they are made from logs piled up by Kent Wildlife Trust woodland management teams who have coppiced or thinned an area of trees and stacked the logs in tidy piles. People basically using these stacked logs to build these shelters?

Well what did emerge through the trees as an old man with a cane with a metal tip and a quite a large dog. He was a very engaging man over 80 he told me wearing a white checked shirt, stone washed jeans held up by heavily patterned braces (possibly paisley). He began to tell me what kind of dog he had, but I never got to the bottom of it! It was something to do with an Alsatian, a pub called the Gateway and generations of dogs. It was two years old and could run like the wind as it had greyhound ish make up. Fred chased this dog and ran himself into the ground trying to catch it. While this was going on I had plenty of time to hear this man’s story about hare coursing, hay barrels and beaters in the trees. But again, it never reached a clear conclusion, lots of detail about yellow flags and red flags and the cleverer of two dogs involved going around the back, but just how they caught the hares I remain a little confused. What was clear, as he mentioned it several times was that he was going to Quinney’s, a local firm making fences and log cabins and the like and he walked on with his Alsatian/Greyhound. 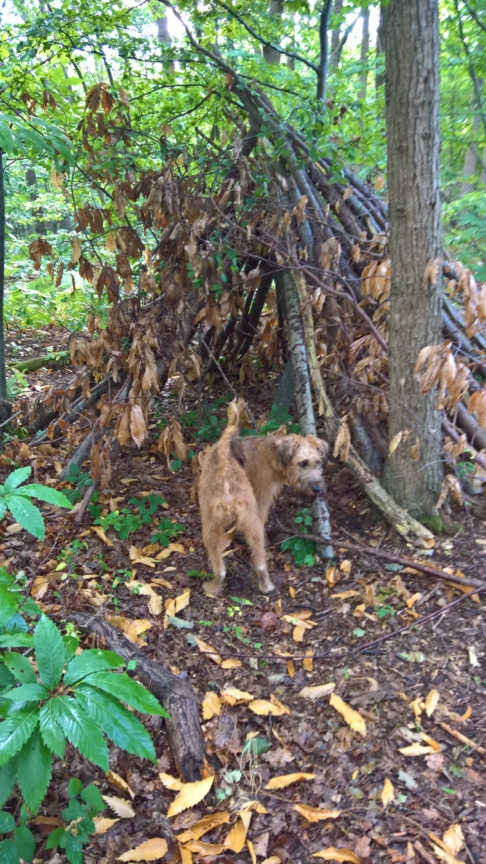 Five minutes later I see him in the distance behind me. You’re not going to Quinney’ after all? I don’t feel like a repeat of the chasing and charging about that had just finished. It had all got rather lively and Fred had run into a tree in all the shenanigans ….. to no ill effect it seems. But I didn’t want things to get out of control again. So, I hastily walked on and shortly saw a jeep parked at the edge of the woodland. This was his dog walk before going to Quinney’s and he was on his way back to his car.