The thing I have noticed is that there are fewer places to walk with Fred, compared to 4-5 years ago with my previous dog Cosmo. The biggest loss is the old Golf Course and I do miss it. I am aware I have not been over there for about a year, but they closed the footpath temporarily as the whole site is being developed for mainly residential housing and some retail and leisure facilities. I have a blog following the changing use of the site over a number of years. I will go over and explore, as I can see that there are a lot of new homes built and people are living there. See my blog https://www.a-n.co.uk/blogs/over-the-golf-course/. The other thing that has happened is that agricultural land on the outskirts of the town has also changed use and the fields are now covered in solar power panels. This has had an impact on my dog walks as I used to access the woods through fields just behind the town, sadly no longer possible. I have to say that the woodlands are extensive and coastal paths are still all dog walking favourites so I can’t really complain, but I did enjoy the variety and changing landscapes.

So: we walk in the woods a lot now which is great and I enjoy that as much as Fred. Who looks for squirrels as his main priority. He darts around covering large areas, back and forth, over and back. He jumps up completely vertically, which reminds me of a harrier jump jet. This is to gain a better view and see what’s around. Fred’s eye view must be bracken and shrub so every now and then he pops up for a better look. He often disappears for periods of time and I cant see him, and as I reach a crossroads or fork in the path I have a decision to make. Do I whistle and call him to show him which way I’m going, or do carry on and let him find me? Today, he had a particularly long foray into the trees and was AWOL for one of his longer spells and I came to a T junction. I carried on deciding to let him find me and give him no clues to which way I had gone. I walked on for a bit and still no sign of Fred. It was a long time and he could be anywhere by now as the T junction was way back. So I decided to break my silence, and whistle as I had got anxious doing a silly stand-off thing. I whistled very loudly hoping this could be heard over a 1000 yards or even more as I had no idea where he was. After literally a couple of seconds he was there right there running towards me! He knew where I was all the time and I had caused myself anxiety for no reason.

We met Dylan, a large standard Poodle who had a new hair cut called a short back and sides. This means the top of his head is fluffy and mop like and so is his tail. The rest of him looked like a plucked chicken, sometimes they leave hair around the feet as well. But Dylan walks in the woods and would get muddy legs so only the top of his head and tail survive the shears. Its an odd look, but hey-ho not my dog. Dylan had eaten his Xmas present this morning, stolen it from the kitchen side. All 10 bright green rawhide chew-sticks eaten altogether. Dylan had bright green squits this morning – apparently. I think Fred likes Dylan and they chase each other for as long as you would let them.

But the main news is I have made a small printing press with a hydraulic car jack. I have used it and it works just fine. I am very pleased as I probably only spent about £50 – £55 altogether. The plan is to focus on lino cuts next year, a new area/medium for me with much to discover ahead. I have started with a series of ‘Tree Spirit’ prints already inspired by our dog walks through the autumn. I am enjoying the process of print making. It’s all process until the final thing right at the very end. You never know exactly till the last-minute what things will be. Rather like mosaics come to that.

It is called ‘The Redfred Press’ and I’m working on it after posting this.

As you know Fred has his own Instagram account https://www.instagram.com/the.redfred/ and as it turns out Fred is part of an Irish Terrier Community out there on Instagram. Now… a few blog posts ago I mentioned a walk to find an abandoned car. Someone with a relative of Fred’s must have read this blog followed my map and found the car I was talking about….took a photo of Missy Aileen and posted it on Instagram showing their dog with the car behind. Amazing they engaged so totally. I like the sense of belonging to some kind of group, its strange that has happened with a dog owners’ group. I have artist friends, as well as blogging friends on this online community, but its not art we share.

I would like to meet them one day, I don’t think they live that far away. 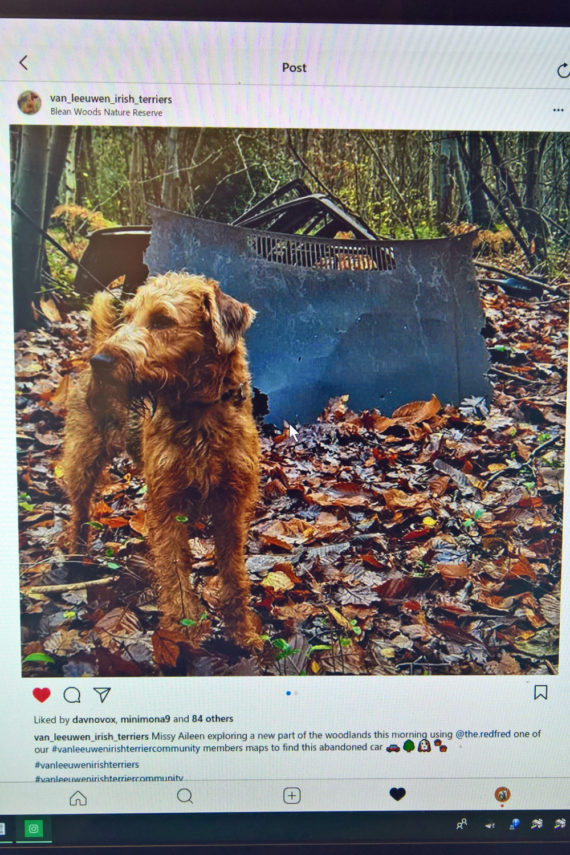 Anyway, I meant to talk about a small plastic toy figure I picked up in the woods. This small brightly coloured toy contrasted highly with the mud and I picked it up straight away, quite excited to see what I had discovered? Washed it in a nearby puddle and was rather disappointed. What I had hoped to find was that this was going to symbolize Celtic Woodland Spirits in a way described by Jon Bowen on the comments to an earlier post. What I wanted it to be was something which looked like it could harness the powers of nature and make trees change colour, make animals appear and talk and make accidents happen to unwanted visitors to the forest. It was female and it was going well at first. But: She turned out to be made by Fisher Price and was holding something like a golden 99 ice cream cone. She was part of a brand of toys called ‘little people’ which probably have houses or palaces which look like they are made of icing sugar. She was small and round with a tiara, but I felt she might have been closer to home baking or cup-cakes, very cosy and homely and rather heavy for her height. I do feel someone with muddy shoes would have repulsed her and wild animals would be hideous creatures which cause trouble and upset people. Strong winds, heavy rain or cold temperatures would be things she would avoid at all costs.

Not the wild forest spirit I had wished to find.

I have brought the toy home and it is in my workshop. I had thought by ‘using art’ it would be a relatively easy task to create what I wanted by drawing it based on this toy character. It did not happen easily and after a few drawings I realized this was perhaps not the right source material, even though I really wanted it to be and the idea has been shelved, waiting for further inspiration. Perhaps celtic coins would be a better starting point for forest spirits?