When the dust had settled this morning after a bit of a stand off with Fred about attitudes and behaviour, we set off for East Blean Woods rather later than usual! The trees were spectacular and we saw a few more people […]

Not a very nice morning drizzly and wet, as I am leaving the house, I realise the shoes I’m wearing are not suitable for muddy woods so I we walk along the beach the tide is out. One of Fred’s […]

Reculver Country Park This morning’s dog walk was a joy, one of those walks that just ticked many of the boxes why I like dog walks. Yesterday evening was the opposite as it was cold, wet and dark and every […]

We have been down the woods a few times recently. Looking at the colours and enjoying the walk not thinking much just experiencing the landscape. Fred is off searching and I’m just looking at the trees in a strange ‘semi […]

Fred has cut his back leg and does not seem too fused about going out this morning. He is curled up comfortable – lots of licking going on but generally seems Ok. I think he must have cut his leg […]

I like the groyne works on the seafront. We walk together towards the town along the pebbly beach. I am climbing over the old groynes, ones that are not being replaced and the weathering and action of the tides has […]

Fred has two types of walks those on the lead and those off the lead, this morning was an on the lead walk. On the lead walks are generally into town and at the moment the favourite is to the […]

Tonight’s walk was in some ways the antithesis of the one described in the post before, and again it was dark in the evening in the woods. This time the ‘incident’ happened early on and involved other dogs, not with […]

I have been watching Fred while we have been walking together. He has been made very differently from me, and his interpretation of his world is very different from mine and it is hard to understand his behaviours. We project […]

We drove through an estate of static homes before our walk. What interesting places static-home estates are. Fascinating – but a blog for another day perhaps. It was a woodland walk again for me and Fred this morning. Woodlands being […]

We had a short walk on the lead this morning, as I was uncertain about Fred’s leg (I needn’t have worried). Last night he rushed head long into the garden barking in over excitement at catching a cat, he clattered into the forest […]

Another woodland walk early this morning found me and Fred walking amongst a village of stick houses? Possibly as many as eight structures erected at a crossroads in the woods. This seemed to take these shelter constructions to another level. […]

So I will begin by saying Yesterday’s outing to the copse with Fred went very well (relatively speaking) compared with the walk this mornings walk in my local woodland. The Copse is open to anyone including local children on holiday […]

This morning the sun was out, the tide was out and the sparrows were nowhere to be seen. Instead the seagulls were out, right out on the flats between the beach and the sea. This was the ideal pitch […] 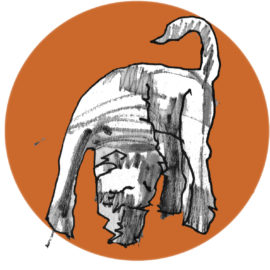 We walk in the woods together: Fred is an inquisitive Irish Terrier who is maturing and mellowing since being a puppy. Rob is an artist realising that these woodland walks are integral to a subliminal creative internal processing. We enjoy walking in local woodlands every day.

The Last Post Cosmo’s Post A couple of days ago I installed Cosmo’s Post in the woods. I got permission from the owners of the woodlands, who were very understanding and allowed me to make the tribute. I made it […]

A mainly visual tribute to my companion Cosmo on his final walk. My work mate, my shadow, my muse and my friend. A big miscalculation, I don’t think the formula of 1-7 years works in relation to dog and human […]

The first last walk, though I didn’t know it, was ‘Over the Golf Course’. We went at the time when all the children were leaving school making the roads busy, ribbons of students along the pavements. The streets full of […]

I noticed another solar farm project being installed only a few miles away, that makes one completed and two currently under construction. Me and Cosmo went to check it out. I thought the first hurdle would be navigating the stile […]

I want to carry on with the residential estates theme so our walk with Cosmo today is what we call the normal walk, but I will walk a little further along the sea front to Sea View Holiday Park. This […]

So as a contrast to the Rabbit Shaw walk in the last post I decided to walk around behind a less salubrious estate, the phrase ‘council estate’ gives a mental picture of what might be ahead. As we walk through […]

No….I’d got it all a bit wrong. I wanted to take photos of Red House Farm and planned a walk with Cosmo to go past it, or around it and take a few photos. I had made a red pigment […]

It’s one of those dog walks that are really just a chore. It’s cold quite blustery with rain sort of coming and going from time to time. It’s unpleasant, not bad. This makes no difference to Cosmo in the slightest, […]

I have decided to walk in the woods and see if the three boys I met the last time we came here constructed anything? At about dusk we reached the pond that they mentioned and I noticed a sturdy wooden […]