I have been watching Fred while we have been walking together. He has been made very differently from me, and his interpretation of his world is very different from mine and it is hard to understand his behaviours. We project our own values onto dogs and judge them according to our wants and desires.

We have recently returned from a break away from home and Fred was not included in our plan. He was to be looked after by a ‘Host’. Shall I just say things did not pan out the way we had planned and since returning I have tried to understand his world a little better.

Anyway: back to walking where I can see Fred is not comfortable walking alongside busier roads, large loud lorries, noisy fast cars upset his equilibrium, and he becomes unsettled and behaves erratically and would, I am sure jump out into the road at them in some sort of confused reaction to what he is experiencing.

We had a long walk in the woods last night just before dusk and by the time we were on the return leg of our walk it was quite dark. I do know the woods very well I have ridden my mountain bike and walked two dogs in these woods for something like 15 years and getting lost is not really a concern, though the dark does reduce confidence and unnecessary worry creeps in and anxiety wafts over me. I tell myself I know the way and I don’t have a getting lost problem. My imagination creates other scenarios:

3-4 Roman soldiers walk out of the trees ahead of me? Are they friendly or will it be a confrontation?

Red Coats with muskets and bayonets sitting on fallen trees, as if hiding in the woods from Napoleon’s army. Will the dog draw unwanted attention to them? A Cavalry Officer rides out in front of me to block my path.

I can see Fly Agaric mushrooms (the red ones with white spots) which have bite marks, possibly made by rodent teeth. Squirrels somewhere totally off their heads? Would birds or even a fox eat these, what does a tripping out blackbird do?

Next is a suggestion of a troll or a giant amongst the trees lurking, watching possibly setting his sights on dinner?

I hear bird noises like I never heard before, surely these are unseen Red Indians.

Fred all this time has been on his usual quest searching, sniffing, scurrying in the undergrowth, running off, coming back. Stopping to eat a bit of grass and then race off to explore a rustle or flutter. The only change in his behaviour would seem to be that perhaps his forays away from the path are not as far from me as they might be in daylight.

Then I hear voices, in the distance I would say at least three. Then a little later I see moving lights and I guess these are mountain bike trail riders with lights on their helmets.

I call out ‘Hello – walking with a dog’.

I don’t know where Fred is I can’t see him, but I know he has in the past chased mountain bikers and cyclists. I need to make these guys stop, so I can get Fred on the lead before he follows them I don’t know how far? There he is, captured for half a second in a frozen silhouette with a white line all around him as the lamp light lands on him. His Stance reminding me of The Monarch of The Glen by Edwin Landseer, defiantly in the middle of the path. The riders do stop when I explain Fred might chase them and I need to get him on the lead. Meanwhile Fred is running from the first cyclist to the third, jumping up running up to the next, then running back and forth, back and forth. I manage to grab his collar as he careers past me at high speed. He wriggles and twists but he is under control and the trail riders move on saying, ‘We thought he was on his own for bit’. All is well and they pedal away.

Fred has had a meltdown, frenzied jumping and twisting. He is panting very hard and seems unable to put the experience behind him. I sit on the ground and try to distract him with dog treats, but he can only pull as hard as he can on the lead in any direction it does not seem to matter which way! The rest of the walk is tense, a race to somewhere, anywhere in a straight line, just fast. No walking to heal, no treats, no stopping, no sticks go go go!

After about five minutes of this I decide to let him off the lead as an experiment. He won’t sit or respond in any way, still panting furiously. I let him off to watch what happens!

He trots off more chilled than I expected and starts his forays into the undergrowth just as before. By now we are nearer the car and I wondered if he knew where he was, as he was bolder with his runs in what is dark now. I put him back on the lead and the uncontrollable pulling starts again. When the car is in sight he slows down and the lead is slack and he seems more relaxed.

We are back in the car and he is panting wildly.

Was this a tantrum at being restrained or headlong panic? 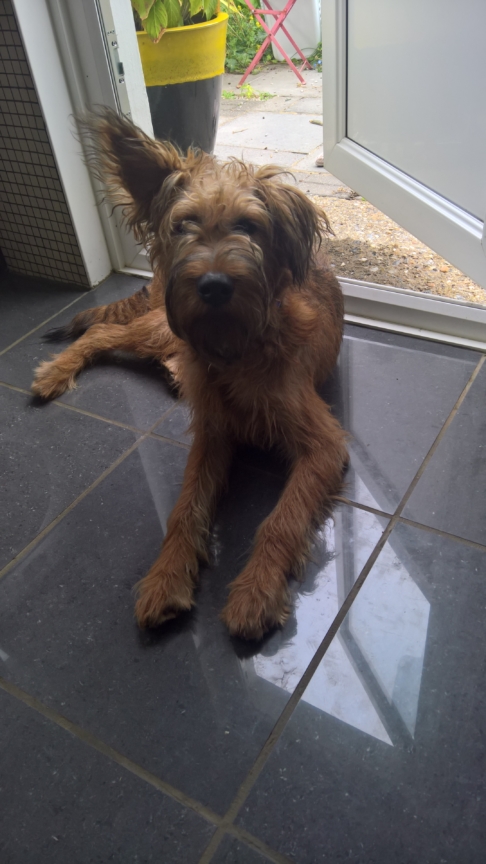